I would like to wire multiple motion detector light kits in parallel, so when one motion detector is tripped it will turn on all three lights. Each light kit has 2 LED lights on it. Schematic and text description below. 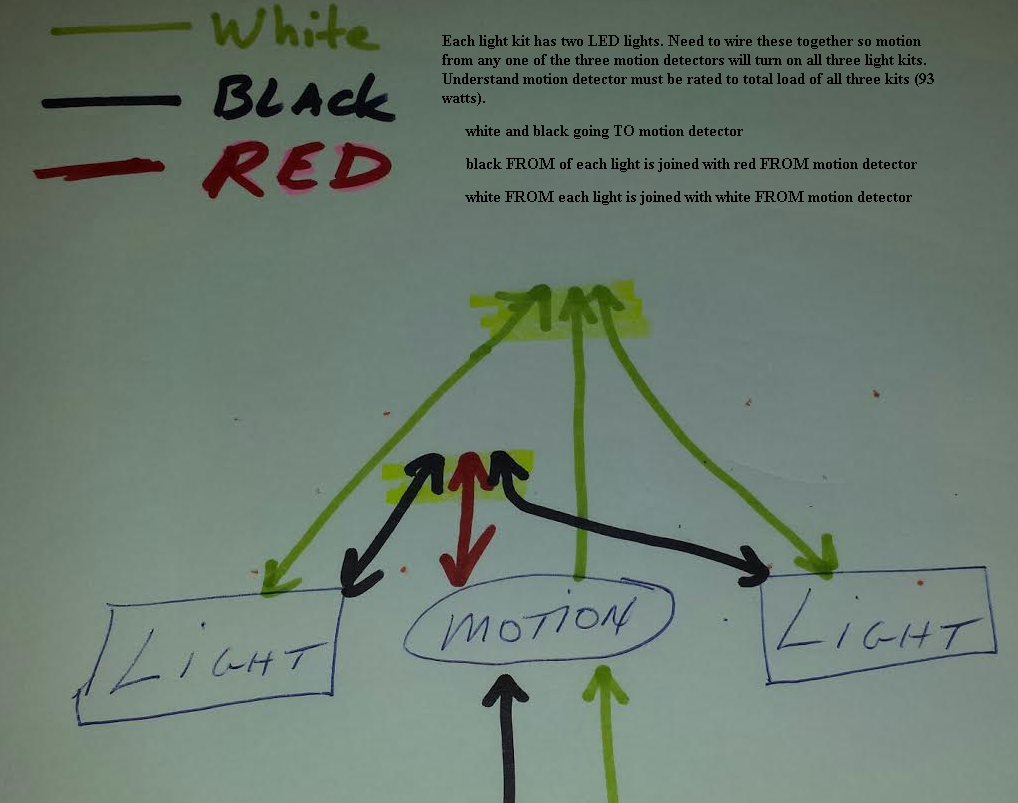 That looks fine. Only thing is, every motion detector I have seen only has one white, and all the whites (neutrals) get spliced together.

At the motion detector:

ALL whites in the box together

Another much broader question was marked as a duplicate to this one, so I'll provide a general answer here. But first, the specific:

In your drawing, note how the supply neutral (lower) is separate from the internal "neutral" (upper). That's a red flag: Likely it's 12 volts DC. These preassembled lamps often use 12VDC internally since the LED heads require it, and 12VDC motion sensor modules are much cheaper than 120VAC ones. So you'll have to test the lamp assembly further to see if it's adaptable.

Many lamp makers don't make sensors or even lamp heads. They kit together common off-the-shelf parts, commonly seen on Alibaba or eBay. If the sensor part doesn't work for you, and you can bypass the sensor and make it an "always on" light, there's good news. You may be able to replace the sensor - many screw into fittings like this, and then proceed as I describe below.

I use separate detectors from lamps (they could be in the same assembly), and here's how I wire them.

First, I use the type of sensor which has its own neutral (rather than the type which has no neutral and sits in a "switch loop".) This is very important. The sensor needs to be able to power itself independently (via hot and neutral) and does not care what is on the output. That means it won't interfere/clash with other sensors.

I run 4 wires down the length of all the sensor and lamp sites. The 4 wires are:

I connect ground, neutral and always-hot back to power supply at the service panel.

For a plain switch (pictured in position 5), use always-hot and switched-hot. It does not need neutral, but Code requires you bring neutral to the junction box.

Each lamp gets switched-hot and neutral. If the far end of the string is all lamps, you don't need an always-hot.

0
How should dual motion sensors be connected?
0
Is it possible to link motion-activated flood light fixtures?
0
How can I control lights on a 3-way circuit with a timer?
1
Motion sensor with bypass switch?
1
How can a circuit be designed with a switched live connected to multiple PIR motion sensors? [UK]
0
Wireless Networked Sensor Light?