How was this subfloor cleaned?

I'm replacing the floor in my bathroom, which was previously a vinyl sheet. Prior to that (and I think original to the house, built in early 70's) it was some peel and stick-type tiles, except they're very hard (they remind of me what would be sold as commercial tiles now). There were some tiles left under the old vanity, and since I'm replacing it with a differently-sized vanity, I figure I'll put the new floor underneath it as well, which means the subfloor has to be flat.

After I scraped up the old tiles, the floor is all black, presumably from the adhesive in the tiles. The rest of the floor though, that was covered by the vinyl sheet, looks like it's had the adhesive cleaned off. 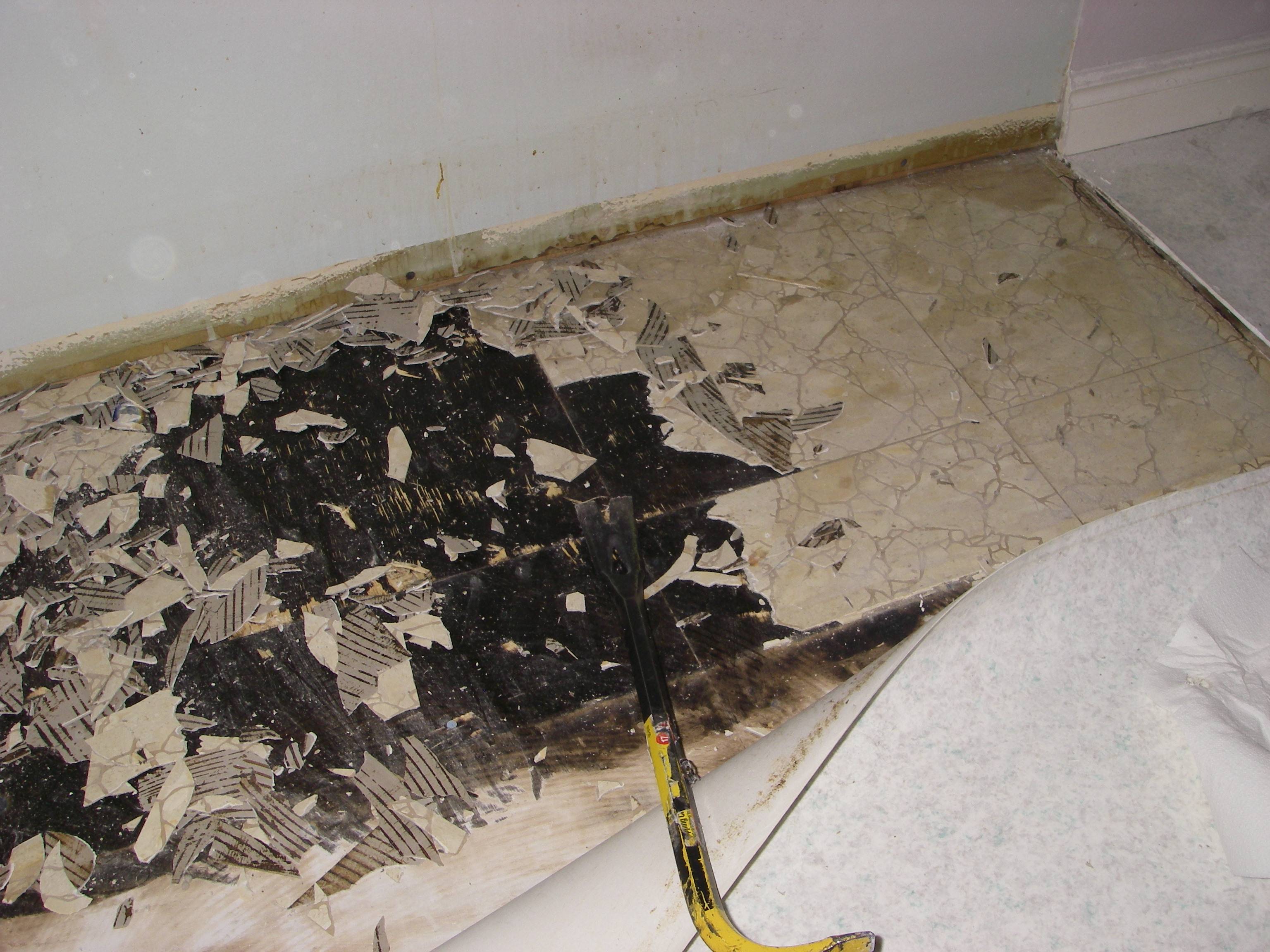 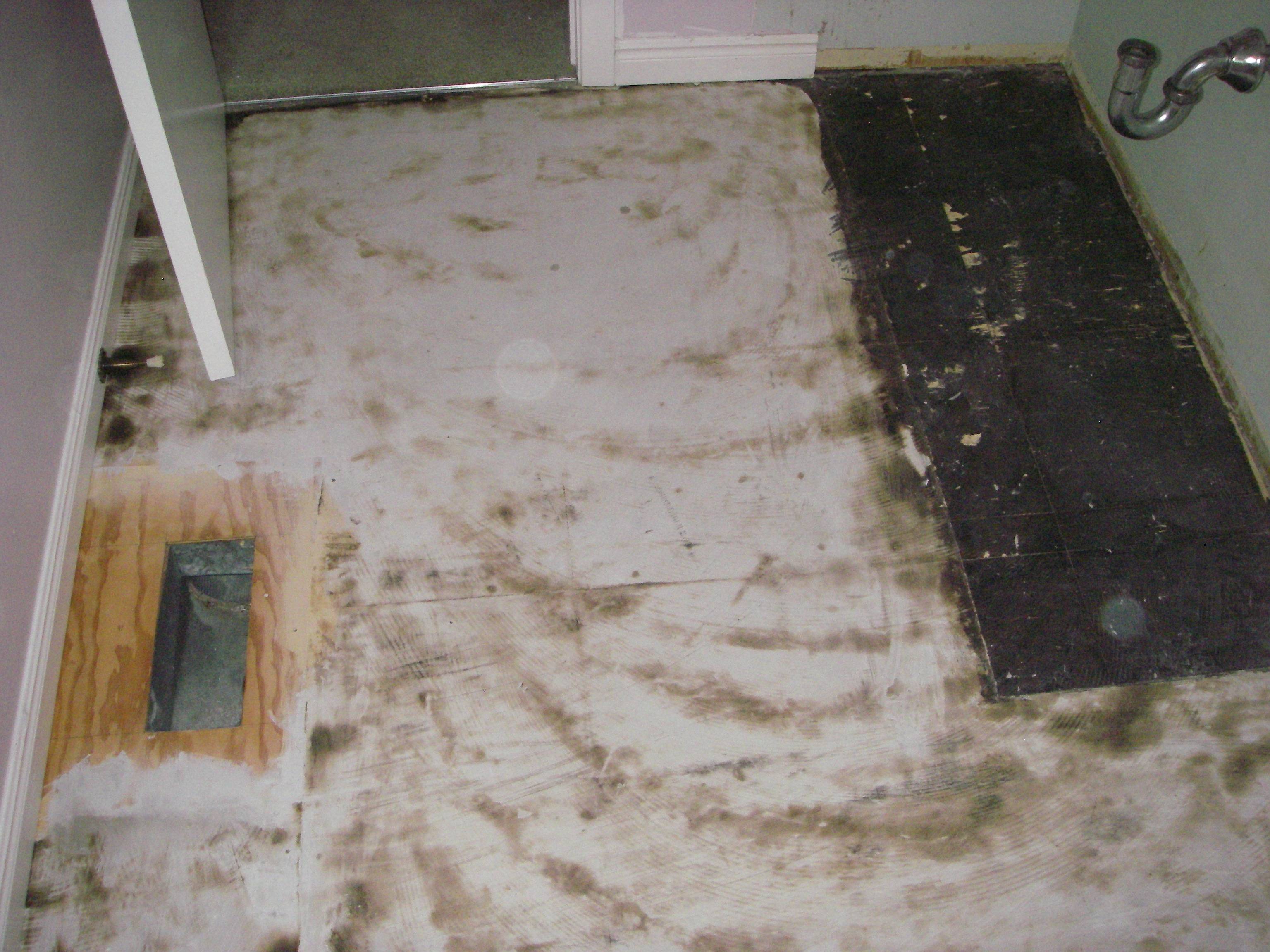 How was this cleaned, and why is it all white now?

The floor was cut exactly to the outline of the vanity, and from the old paint on the wall, it looks like prior to the vanity there was just a wall-mounted sink. I'm going to guess the vanity was installed, and then sometime later the vinyl flooring was installed, as otherwise I can't see how the tiles got cut to this pattern.

I'm putting a floating vinyl plank tile floor in place, and this part will be underneath the vanity anyways (the new vanity is slightly bigger). Should I bother trying to clean this part as well, or just put the new floor over top?

Update: I added a whole bunch of screws to reinforce the floor to the joists below, and help reduce some of the squeaking. In one spot, right along an edge of the plywood, the white stuff flaked off - so it seems rather than being 'cleaned', there's actually a really thin layer of something on top of the black adhesive. There's no noticeable difference between the height of the two sections.

I've since laid the new floor on top, I didn't do anything extra to this subfloor.

What kind of flooring are you putting down? If it's tile, I'd probably reinforce the floor a bit first with a new layer of t&g subfloor before putting the tile down... which solves your problem.

If there's any musty smell, you can clean the floor with trisodium phosphate (the real stuff, not "substitute") ... but don't soak it. Just scrub it with the tsp and a scrub brush. The TSP will probably take up the glue as well... but has a significant chance of eating your plywood in the process. ;)

What you didn't mention was if there was any difference in the height of the two areas. If there is not more than 1/16 inch difference, just scrape the transition best you can and lay the new floor. If there is a real change between the white and black areas, then you have to consider a few options.

1) scraping/sanding higher surface to match the rest of the room.

2) use leveler compound to gradually ease the two heights

3) Scrape the transition best you can and add a new layer of subfloor ( 3/16 lauan or 1/4 " plywood) to bridge the problem area. This will require some finish trim work or removal and re installation of existing trim and undercuts of vert door trim.

Turns out, it was not "cleaned", but there is a layer of something on top (maybe paint) that flakes off. I guess it was there to prevent the newer vinyl on top from sticking to the mastic left from the old tiles.

If someone can answer more specifically, I'll mark their answer as correct.

Not the answer you're looking for? Browse other questions tagged cleaning vinyl-flooring or ask your own question.

8
How to remove old vinyl tiles?
5
How should I prepare a plywood subfloor for vinyl sheet flooring?
2
Trouble removing vinyl tile and underlayment from wood flooring
2
How can I remove residue left from peel and stick tiles?
0
How can I level a transition in a floor before gluing a vinyl tile?
1
Groutable vinyl tile in a laundry room. Is it a bad idea?
0
How to prepare floor for vinyl plank installation over old sheet vinyl
0
Clean or Replace subfloor
1
What kind of underlayment material is this?
0
Particle board subfloor - cover with additional plywood/osb for luxury vinyl plank flooring?