Why are my circuit breakers not tripping?

I live on Vancouver Island. My house is less than 10 years old. It is equipped with Siemens QT circuit breakers. I could not find a specific breaker so I intentionally shorted the circuit at the outlet but no breakers tripped. I did the same with another circuit and again no breakers tripped. I did a third circuit with the same results. I used an old extension cord and cut off one end and bared the wires. Plugged it into the socket and got the expected result, a large flash. I touched the wires again with the same result. Surely at this point the breakers should trip. I think this is weired.

Any help would be appreciated.

I now feel that my house is not properly protected

Standard circuit breakers are not designed to trip instantaneously for all loads. Breakers are designed with time curves they must meet, and for anything but the highest currents there is a noticeable delay from seconds to hours.

Schneider Electric PDF: Your brand/type of breakers could differ from this chart, but the concepts are largely the same for most magnetic circuit breakers. 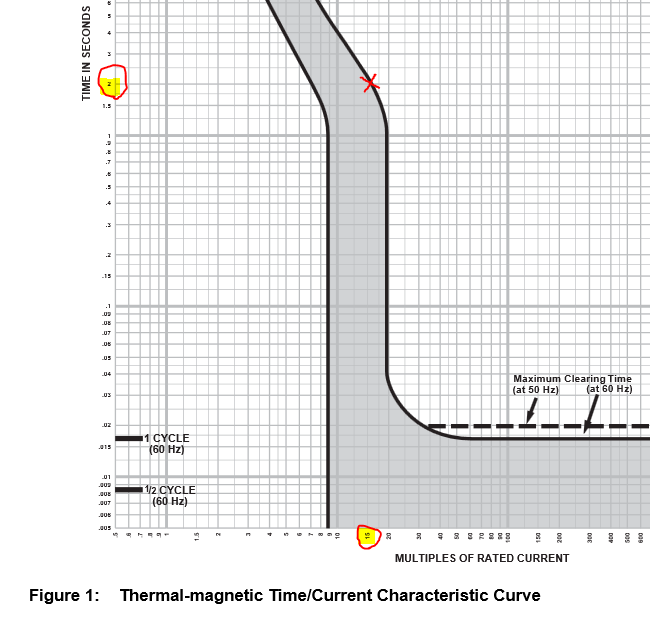 Here's some math provided by Tester101 in the comments below:

I've marked an example on the chart which shows that at a current of 15 times the rated current, it can take up to 2 seconds to trip (download the PDF and zoom in so you can actually read all the numbers). For a 15 amp breaker, that's over 200amps for almost 2 seconds. That's enough power to melt strands of your extension cord and possibly damage whatever you used to short the first two outlets.

When you touch two wires, only a small area of the wire touches, and explosively heats and melts (the POP and spark). I suspect if you stripped the extension cord and used a proper wire clamp on the ends to make a good connection, you might be able to pull enough current to quickly trip the breaker, assuming the outlet doesn't internally melt from arcing when you plug it in.

The main point is that this IS NOT a good thing to do. Tripping a breaker to find it with a short is pretty dangerous, and you can damage outlets or other wire junctions in the process. If there's a wire nut in an adjacent outlet that's not making the best connection, it could melt. Then you have to find and fix that which could be a challenge unless smoke and fire direct you to the problem area.

Plug in a radio, turn it up, and start manually throwing breakers. When the music stops, you found the right breaker. Don't purposely short wires.

i actually built a device that tests breakers, it has 3 switches on it, two are in series between hot and neutral. one is a safety the other is the shunt that when closed after the safety is closed shorts line to neutral, the second switch is wired between ground and neutral when closed it creates an imbalance that will trip the protective systems of gfci breakers and outlets and test the ground fault section of the new afci breakers. it is hooked up using a heavy duty #10 3 wire cord with a small sub panel breaker box in line with a 40 amp breaker in it. i found that it works well and if the circuit being tested fails to open it opens the inline breaker in the test set. not recommended but it is a lot safer than simply shorting two wires together.. and any such a device is at best to be used as a last option dont just reach for the proverbial dead short in a can without first exhausting all other options because as others have said you run the risk of burning the house down.

MCB's were designed to replace the regular wire fuses with the ability to reset a switch instead of replacing a wire fuse. Given that fact, a current over draw needs to be detected with requisite action. The rating of the MCB shows the amount of load possible on the MCB without tripping.

A short circuit is exactly what it is, it will trip even if the current drawn is within the load limit. If that does not happen, please replace the MCB's in question.

shows how unreliable circuit breakers can be, with significant numbers not tripping even at 200% of rated current.

Some brands have some 50% failure rates.

Finding breakers by shorting the outlet may be a good way to burn your house down.

5
Why is my lighting circuit tripping the breaker?
7
How can two different breakers both turn off the same circuit?
3
Three dead power outlets, no tripped breakers
3
Why would a circuit breaker not trip if I accidentally shorted hot to neutral?
5
Different circuit breakers keep tripping, some not re-setting
0
GFCI Tripping after 15 years
3
Is one circuit connected to two breakers safe?
1
AFCI Breaker Randomly Tripping - No New Devices
1
Why do my breakers trip after the kitchen range shorted?
0
New fuse box installed, tripping!