If I want to add an additional receptacle, which wires do I tap from an existing receptacle?

I have an existing receptacle that used to have both the top and bottom outlet controlled by a switch. I made the entire receptacle permanently hot by disconnecting the switch and connecting all the wires that went into the switch.

I would like to add an additional receptacle by tapping into this existing receptacle. Which wires should I tap to create the new receptacle? Thanks! 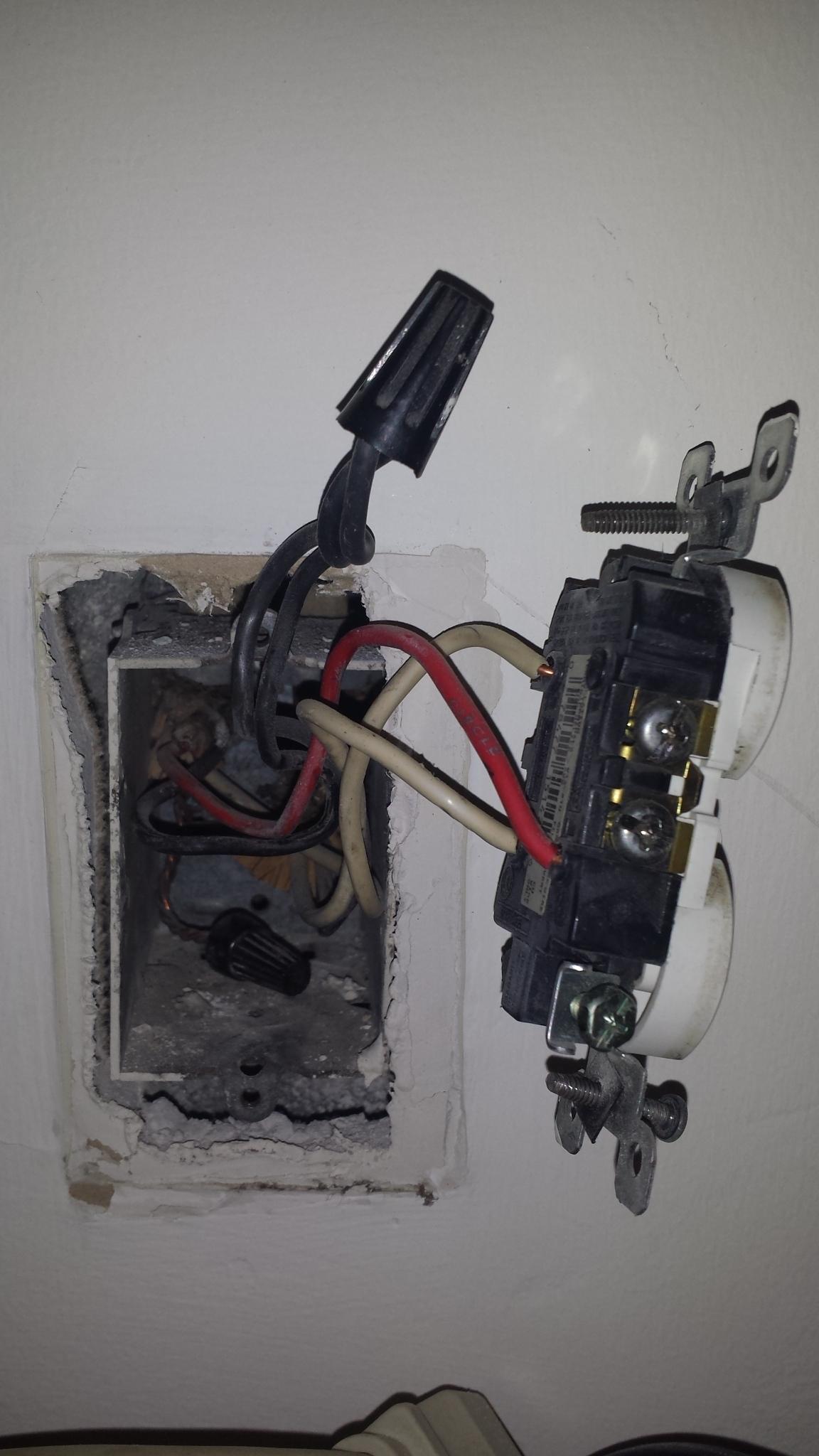 Unfortunately, the box for that receptacle is already full to the brim with wires -- 6 14AWGs is the maximum for a 2.5" deep single gang box such as the one you have here, and with the double allowance that is made for the receptacle, you already have too many wires in it as-is. Going to a deeper box won't quite get you enough space to tap here, either -- a 3.5" deep single gang has room for only 9 14AWGs without a device or 7 with one, and you need 8 14AWG wires (2 existing blacks, 2 existing whites, 1 existing red, 1 EGC allowance, 1 new black, and 1 new white) + a double allowance for the receptacle device.

The other option would be to remove the switch entirely from the the box that housed the switch that used to control this outlet (if you haven't done that already, that is), and then you can run the cable for your new outlet to the former switch location -- that box, sans switch, will have enough room to house the 6 14AWGs (existing black, existing red, existing white, EGCs, new black, and new white) provided it is the same depth as this one, and box replacement is an easier option in this case as you can go up to a 2.5" deep single gang if the existing box is too shallow.

Um, you don't want to use the switch anymore, right? If so, and if when you say you want to add a receptacle, you don't mean where the switch is now (which would look very weird, depending on what room we're talking about...you know, a receptacle almost at eye level!), it seems like you could just remove the switch entirely, put a blank plate over the box, then disconnect and push the wires from the switch out of this box to make room for a new cable. All this assumes you're going to be running a new cable into this box to a new receptacle somewhere else. If that's the case, run your new cable in. Use a wire nut to bond the grounds (bare wires) together and include 2 pigtails. Attach one of these to the box (which should have a green grounding screw in it) and the other to the device's (existing receptacle's) green grounding screw, visible in your picture. Do the same thing with the neutrals (whites) but with only one pigtail, going to one of the lighter-colored screws on the receptacle. Do not bond the neutrals to the box. You can use the device to tie the blacks together. A couple of comments on your pic: as stated, this outlet isn't grounded which is pretty dangerous IMO. Also, if I'm understanding what you did at the switch correctly, that red wire is now your hot wire. If that's so, it's attached to the wrong side of the receptacle (white screws get the neutral side, darker screws get the hot/black side). Seems like a fine point but I've seen cheap electrical equipment that depends on that wiring. It's usually NOT OK to use the device to tie the neutrals together using the device (check your local wiring codes), because if for some reason you have to remove that receptacle, you've now broken the neutral connection to all the outlets "down the line" and if another plugged-in device develops an internal short, it's possible the breaker won't trip and someone could get a nasty shock/electrocuted. HTH

It appears as though you already had hot wires in the box (the two black wires) and didn't need to discontinue the switch.

The red wire is the switched leg from the discontinued switch but the two black wires should be constant hot wires.

Since you discontinued the switch and made the red wire constant hot you could tap off of the red and the white for your new receptacle.

1
14-2 Tap Branched From 12-2 Feed on 20amp Circuit...What To Do?
1
Running a new kitchen light circuit from a receptacle with a "traveller."
2
Adding USB Dual Port Charger Receptacle Blows Mains
2
Adding additional outlet - max wires and box size?
2
Bathroom Wiring - Existing light - Add Bath fan - Add gfci outlet
1
Add a light switch to an existing switched outlet?
2
Can I add an additional outlet using an existing outlet that has no ground wire?
1
Wiring a receptacle from a ceiling box in a basement
1
Installing a wireless remote switch for a ceiling fan in an existing single gang box