Why does my boiler vent steam?

My understanding of a boiler system is that it is closed, meaning the water stays in the pipes and constantly recirculates. However, there is a vent (3" PVC pipe) that is connected to it that periodically blows steam. Where does this steam come from?

You appear to have (based on your other questions) a high efficiency gas boiler which is venting combustion products at relatively low temperature via PVC pipe. 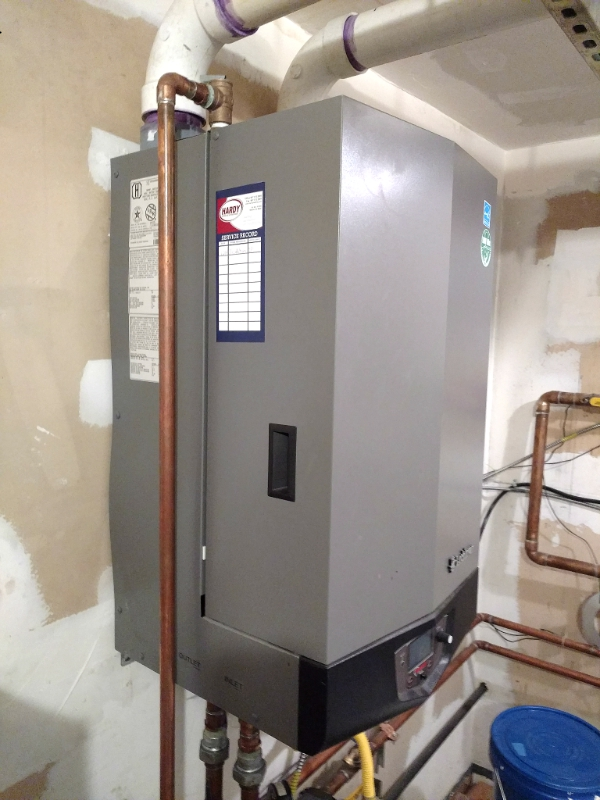 Combustion products are carbon dioxide and water vapor (and carbon monoxide if combustion is incomplete) - thus "steam" (condensate) will be present in the exhaust.

Assuming that your boiler and mine are similar, you have two vents or pipes and the main exhaust.

Main exhaust will emit carbon dioxide and water vapour, the products of combustion. A modern boiler exhausts gas at a lower temperature than earlier ones, having given some heat to the incoming air, so it is possible to see the water vapour condense to form a cloud. The same effect is seen from cars on cold mornings, once the exhaust pipe is hot and the car moving, you see little or no cloud.

There should be a "condensate" pipe, this releases water that has condensed inside the unit, again, this is to give up heat that would just be lost into the air. This is acidic water, and needs to be drained away. My Worcester Bosch boiler lets it out 100ml at a time, because if it is released as a trickle or drip, as early boilers did, the trickle could freeze on cold days, causing the boiler to switch itself off.

Hope this helps and isn't too patronising or inaccurate.

if anyone is still running across this question. the two pipes are intake and exhaust. typically installers will angle the intake downward. the primary byproducts of burning natural gas are Carbon Dioxide and water vapor, not carbon monoxide. if your boiler is utilizing an outdoor reset it will vary the water temperature according to the outdoor temperature to match the BTUs needed by the home for that set of conditions. if you have radiators or baseboards these temperatures will often be above what is considered condensing temperatures. These higher temperatures do not allow for as much heat extraction from the burnt fuel and you will see the vapor more as it gets colder outside and cannot condense to release its energy in the unit.

Yes this is less efficient operation but the temperature needed is based the homes need for total BTUs and how much radiation is in the home. turning down the water temp will lessen the BTUs provided to the space and typically just make your home not heat up in cold weather.

If the concern is when is that dangerous here's a little help on that.

1) every boiler should be getting inspected once a year and your contractor should be detailing concerns for you 2) as the home owner you need to be aware that no technician can predict the future. if the exhaust smell changes to a sooty smell or black soot deposits are seen on the exhaust pipe, your unit just had a failure that you should have professionally checked. With hot water heat this type of failure is almost always coupled with no heat scenario.

Hope this helps someone out there, stay safe and stay warm

Not the answer you're looking for? Browse other questions tagged boiler hot-water exhaust-vent steam or ask your own question.

2
Should I use thread-seal tape for steam pipe?
4
Hissing vent on a steam heating pipe
4
Why are steam radiators used in the USA?
3
Best way to stop boiler steam from entering attic
3
Why would my boiler expel steam when it's set at 180F
4
Can baseboards be used in one pipe steam heating system?
0
How can I tell when my steam boiler needs water?
1
I lowered the pressure on my boiler and it flooded
0
Boiler vent and expansion tank leaks