How should I connect my replacement 3-way switches?

I'm trying to replace upstairs/downstairs lighted Leviton Decora 3-way switches that control one light upstairs with GE Z-Wave On/Off 3-Way Light Switches (from the kit version, 45638). The problem is there's quite a lot of extra wires, and as I'm a new owner to this house I'm still trying to figure out how the previous owners wired everything. Many of the outlets/switches I've replaced have been mickey moused into working, some pretty dangerous.

For ease of explaining: here's a diagram of the up/downstairs wiring as it is currently with the Leviton Decora 3-way switches and then on the bottom what the GE 3-way On/Off Light Switch side-screw configurations look like. All the side-screws have been exaggerated so you can see the colors of the screws. 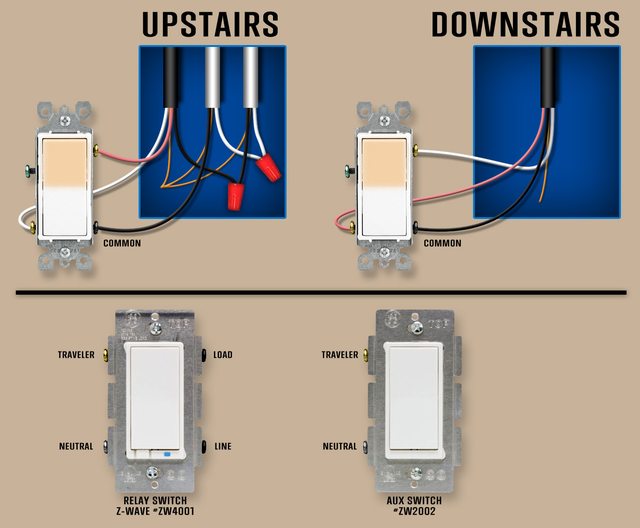 So it comes down to:

First off, the wiring of the existing setup looks totally normal as depicted in the diagram.

It looks like you can use these new switches in the current wiring setup. But first it is necessary to understand the connections of the two right cables shown in the upstairs switch box. One of these goes off to the light fixture and the other is the incoming power cable.

That should do it. You can double check your work, mount the switches to the box and restore power to the circuit.

0
Troubleshooting 3-way switch
0
How should I wire this 2-way light switch?
0
How do I connect my replacement 3-way switches?
0
3 Way Switch Wiring Weirdness
2
How can I get this light fixture to light up?
1
3-way switch replacement mystery: can I solve it without a meter?
1
3-Way Light Switch Replacement Question
0
Three Way Switch Weirdness