My garage has an electrical box with no receptacle in it, just wire-nutted wires. It came this way when I bought the house.

A non-contact voltage tester shows that the black wires are hot. I was about to shut off the breaker and install a receptacle in the box, but then I noticed the black marks around it which almost look like burn marks.

Should I be concerned that these marks tell the story of an electrical problem in the past, perhaps hinting that there's a good reason why there's no receptacle hooked up right now? 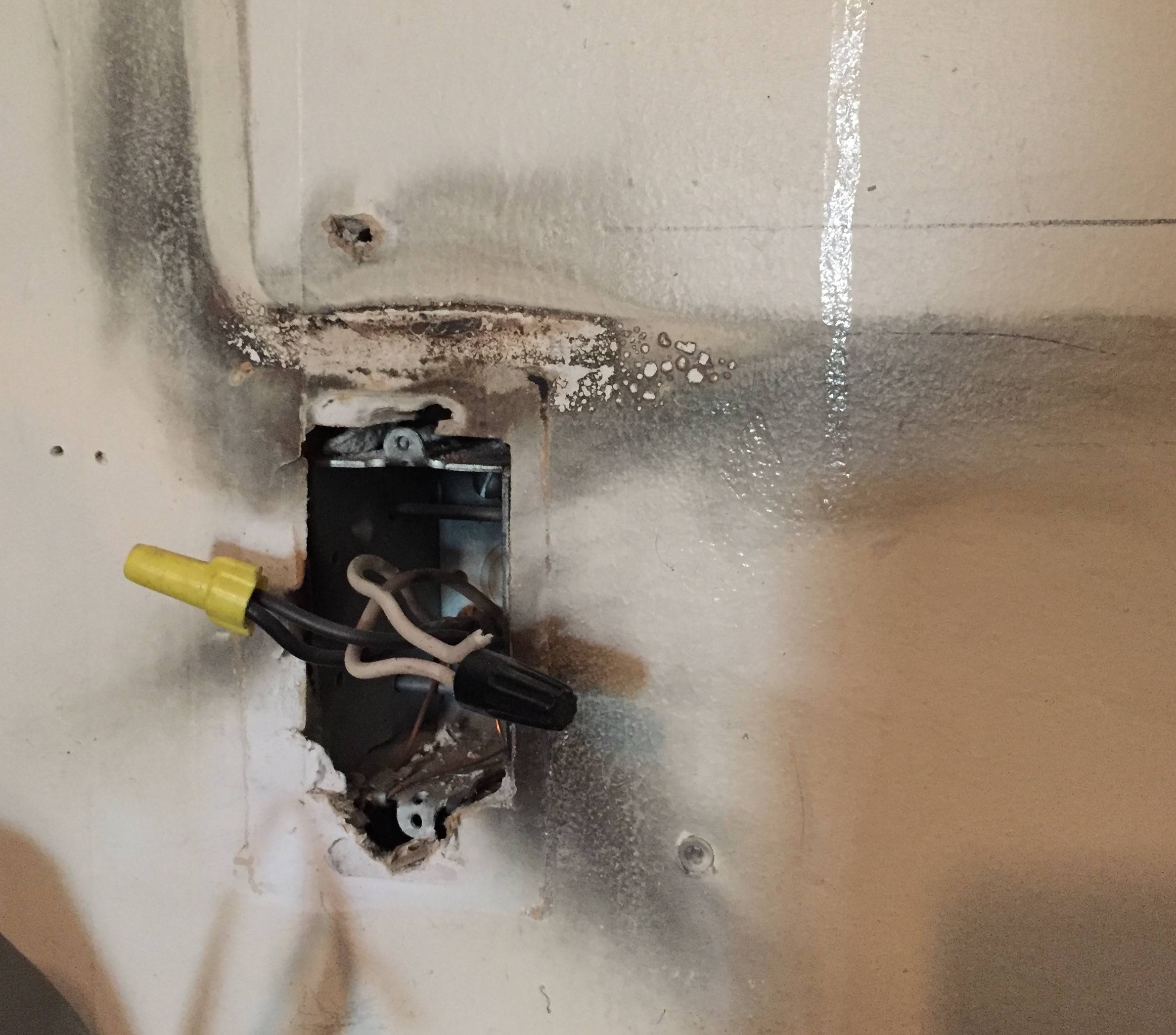 That does look as if it could be soot. The wires themselves don't look damaged (melted, charred).

So there may have been some kind of appliance or device plugged into an outlet there, which failed and caught on fire, which presumably also damaged the receptacle. Or the receptacle itself may have failed and started smoking. In either case, the receptacle was never replaced, possibly just because it wasn't convenient or the previous owner never got around to it, or didn't know how.

There wasn't necessarily an overcurrent condition. But if there was, it could have been due to all kinds of transient conditions.

However, there's also a chance that the overcurrent was due to something like a floating neutral in your panel, which can be really dangerous. As in appliances spontaneously catching on fire or blowing up, and so on.

Do you have any electrical problems anywhere else in the house?

The wires in this box are connected straight through, which indicates that you probably have healthy receptacles further "downstream," in which case there's no reason why this box should be a problem with a new receptacle in it.

For peace of mind, you may want to hire an electrician to check things out all the way back to your service panel, to make sure that all of the connections are tight and you don't have any intermittent failures (like a cracked wire that carries enough current 90% of the time, but then overheats and moves causing voltage fluctuations).

If you disconnect the wirenuts, only one of the black wires should be live, and it should only show current when connected to one of the white (grounded/neutral) wires, and it should also show current when connected to one of the ground wires. Those would be the three wires that lead back "upstream" to your service panel. The other wires carry current on to additional outlets. In both cases (grounded and grounding, or neutral and ground) the current should be a steady 120 volts give or take a few volts, with or without a load on the circuit.

Not the answer you're looking for? Browse other questions tagged electrical receptacle junction-box or ask your own question.

0
Is it possible for the black wire to be hot but to create reverse polarity in a GFCI?
10
False positive from a non-contact voltage tester?
0
Open ground on all outlets, voltage meter beeping on metal boxes and MC cable
0
Replacing GFCI and found two hot wires
1
Wire break diagnosis help
1
(Solved) Electrical receptacle box has only 2 wires (white and black, no ground), but both are hot so no neutral? Can't figure out why?
1
Did I cause problems removing outlet?
1
Wiring a receptacle from a ceiling box in a basement
1
How should I connect a light to box with 4 black wires, 3 white wires?
0
Why would an outlet use a black wire as neutral