Drilling a hole as near as possible to a corner

I want to run a few new wires through my apartment, and for that I need to drill some holes through the walls (10-20mm diameter). Due to aesthetic considerations and cable bent radius I want them ideally to be right in the corner at the ceiling.

Unfortunately my drill has a size and this allows me to get not nearer to the wall than maybe 7cm.

Is there any method/trick for drilling a hole ideally directly in the corner of a ceiling?

A flexible drill bit should do the trick. 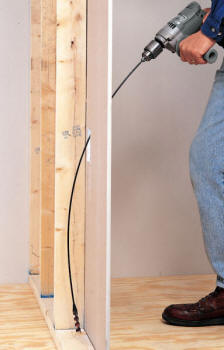 With reference to possibly encountering nails comment from above

Two adjacent rooms with a shared upper corner by the ceiling specifies a T wall layout as shown here:

When you go to drill a hole in the very upper corner of the room you will be drilling through the upper top plate (and possibly into a part of the lower top plate depending upon the thickness of the ceiling drywall and the diameter of the hole being drilled.

I have shown the typical locations where 16d spikes are placed to nail in the two top plate 2x4s. On the first top plate there will be at least two nails into the top of each stud. The second top plate will be nailed near its ends as shown. As a minimum you take the risk of running into the right most two spikes as shown in the center part of the diagram.

Note that drywall is also screwed or nailed along its edges and in the corners. You also run the risk there being a drywall fastener in that upper corner on either side.

We use a bit extensions to get the drill farther away so we can drill with more flexibility. 12" extension is easy to find. Use multiples to get the bit straighter.

4
How to drill and waterproof a hole in cinder block for PVC drain?
2
Mount for a drill with 50 mm collar
0
I drilled a hole in the fireplace flue
0
Can't drill into exterior walls for screw anchors. Why not?
1
Recommendations for drilling a lot of small holes in various plastics (ABS/PVC/Acryl)
1
how to drill aligned holes in steel pipe?
1
Mounting mess up - need advice
0
Repair holes concrete ceiling (not just masking them)
3
Did I harm the integrity of my house trying to run a wire?
15
How to drill through wall without hitting boiler on the other side