Why did they hammer nails in half way and bent them over to secure supports?

In my 1950s house they hammered nails in half way and bent them over to secure the supports to the beam. Why was this technique used? 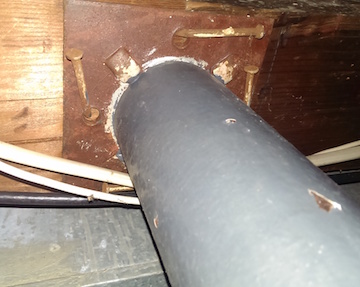 The nail heads aren't big enough for the holes. At that time carpenters didn't enjoy the vast array of fasteners and installation tools that we do today, so they may have used what was available at the moment. It did the job, right?

The carpenter had intended to replace them with lag screws and forgot.

There's something sensitive to puncture behind the surface of that lumber. It looks like a standard beam, but it's hard to say from my house.

Because it is easy to remove the nails if required to move the post.

for the same pulling Force being distributed over a larger nail Surface, this results in a smaller Pressure, thus reducing the chances that the nails break; in fact, there is no need for someone to pull the pipe; its the pipe's own weight that acts as a force towards the nails.

there is also a second factor that keeps the pipe fixed, apart from the nail's contact surface with the supports: how deep the nails went into the wood. Perhaps the ratio 1:1 (half of the nail into the wood, half outside) seemed to be a reasonable compromise. ideally, a large part of the nail should go into the wood, and a large part should remain outside as well. so a compromise has to be made. what would be the perfect ratio is a complicated question, the answer depending on the friction between wood and nail, and the pulling forces that are expected to act on the pipe, and ,further, on the nails.

Not the answer you're looking for? Browse other questions tagged basement construction nails fastener beam or ask your own question.

1
Fix sagging beam situation
3
Hurricane ties installed using joist hanger nails top AND bottom. Should I yank them out?
2
What size beam do I need, and can I build one from lumber and steel?
1
Post to beam connections
1
How should I connect a steel I beam to the sill plate above it?
1
Finishing nails won't penetrate wood
2
Is it safe for my house's main carrying beam to be two separate beams?
1
Proper way to secure a basement post to a metal I-beam
2
Reuse nail holes when replacing oak trim