How do I wire mutilple sections of lights with 3 way switches to same power source?

I want to wire four separate sections of lights for my basement from the same breaker. Three sections will be wired to 3 way switches, and one is a single pole. The previous set up was wired from the panel, to the lights and then to a 3 way switch. Maintaining this set up, I have wired Section 1 successfully (14/2 to the lights, 14/3 between lights, 14/2 to switchA and 14/3 to switch B. For the second 3 way switch section, I have 14/3 running ( but not yet connected ) between the 2 switches, and 14/2 from the second switch to the light fixtures and between fixtures. The 3rd 3 way section was already wired and has a 3 way wire coming into the switch box from a switch at the top of the stairs, and a 14/2 going out to the light fixture. I have not yet wired the single pole section. How do I connect the other two 3 way switches and the single pole to the power source? 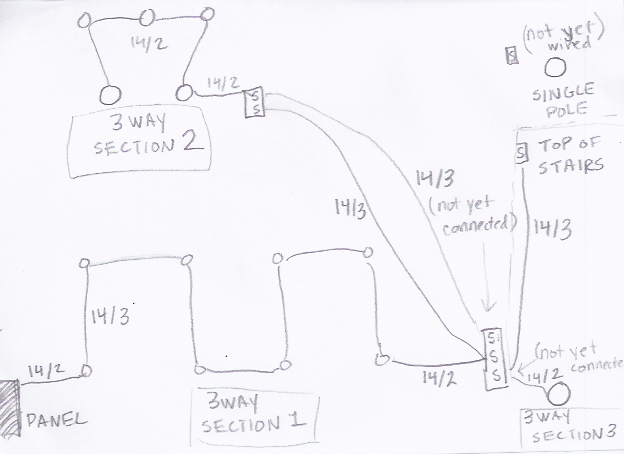 Your problem is that the run from the 3 switch box to the top of the stairs doesn't have enough conductors. In addition to the hot and two switched you now have, you will need a neutral return for the new single pole section.

You could use conduit here, but there's no sense ripping out the 14/3 that's already installed. Just run a 14/2 parallel to it as shown.

I'm guessing about which switches must control which lights, but here is a suggested wiring diagram: 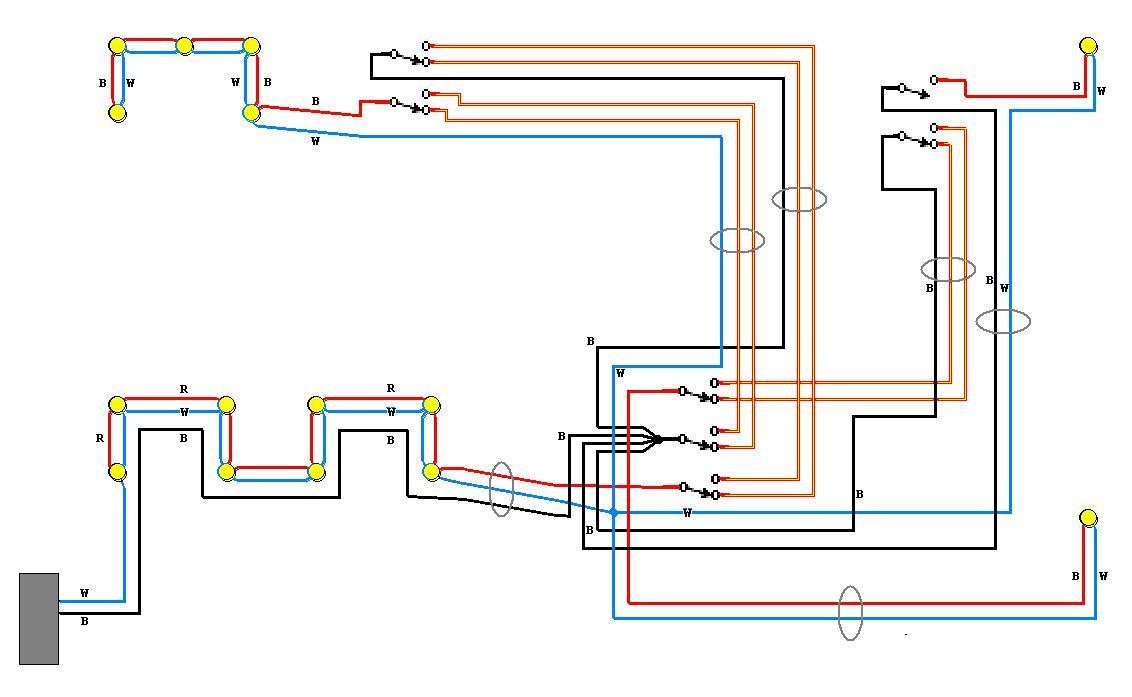 B = black, W = white, R = red, where indicated. Wires not marked in the diagram are all switched, so use whatever conductors are available, and please mark the ends of them with a bit of yellow tape for future maintainers. And don't forget to hook up the equipment grounding conductors!

I have omitted the details of the lights wiring as you have already done these.

Pay special attention to the connections in section 1 as the neutral wire here is carrying the load for the entire basement.

Late Edit: I just noticed that in an earlier diagram I recommended what is a code violation in most places. Justin W. has long since finished or abandoned this project, but I don't want to mislead anyone else who might read this later.

I have modified the diagram to show which conductors should be parts of a cable, in order to satisfy modern code, balance the current flow in each cable, and avoid inductive heating, magnetic radiation, and excessive line losses.