I've just installed a chandelier at the bottom of a staircase. I do not like the current orientation of the chandelier. I would like the side nearest one wall to be parallel to that wall, but it currently is not. So, I need to rotate the chandelier. Here's the problem... The chandelier is mounted to a retrofit Westinghouse fan safe-t-brace. That brace is necessarily perpendicular to the joists, and the junction box can be installed on the brace in one orientation only (actually two orientations, but they are equivalent by symmetry). The chandelier bracket mounts to the junction box in only one way, likewise, the chandelier mounts to that bracket by two screws in a fixed position. Rather long winded way of saying, there is no way to rotate the fixture at its mount point.

So, I need to either fashion a new mounting bracket with slots that allow for rotation, or somehow adjust the orientation by twisting up the chain and fixing it somehow.... But I doubt that would be accurate. Any gizmo or technique I can use here? Thanks! 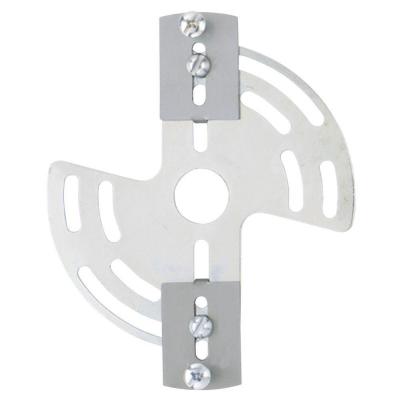 These come in various configurations. 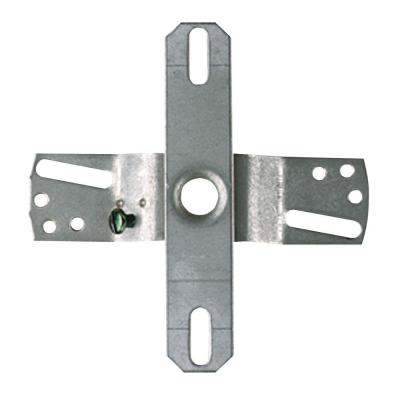 You can usually thread bolts downward and hold them in place with nuts. These will be used to hold the chandelier. Then mount the plate to the box, rotate to adjust the angle you want. Then mount the fixture to the plate.

This works with fixtures up to a moderate weight. It should not be used with very heavy fixtures and definitely not with a fan.

0
How to wire 2nd light to existing circuit with light and two 3-way switches?
0
Weird 3 Way Chandelier Stopped Working
0
Installing 3 Eve Light Switches - one works, but two others just flash the lights every 6 seconds
1
LED light is on when it should not be
1
Fixing a (possibility) incorrectly wired 4 way light
2
Can you extend electrical wires from a junction box as long as the splices are contained?
2
Install Fluorescent Tube Light, Correct way to Rotate?