How do you ground residential network equipment?

I needed to run some Cat5e UTP network cables and decided to add network outlets to most rooms, run new phone wiring and RG6 as well.

Much of what I've seen and read about residential and small office installations doesn't mention grounding much but I know that in the data center It's an important consideration. I called a local antenna installer (the only one I could find) to have them move an attic antenna to the roof and they said they don't recommend grounding the antenna. I'm a bit confused by both the lack of information and conflicting information. The bits I've seen on the TIA residential spec didn't mention grounding.

All the cables will be terninated on a plywood panel in the basement with 2 small wall mount racks. One for patch panels (coax and cat5e) another to hold a network switch. Cabling is cat5e UTP for data and phone. Coax is RG6 with 2 seperate runs, one for commercial tv provider, other for an attic mounted antenna that I'd like to eventually move to the roof.

Is there a requirement (USA NEC) to bond these racks, and the equipment in the racks?

If it's not a requirement are there good reasons to bond this equipment?

How would you recommend grounding bonding this setup? The current drops from providers are properly grounded.

In larger data centers I've seen those big copper grounding bus bars which seems like overkill. In smaller installations I've seen small aluminum(?) grounding bars that look like the ones in electrical panels. From there ground wires connect between the block/bar to the racks and then the racks are connected to patch panels and other equipment with ground wire and grounding lugs.

Where can the other end of the grounding conductor go? People have different opinions of what the code states. Some have said a separate ground rod, other's have tied it to all sorts of things including steel building structure, water pipes, electrical conduit....

This is what's available to me where I'm mounting my equipment.

A) Lots of copper cold water pipe on the house side of the water meter. Main line is underground copper that runs at least 10' in ground. This would be the easiest/cheapest. I know in the past the cold water line (house side) was at least once used to ground the incoming phone service.

B) Some armored cable (old 2 conductor where armor is grounded)

D) Main electrical panel. The wire run would be greater than 20' though.

The above is just to illustrate what I "know" (think?) and what I have available.

This is a bigger can of worms than meets the eye. There are huge arguments over all this.

This is a coax grounding block: 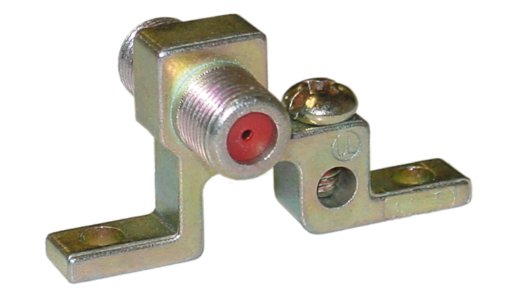 This is a grounding bar: 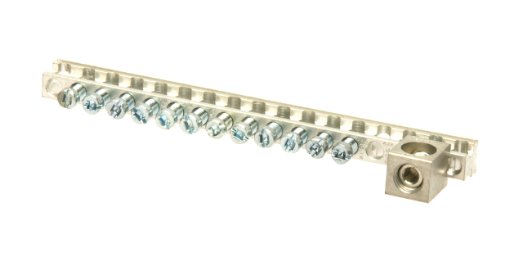 This is a grounding bridge, your cable company or telephone company probably has one on the outside of the house at the electrical service entrance: 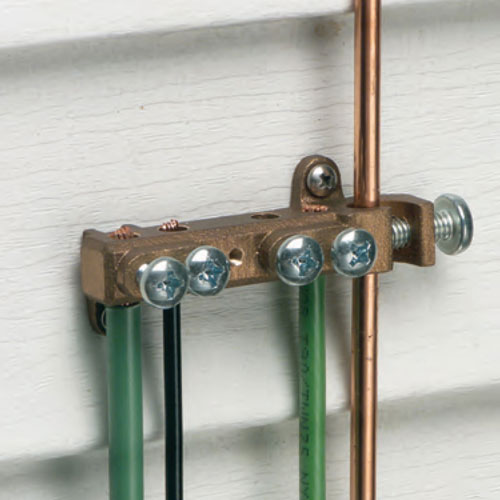 There is a good chance your patch panel doesn't ground the coax that goes through the house. However if you use surge strips that have a coax port in those places, and the coax has been terminated properly so the body of the plugs are bonded well to the shiled, and the outlets those surge strips plug into have a good ground, you should be fine.

One last thing - this whole thing hinges on good grounding of your electrical system. If you want to be really careful there, have an electrician check the grounding and bonding and if possible ground resistance. This is IMO worth doing in general.

You don't need to ground UTP wiring... in fact there is nothing to ground on it. (If you were using shielded twisted pair wiring, STP, that's a different story).

Any network equipment like switches that needs to be grounded will have a 3rd pin on the power plug and ground itself. That will probably also ground the metal switch rack if the switch chassis is metal, but again the network cabling does not have a ground so it's not really important.

Unless you are having a problem I wouldn't worry about it. In a residential setting it's extremely unlikely you will ever saturate the bandwidth of CAT 5e. If you want to give yourself a little bit of extra headroom you could use CAT6 for a few dollars more but it's probably not worth it.

As for code requirements, I don't believe the NEC covers any low-voltage stuff. If your equipment has special requirements you could follow those but again a standard ethernet switch is just going to ground the chassis through its power cord.

EDIT: my answer is exclusively about twisted pair (CAT5/6) cabling and the associated network hardware. I maintain that any sort of grounding beyond using standard 3-prong plugs where applicable is unnecessary in a residential setting. Coax cable is a whole different story, since unlike UTP cable it does have a shield around it. Grounding at the service entrance should be provided by the utility.

I'm not going to focus on whether or not you should do this, instead I'll focus on how it's supposed to be done.

The telecommunications systems should be grounded where they enter the building, which will likely be handled by the utility. The utility will use the intersystem bonding termination; or other means, to bond the utility lines to the electrical systems grounding electrode system.

If this is not done. You can do it yourself, or ask the utility to do it for you.

Telecommunication Systems Within the Building

If you're looking to ground telecommunication systems within your home, you'll want to aim for something similar to this. 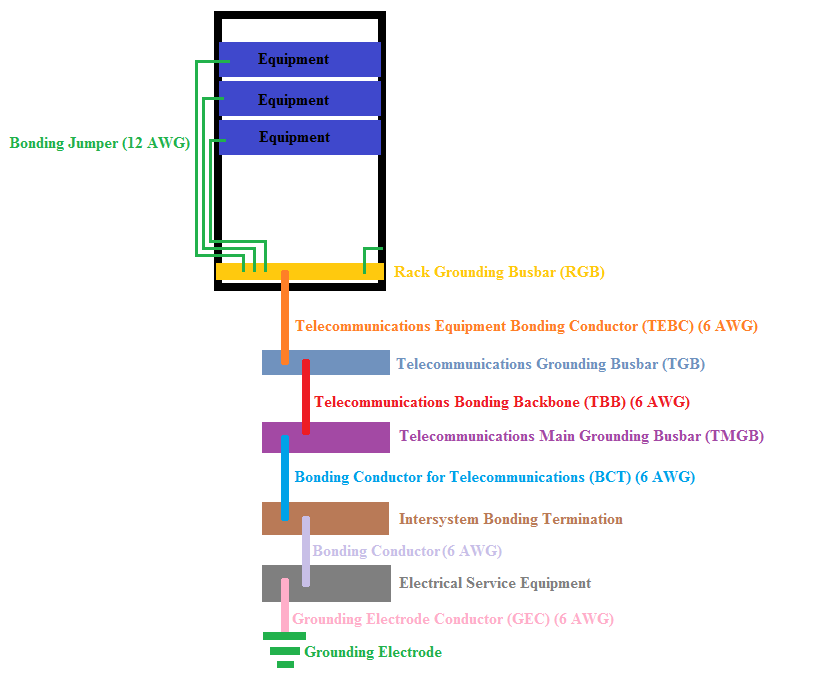 Since you're in a residential application, you're probably only going to have one or two racks. Because of this, the system will likely be a bit less complex. Your system will probably look closer to this. 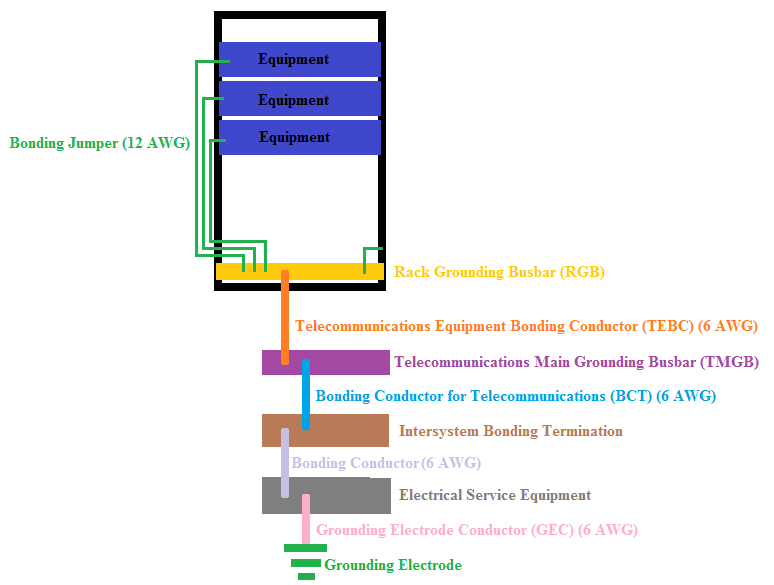 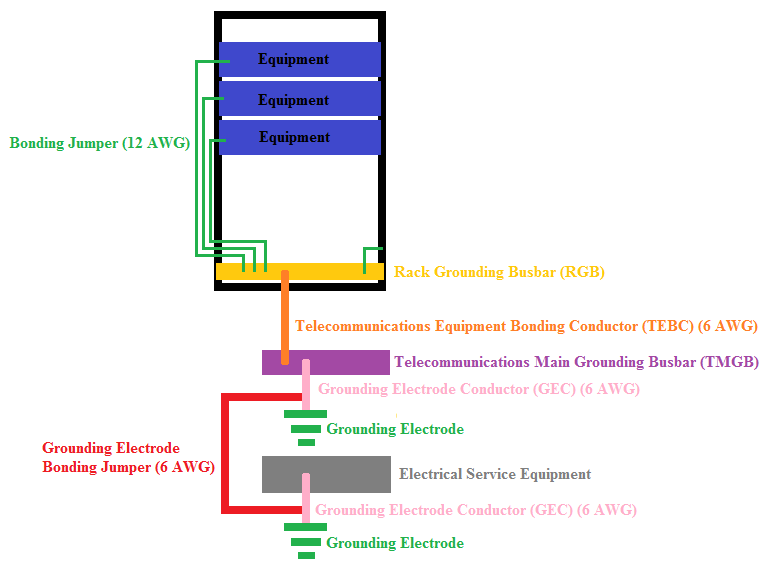 Before you ground large metal structures on your roof to Earth, consider not just code, but consider why lightning happens. Electrical potential develops between the sky and the ground, and it will find the easiest path it can to discharge, even if that means breaking down hundreds of feet of air into plasma!

If you are putting a large surface area on your roof, particularly with pointy edges, and bonding that to the Earth, you are asking to get hit.

If you really really want to ground something like that on your roof, this is about the only case I could think it might be smart to use a separate ground rod, and put that conductor in a schedule 80 conduit so when it explodes its less likely to damage your home, and easier to replace.

Not the answer you're looking for? Browse other questions tagged electrical grounding cabling grounding-and-bonding or ask your own question.