What is the difference between an interlock and a transfer switch?

With respect to wiring a standby generator, what is the essential difference between an interlock and a transfer switch and what are the pros and cons of using one rather than the other?

An interlock needs a human to operate it. They cost less, in general.

A transfer switch can be (and usually is) automatic. They cost more, in general.

An interlock setup can usually feed power to any circuit in the panel (but if you overload the generator input the generator breaker will trip.) This is also controlled manually, by the user turning other breakers off and on.

A transfer switch setup can only feed specific circuits, since automatic operation means there's nobody to turn off circuits to shed load, so the loads connected to the generator must be less than or equal to what the generator can supply, if all are operating. 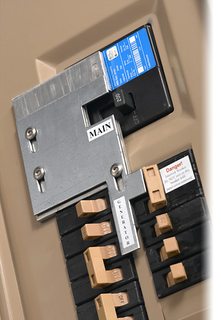 To operate this device, a user would have to:

It may also require the user to turn off some of the breakers in the panel, if the generator is not capable of supplying the entire load. Therefore, interlocks may require additional knowledge and understanding to operate.

Interlock kits tend to be cheap, in comparison to transfer switches.

A transfer switch (or sometimes transfer panel), is a device (or group of devices) that allows you to switch between two or more power sources. It can be an automatic, or manual device. It's similar to a single pole double throw switch, and allows you to select which power source is used.

A two source transfer switch will have three positions:

Transfer switches tend to be more expensive than interlocks, especially automatic transfers. Though they may make up for the additional costs, in convenience, ease of use, and safety.

Not the answer you're looking for? Browse other questions tagged generator emergency-preparedness or ask your own question.

5
How can I check my generator to see if its ok?