Will an LED light bulb illuminate down on this uplight lamp?

I have this Ikea Floor Uplight lamp and I want to replace the current CFL light bulb with an LED light bulb. I'm thinking of using a Philips 433235 60 Watt Equivalent SlimStyle A19 LED Light Bulb (Daylight, Dimmable).

I use this lamp next to a desk which is about 3 ft to the left and 3 ft below the light bulb. Will the lamp still illuminate the desk as well as (or better than) the 60 Watt Equivalent CFL light bulb?

Here's a photo of the bulb in question: 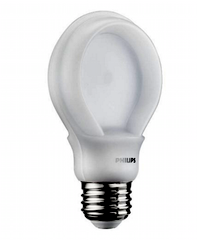 I have that same bulb and when used in a shade that hides the bulb itself, it does radiate similarly to an incandescent. The bulb has an array of small LED's around the edge that light up the thicker ridge of plastic, it essentially looks like a bright tube of evenly lit light, so the light radiates in all directions. However, the thinner plastic in the middle isn't lit. Since the entire ring is lit starting from the bottom of the bulb and the ring is wider than the base, some light is radiated downwards, but like a traditional bulb, more of the light ends up going upwards since the base blocks some of the downward lighting pattern.

This unusual shape can be visible in a lamp with a translucent shade or in a fixture where the bulb is exposed. In a lamp with a traditional paper (or paper-like) shade that is nearly opaque, this type of bulb has a very even light distribution.

Here's the light at a low dim level, showing the LED's around the ring: 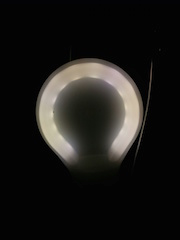 But when the light is at full power, they all blend together and project light evenly, lighting up the entire "tube".

I tried these bulbs in a bathroom fixture, but discovered that the translucent shade on the fixture was transparent enough that the bulb shape was quite visible, so I replaced them with more traditional looking LED bulbs.

Since the floor lamp you're using has the bulb above eye level, as long as the shade is sufficiently frosted to prevent the bulb shape from showing through, it should work well.

Not the answer you're looking for? Browse other questions tagged lighting led lamp cfl or ask your own question.

9
What is the difference between dimmable and non-dimmable CFL bulbs?
3
Is there such a thing as an actual 60W draw LED or CFL bulb?
16
Why won't a LED bulb work in a standard light fixture?
3
Why is CFL bulb life terrible in a three-stage off/low/high lamp?
0
Power supply and dimmer/pot specs needed for LED A19 bulb in DIY desk lamp
4
LED light bulb flickering in socket, incandescent works fine
0
Why do some LED lights go dim while others go out completely?
0
7w LED bulb in a 5W led fitting
0
Some dimmable LED bulbs don't dim all the way in ceiling fan