Sorting out the 3-gang box for smart switches

first time question here so grateful for any help.

I am trying to install some "smart" switches (GE Quirky). Switches which live by themselves in the box are really easy (just follow the instructions - link line to line, load to load, ground to ground and neutral to neutral). However, my first 3-gang box stumped me a little today - after carefully mapping it out I think I have it figured, but was thinking I may as well run it by you guys and see if I am missing anything - particularly considering that there are few wires in there that seem superfluous.

Basic background: The box is at the entrance to the condo on side of the kitchen. It contains three switches (I am labeling them A, B and C here for convenience).

Switch A is a part of the 3-way, controlling the corridor light. I am not replacing this one at the moment.

Switches B and C control different sets of kitchen lights. They are supposed to be single pole. It is these two that I want to replace with the Quirkies.

Few years ago kitchen was renoed (by professionals) which may explain slightly weird wire structure in the box - compared with something that would have come with the building at least.

There are four holes in the box for the wires to enter and exit. Three are symmetric and positioned roughly above the switches, fourth is smaller and offset a bit. I am labeling the holes 1,2,3 and 4.

I have provided the diagram that I drew of all the wires in the box. (Sorry for non standard labeling - I am very much an amateur at this). I will also describe the setup in detail here. All labels are mine (and they are linked to what I think wires are. Colors of the wires though are real information).

Aside from the switches, central element in the box is a large red(ish) wire-nut (represented by the pink circle in the diagram). There are five wires coming in/out of this main nut:

Each switch has two live wires leading from/into it - one to the central nut and other to the pipes. Nut-switch wires are mentioned above; others are:

In addition there is a white neutral wire N1 going from the switch A to pipe 1.

Finally, there is a number of wires that are connected neither to the switches nor to the central nut:

My theory is that the L1 and(/or?) L2 are the line wires for the circuit - or alternatively that one of them is a line wire and the other a load wire to something in the kitchen.
L-A, L-B and L-C are the line wires going to their respective switches and O-A, O-B and O-C are the load wires for the switches.
N1 is a "control" third wire for the three-way switch that switch A is the part of.
Ex1 and Ex2 are a switchless connection for some appliance in the kitchen (likely hood, as it is on the same breaker as the rest of this circuit) that was set up during the kitchen reno.

Things that I am still unclear on are:

Why are there two "main" line wires going into the central nut ?
Why is there four neutrals tied together and one hanging out by itself ?
What is the point of Ex3 ?
It appears that the semi-usual convention of black=line, colour=load is not quite followed here. L1, L2, Ex1, Ex2, L-A and O-A all seem to be at least compatible with it, but L-B, O-B and L-C, O-C seem to be backwards.

My plan - unless someone suggests the alternative is the following:

Each Quirky comes with four wire connectors (black for line, red for load, green for ground and white neutral).

For my first Quirky, I would disconnect switch B, connect L-B to Quirky line connector and O-B to Quirky load connector. I would then link Quirky's ground to all other ground wires and its Neutral to the 4 Neutrals that are capped together.

For the second one procedure would be essentially the same, connecting L-C to the Quirky line connector and O-C to the load one - again connecting ground connector to all the grounds and the neutral to the main collection of neutrals.

However, once again, I am very new at this and would appreciate any advice you veterans could give me before I actually go ahead and rewire this stuff.

Many thanks in advance, Bojan 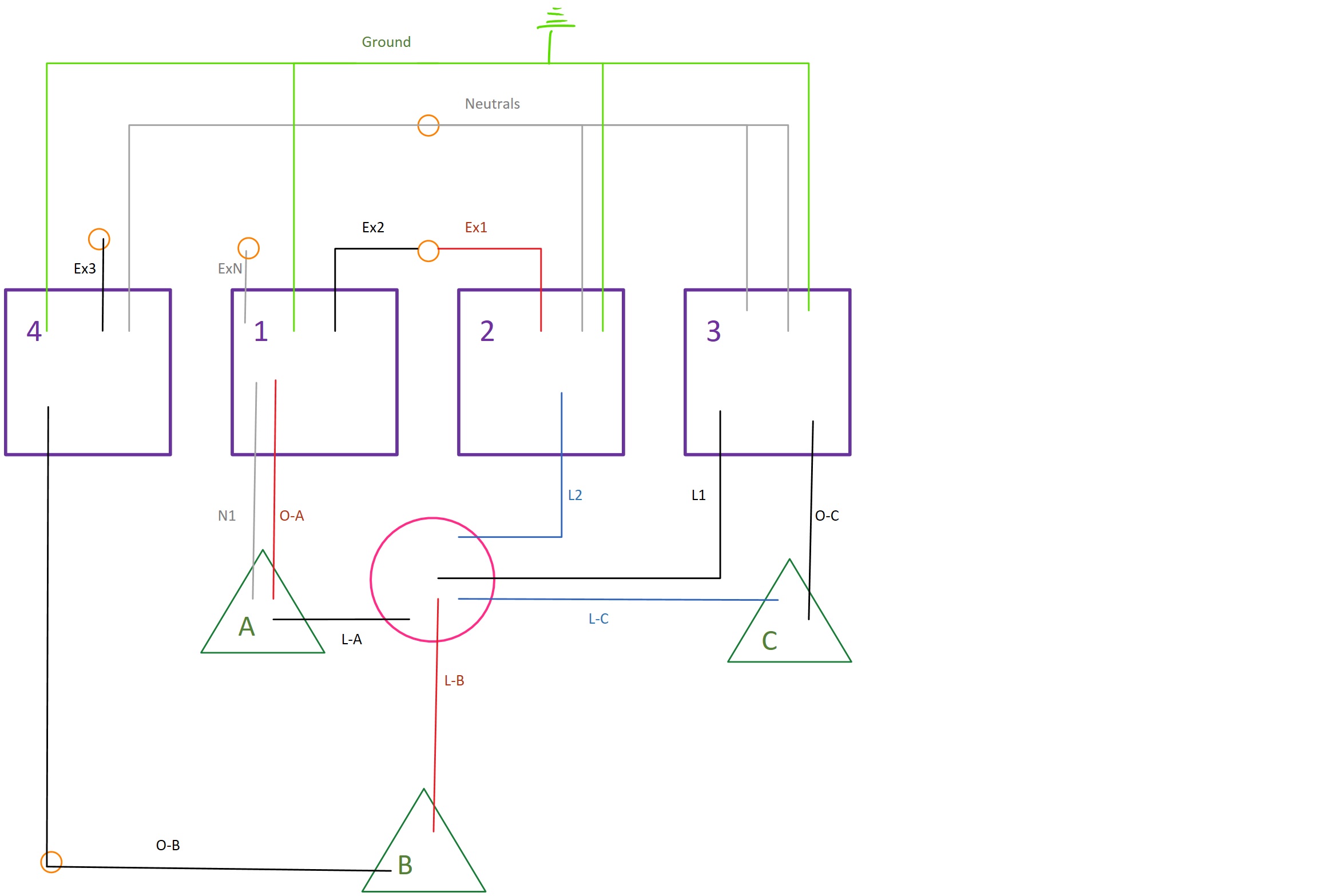 Your plan sounds about right, but you'll likely run into trouble fitting all the wires in the connectors. Wire connectors have a limit to the number of wires they can connect, so you'll have to be aware of this limit and work within it. This may mean having pigtails between a couple bundles, or using larger connectors. Check the manufacturer's documentation, to determine the proper wire connector to use.