How to prevent half wall (drywall, steel studs) from wobbling

I want to make a half wall beside a staircase (on the edge of the upper floor). One end will be attached to a concrete column, but the other will be (so far) unsuported. Something like the picture below: 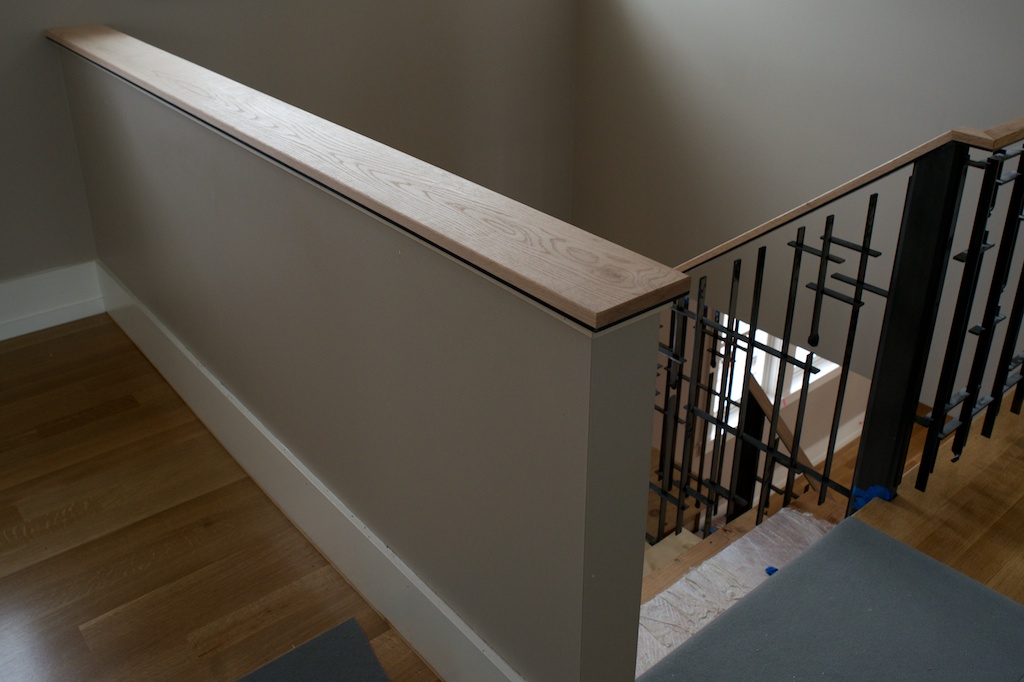 What is the best way to ensure that It stays put and strong? If nothing else I will make a square tubing post (100x100mm, 1.5mm thick) from floor to ceiling and attach the drywall to it.

EDIT: No wood studs in Brazil, actually it is very hard to get good construction lumber around (most aren't dry, and pressure treated is rare and expensive as hell).

Residential steel studs aren't rigid on their own. They get rigidity from the surfaces they are connected to along with the drywall that is attached.

For a wall like that, I'd want to treat it like a newel post on the end and have it be a 4x4 blocked and bolted to the joist below it for rigidity.

Otherwise, your idea to just make it a full column would work too.

I agree with the other suggestions to use wood for this case.

However, if you're dead set on using metal studs, look up "box beams". Box beams are very sturdy even with residential grade steel studs and you make them by using two pieces of steel stud (with the hollow portions of the framing members facing inward toward each other) and then two pieces of track (one on the top and another piece of track on the bottom). That said, I'm not sure if they're to code for this application.

Here is a rough drawing as viewed from looking at one end of the beam:

Another design to throw in, though I don't think they would be sturdy enough for a half wall are I-beams made using steel studs: I-beams look like a traditional I-beam and are made by screwing two studs back to back. It adds significant rigidity, though not as much as a box beam. Though the I-beams nearly doubled the cost of framing the stud walls my basement, I liked having the added rigidity for hanging things:

I'd go with wood studs for a wall like that, and use a doubled up stud at the end. Use good sized lag bolts to attach the sole plate through the subfloor, and into the joist below.

If the wall is too long, you could add blocking and/or cross bracing to add rigidity. The wallboard will also add a surprising amount of rigidity.

Not the answer you're looking for? Browse other questions tagged drywall studs or ask your own question.

0
How can I attach to drywall with aluminum studs?
0
How to frame steel studs parallel to concrete ceiling “joists”
8
What is the concept behind drywall studs?
1
Ceramic tiles on drywall on steel studs, any problems?
2
Drywall extended out from studs?
0
Does this wall have any more studs?
1
Drywall repair with cut wall studs
2
How does one find studs in double drywall