I'm leasing a commercial space and I have concerns about the breakers and electrical space. All the lights in the space are switched by the breakers, so the breaker box gets visited at least twice a day. The breaker box is located indoors. To my knowledge, the breakers are not overloaded (e.g. 10A on a 20A breaker). I have heard crackling noises from the breaker box, and have called the landlord to have it fixed. (The landlord is responsible for everything but the light bulbs).

I will admit that the sound is faint, and I can practically only notice it with my ear 3-4 inches away from the breaker box, and I can't localize the sound to a specific breaker. I've noticed some intermittent minor flickering on the lights as well that let me identify the crackling breaker. I would like it to be fixed, but I'm concerned that I don't have enough sufficient evidence to convince people there is a problem.

I suppose this means that I have two questions:

Should I be worrying about these symptoms? (am I being paranoid?)

What evidence could I look for that is more obvious or conclusive than the subtle indicators that I have observed?

EDIT: Image of the breaker after repair. The replaced breaker was originally in the top-right slot. After it was replaced, it was then moved to the third from the bottom slot (marked "240V. Test"). 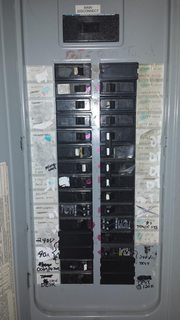 Images of the replaced breaker. In normal light, the contacts are heavily oxidized (black). There were spark marks on the case in-line with the contacts, but they were wiped off. 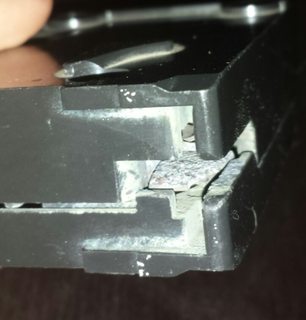 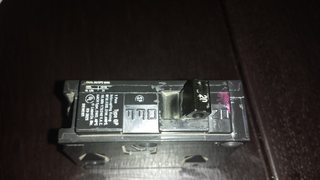 If you've had some trouble, you're certainly not being paranoid.

I am curious why the service person didn't move the circuit to a fresh breaker in a fresh spot in the panel, I wonder if the contact surfaces from the bad breaker are messed up, they may need attention. I also feel it's best to take questionable equipment completely out of service, I wouldn't have put it in a fresh spot in the panel. It's possible this problem may be beyond the service person's electrical expertise, some maintenance people are fully qualified licensed electricians, some know just enough to be dangerous (literally).

I never like to switch lights at the panel. Like everything else, breaker quality isn't what it used to be. There's usually a better way to do things without breaking the bank.

Anyway, I bet you already thought of all of the above. I'd suggest you have the panel inspected by a qualified commercial electrician who will have the knowledge and equipment to conclusively test the breaker. If they find no trouble then you spent a few bucks to rest easy, if they find trouble it would be reasonable to ask the landlord to reimburse you for the cost of the testing.

Not the answer you're looking for? Browse other questions tagged circuit-breaker breaker-box or ask your own question.

12
Does turning circuit breakers off cause wear?

8
Can I install an additional breaker bus bar on my main breaker panel?
3
How do I troubleshoot a newly installed non-working outlet?
5
What are my options to repair a broken tab on a bus bar?
4
Using a 30-amp tandem circuit breaker for a 120/240v circuit?
0
Dead circuits with breakers across from each other
1
Circuit breaker panel voltage drops when a load is added
0
Circuit breaker problems
1
Why do some spaces in my electrical panel not provide any power?
0
Do I need to add a circuit breaker to the outdoor panel that powers my RV?
1
Help identify this breaker panel config