how to hardwire an exterior rope light properly?

Update: As suggested in answer by Ecnerwal, I am changing the question a little bit. Instead of asking what type of rope light this is, I am now asking what would be the proper way to bring this "up to snuff"? I would like an exterior LED rope light here, controlled by an indoor light switch.

This rope light is outside and is hardwired to a switch that is inside. It appears to have two wires inside it, but the connection that you see is the only info I have to go from.

I want to purchase an LED rope light and attach it, but the various ones I have tried (bought from Home Depot) did not fit this connection. Would the best approach be simply to snip this connection off and then attach whichever rope I buy to the wire? My concern is making sure to have a weatherproof connection. I also don't have a lot of extra wire to play with. 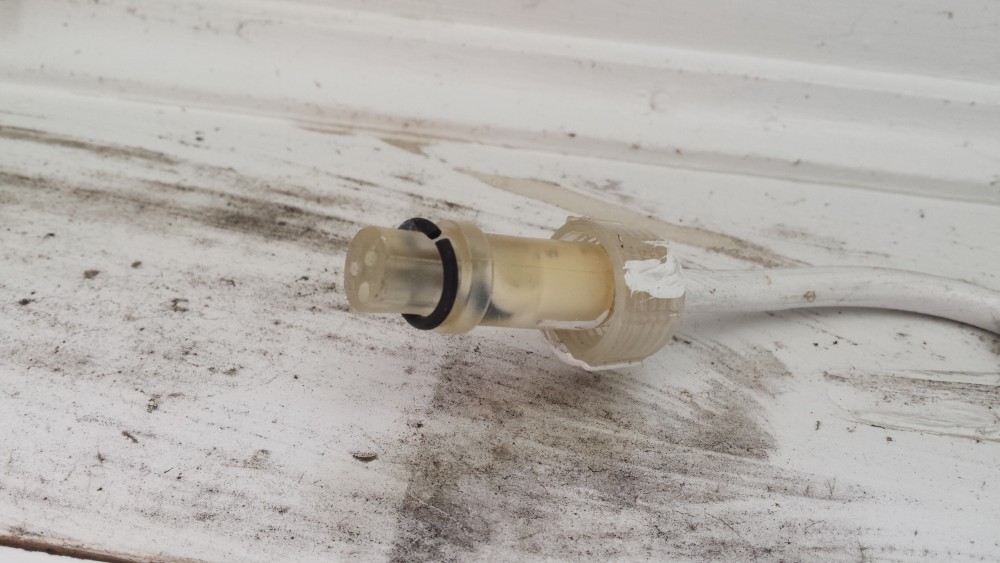 The distance between the two black dots in the photo below is ~3/16". The diameter (measured in the direction through the black dots) is ~7/16". The measurement perpendicular to that (vertical in the bottom photo) is 3/8" - this is a little less because the end of the plug isn't perfectly round but rather has a flat edge on the bottom. It's a little hard to see in this photo unless you look closely. 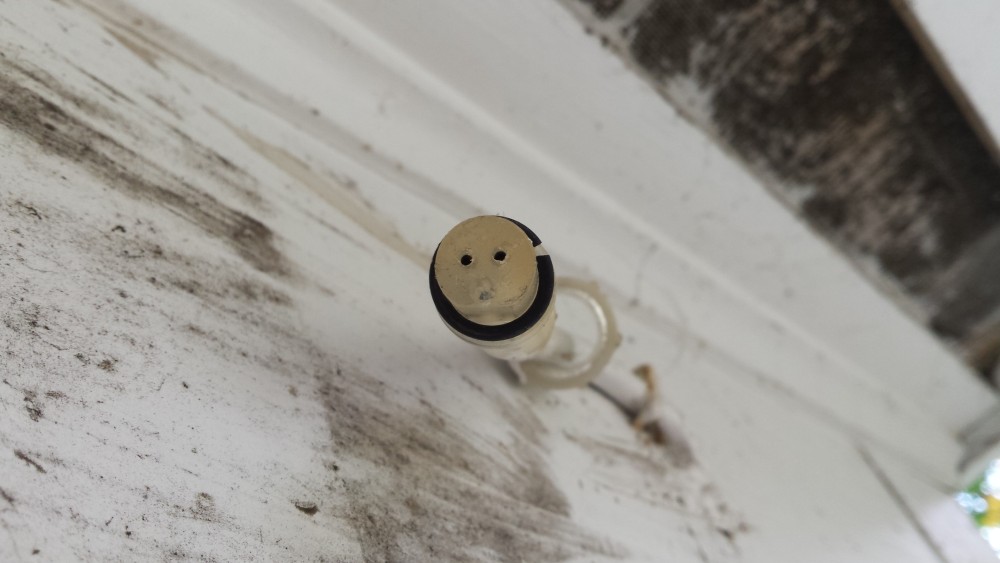 Well, this installation certainly does not appear to be in any way NEC compliant - it would appear that the power cord for the current rope lighting was simply run into the wall (where it is not listed to be) and caulked (and if hardwired, had its plug snipped off, and likely has stranded wire connected to terminals only listed for solid wire.)

The connector is no doubt proprietary to the maker of the rope lights and probably also to the era of the particular rope lights, rather than being anything standard.

I would suggest replacing the entirety of this travesty with something a bit more up to snuff.

Based on a quick look at a few LED rope light products, all of which seem to be of the "plug in" type, I would suggest replacing the "cord out the wall" with a properly wired outside outlet, GFCI or on a GFCI-protected circuit, in an outside box, with "in-use cover" to accommodate a plug in connection. If you find an LED-rope light (or power connector for same) that is actually designed for hardwire connections, you could skip the outlet and just have a junction box for the connection, but the circuit should still be GFCI protected. Since you want this controlled by a switch, make it a switched outlet that connects to the switch in question.

If that's more than you feel comfortable doing, hire an electrician - it should be a fairly small, straightforward job.

Not the answer you're looking for? Browse other questions tagged electrical lighting led cabling or ask your own question.

4
How to turn off a light sensor LED light?
1
How do I wire a light controlled by two switches?
3
Hardwire or plug in for LED strip lighting?
1
Connecting UF wiring for under deck lighting to an existing NM exterior light switch
2
How do I install this motion-sensing light switch?
1
Convert plug-in light to hardwire (not hardwire to plug-in)
1
What is this light? How can I replace / fix it?
0
How do I prevent an LED rope light from glowing dim when switched off?
2
Retrofit LED can light
0
Connecting an exterior string of patio lights to an existing permanent exterior CFL fixture