Does building insulation wear out and have to be replaced?

First, a little back-story. I've been having trouble with the air-conditioning system in my south-Texas apartment home for almost two months so far this summer. The apartment manager has been sending their "A/C Certified" (the certification a whole separate thing to be skeptical about) technicians to my apartment. On each occasion that a technician comes to my home, he wants to just glance at it and tell me there's nothing wrong in spite of my explanation. I nearly have to poke him with a stick to get him to give it more than a cursory examination even after I explain that the indoor temperature tops 80 degree Fahrenheit every day.

However, one of the technicians observed that there was an area above the living room where the insulation above the ceiling is missing (I confirmed this observation), and so the apartment manager called for an outside contractor to come service it.

He came to my apartment and told me that not only was a section of insulation missing, but that all the insulation above my apartment was old and needed to be replaced. I am very skeptical of this claim because I've never heard of such a thing, and also I never had any trouble with the temperature in the winter time. The apartment manager has not had time to act upon his recommendation AFAIK, but it sounds to me like we're being taken for a ride.

I've never heard of such a thing as building insulation needing to be replaced when it reaches a certain age. Personally, I've nearly given up hope on the situation and have begun making plans to move my family to a new home.

Therefore, my question: is building insulation a thing that wears out and must be replaced eventually in order for my apartment home to stay cool in the summertime?

Insulation will degrade over time. However, we're talking about decades, not months or even a few years. Even blown fiber or cellulose insulation should provide a good R-value for as long as the house is structurally sound; if you need to vacuum out and re-blow or re-lay insulation, chances are the house needs a LOT more work than that.

What is probably happening is exactly what BMitch said; keeping a place warm in the winter is easier than keeping it cool in summer. All the external heat sources such as solar gain that help you out in winter work against you in summer. Heat is also easy to come by; everything in your house that consumes electricity, natural gas, or food produces heat, by the second law of thermodynamics (no system in the universe can operate at 100% efficiency). Taking heat out of air is harder, because those same laws are now working counter to your goal, adding heat back in even to the system that is providing the cooling.

I'm from Texas, so I know a few things about heat. Here are some tips:

Old insulation may be of lower quality (less of an R value than what would typically be installed in a space). It could also become moldy in environments with high moisture. And if it's a loose fill (e.g. blown cellulose), it may compact over time, which reduces it's effectiveness.

For your original issue, get yourself a contactless IR thermometer, walk around the apartment, and check the temperature of everything. This will help you discover any drafts or other missing insulation. 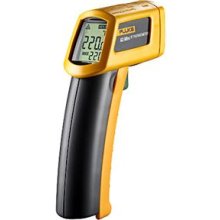 Since this is sudden, it indicates that something has changed, such as low coolant levels in the AC unit, a broken vent pipe, new roofing installed that isn't as reflective as the old, a cut down tree that was shading your building, etc. To diagnose low coolant levels, any half decent AC repair man will use a manifold gauge set: 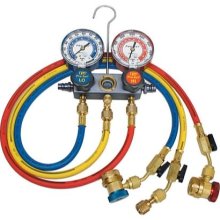 Had the problem always existed, it may have been the case that the AC unit itself has too low of a capacity for your home.

Some insulation loses r-value if it absorbs water.

Some insulation can settle in walls leaving gaps.

And some of the early blow-in foam insulation was of a poor quality that shrank over time.

So it could be true, but as mentioned it depends on the insulation.

As insulation becomes compacted, it loses effectiveness (R-value). Most insulation materials (fiberglass, cellulose, etc) will settle over time, reducing the R-value, but this is usually a very gradual thing over decades.

It is possible to ruin insulation by crushing it. Don't stuff a thick roll of fiberglass into a really narrow space. Don't walk all over insulation and flatten it. The fluffier the better.

If your insulation gets wet, this will also make it settle and ruin the effectiveness. Wet insulation is also a place for mold to grow.

Not the answer you're looking for? Browse other questions tagged insulation air-conditioning or ask your own question.

3
Besides insulation and air conditioning unit, what else is there to check if my A/C isn't keeping me cool?
5
What can I do in this vented crawlspace to keep the room above warmer?
3
High Power Bills Related to Air Conditioner
0
Prevent Portable AC from tripping breaker
7
Freeze prevention in garage
0
How to vent garage in summer?
0
Honeywell T6 PRO Z-Wave Thermostat (model th6320zw2003) exhibits very erratic behavior after battery replacement
0
How to improve insulation in a single room