My question is, Can I use the G terminal (since it's connected to the circuit board already) to connect my C wire up (to provide 24V power to my smart thermostat), or should I connect a wire from the unused W2 terminal and connect it to the C terminal on the circuit board, and us that to run 24V power to the smart thermostat. Or is the heater just incompatible and I'll need to buy a battery operated wifi thermostat?

After more carefully reading your question:

Neither G nor W1 are suitable to use as a common (C). The C connection is there in the unit as you said, but not present on the rear terminal strip.

After reviewing the wiring diagram, it looks like there's a couple places you can connect a C wire. 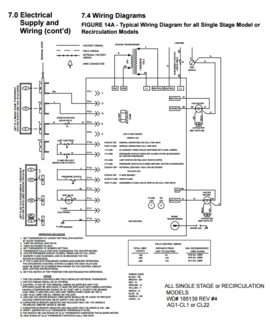 The secondary side of the transformer connects to the circuit board via the SEC and COM terminals. Without seeing a schematic for the board, I'd have to assume that SEC feeds to R, while COM feeds to C. This could easily be tested, by measuring the voltage between the R terminal and the COM terminal. If you measure ~24 volts, then my assumption is correct, and you could connect a C wire to the COM terminal.

Not the answer you're looking for? Browse other questions tagged hvac thermostat-c-wire heater or ask your own question.