I've got this wall, from which I've ripped off the drywall. The wall is 5' wide, 9' high. There's 4 flimsy metal studs and I'd like to install a few big sheets of plywood over those so I can put up 6 five foot long shelves. I would like to join 3 cut up pieces of 2x4 to the big beam on top to block out a little past the metal studs, and then attach some pieces of 2x4 to the floor. After that, attach a long sheet of plywood to those 2 blocked out pieces. My question is, would that be a strong enough way to hold down an 8' sheet of plywood, only securing it by 2 ends? Here's a picture of the situation: 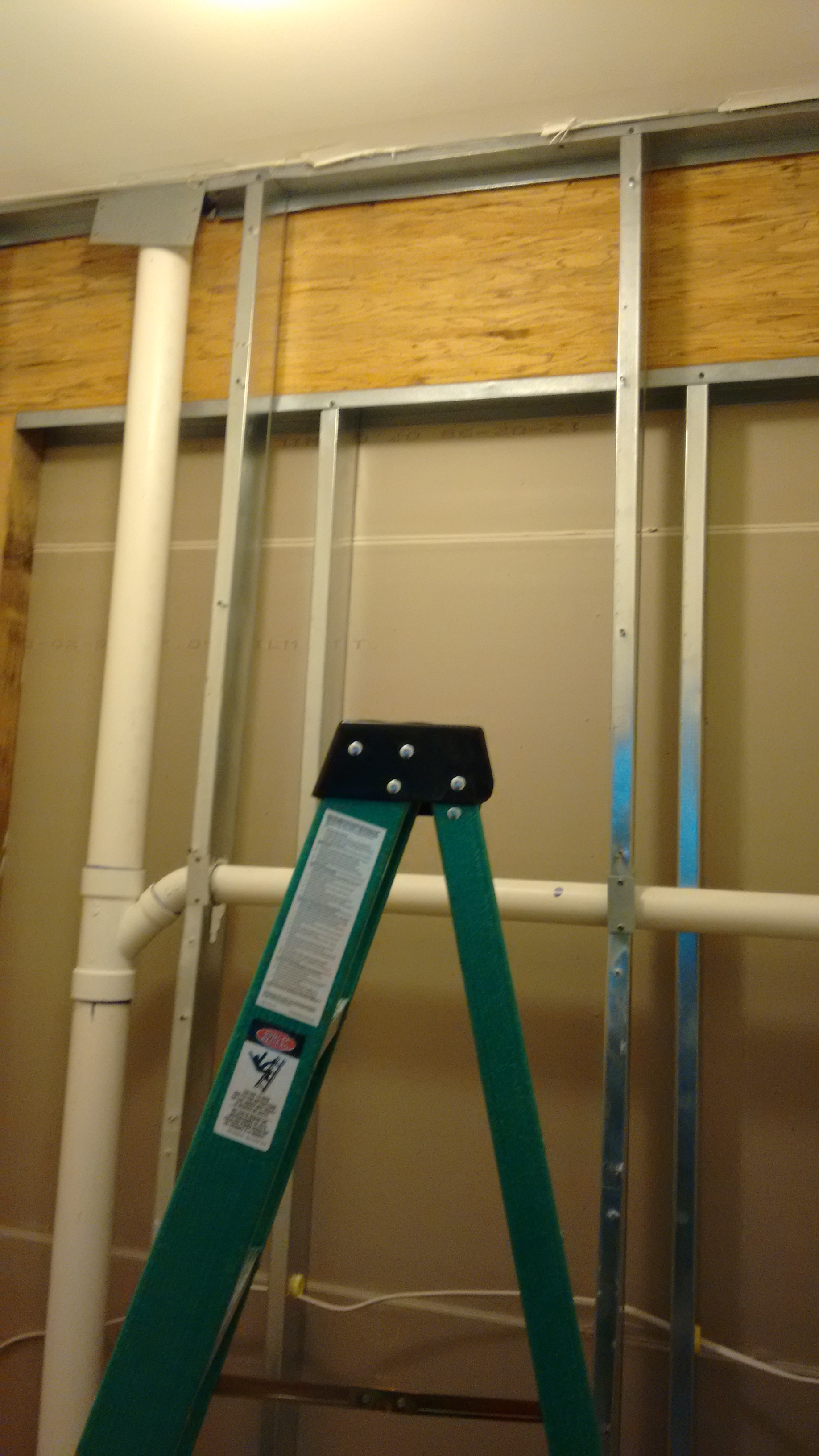 So, you've got lots of options, some of which no "real" contractor would ever do, but are perfectly fine.

If you use long drywall screws you can screw your wood blocking to the metal studs, just like you would if the studs were wood. Sharp screws will penetrate the metal studs. This is not optimal because your skill at doing this non-standard solution could result in shelf failure later, though it's probably what I would do.

You could do as one of commenters suggested and put stand-alone shelving agains the wall and attach it with brackets to the new drywall or directly into the metal studs- perfectly fine - very DIYish. Use drywall anchors.

You could screw shelves directly into the metal studs - they are studs - they hold weight - no problem. This is also something I would probably do. Use drywall anchors.

You could use 1/2 or 3/4 plywood on the wall instead of drywall. Kind of odd, but it will provide excellent holding capacity to attach shelving. (I have a plywood wall in my mudroom - shelving bolted right on.

You could attach vertical wood 2x4x on top of the drywall floor to ceiling, attached to the studs (essentially a new set of exposed studs). Then attach your shelving to that.

Basically, your goal is to get something that isn't going to easily rip away from the wall...and a nearly infinite variety of screws, wood and brackets will satisfy this.

The shear strength of a few dozen appropriate screws through 1/2" or better plywood into the steel framing, plus the load distribution of its own rigidity, will give you more than enough strength to carry several hundred pounds on your shelving. Some caveats:

Note that the fastening power of any screw is largely dependent on its diameter--a 50% increase in diameter yields substantially more thread circumference.

Not the answer you're looking for? Browse other questions tagged framing shelving or ask your own question.

5
How do I prevent doors on a media cabinet from sagging?
1
Wood Cladding Construction Technique
2
How should I build a low profile stud wall in a basement?
0
Removing a wall to the ceiling / roof
3
I can't notch king studs to fit an electrical box, right?
0
Hanging heavy things on old walls. Running out of options. What would you do
1
Buckling notched jack studs - how to remedy?
0
Hidden/Floating Hardware for Solid Wood Alcove Shelves?
0
What are my options for grab bar blocking when pipes are in the way?