Is there enough here to get a ceiling fan?

I want need a ceiling fan in my living room. I looked at a few wiki-how type articles on installing them, and it looks like they need more than 2 wires, but when I opened up the light fixture on my ceiling, it looked like it only had 2 wires, a white one and black one. 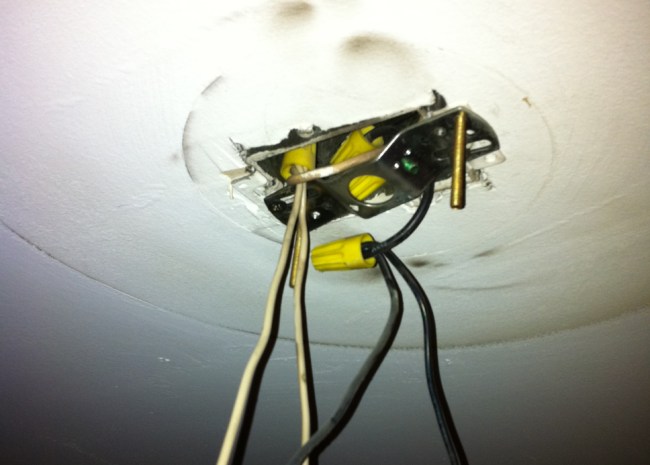 My apartment is pretty old. When I looked up there with a flashlight I could see a ceiling joist right next to this box, so I think it is strong enough to hold it. Do I have everything I need electrically here to install a ceiling fan?

Electrically, yes. A ceiling fan works just like a typical light fixture (in most cases), when you flip the switch the fan turn on (assuming the pull chain switch is in the proper state).

Structurally, maybe not. Keep in mind the electrical box that is currently there was designed to hold the weight of a typical light fixture (a couple pounds max), not a ceiling fan (15-50 lbs). It's possible the electrical box itself will hold the fan, but I wouldn't put any of my family members under it. they make "Old work ceiling fan boxes", that come with a brace that spans between the joists to hold the extra weight of a ceiling fan. The brace bar expands and contracts, so you can stick it up in the hole (after you remove the old electrical box) and then expand it until it bites into the joists. Then you'll hang the new electrical box from this brace, and install the fan as usual.

The other guides where you were seeing with more wires may have been for wiring up a fan with a light and being able to control the two individually.

If you are going with a fan only or the ceiling is low enough where you will be able to reach the pull cords to control the fan and light directly on the fan, then hot and ground should be all you need.