In a gangbox with switches on two different circuits, how can I identify which neutrals are associated with which circuit?

Here is a crude wiring diagram of the switches and electrical box in question: 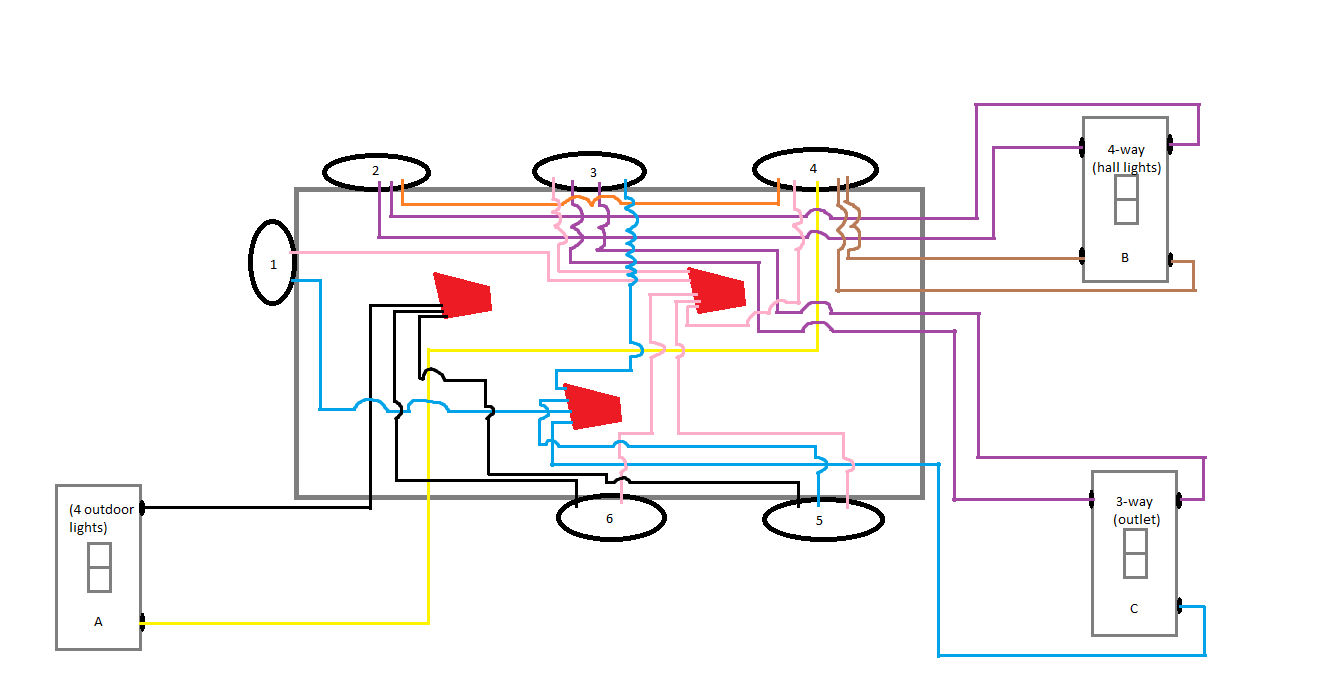 What is the easiest way to figure out:

Are the breakers adjacent? If so, you're probably looking at a multi-wire branch circuit which should--but doesn't--have an approved tie-bar device between the two breakers, and which would use one neutral for both sides of the circuit.

I realize this is an old question, but just thought I'd take a stab at it. From the way you've described things and from your drawing, I believe the pink(white)wires are a shared neutral between the black and blue wires originating from KO#5, which means these two conductors need to always be kept on separate ends of a single phase as they probably are (measuring a nominal 240v between them in the panel and 120v to ground individually) or on separate phases in a three-phase panel (measuring nominal 208v between them and individually 120v to ground). Current code requires the individual breakers to be handle-tied together so they will be turned off at the same time, or on a two-pole breaker accomplishing the same.

As for the orange wire, normally this color is reserved to indicate high voltage or for the high leg of a delta three-phase usually seen only in commercial or industrial applications. But seeing as how there are two other three way switches on that lighting circuit (one at KO#2 and one at KO#4), I believe the orange wire is the switch leg attached to the common screw of the three-way switch located in a box at the other end of the cable or conduit attached to KO#2. The orange wire comes from there and leads to the box where the last three-way switch is located. It is at that far box (not shown in the diagram, but attached via KO#4, let's just call it "HallBox") where the lighting loads for the hall and the outdoor lights are apparently also attached. The only weird thing I see here is that it appears there is no feed originating in this box for the hall-way lights, because otherwise one of the hots should be exiting through KO#5. It might be where the wires exiting through KO#1 end up. Or, it could come in as a separate branch circuit from the panel.

Neutrals in this diagram appear to be tied together correctly, but neutrals in HallBox need to be identified and kept separate according to their loads. The loads are the key to separating the neutrals. In other words, HallBox probably has both Hall-way lighting-load conductors and Outdoor lighting-load conductors entering it. In HallBox, tie all Hall-way lighting neutrals together, but keep them separate from Outdoor neutrals. It doesn't matter if they are on that same shared neutral, you still need to keep them separate to avoid paralleling conductors and creating heat build-up. This is something that may well have been done incorrectly in HallBox, but I've given you the knowledge tool to correct it if so. Really, I see no other possibility. You've definitely got a situation where the neutrals should be kept separate in HallBox, whether it is fed with a third branch circuit or it's an extension of the blue wire from KO#1.

1
Testing and proper breakers for a multi wire branch circuit?

6
How do I convert a light circuit with a single pole switch to use two 3-way switches?
0
How do I update two 2-wire switches housed in a single box? Both switches are combination switch and PILOT light
3
GFCI Problem with Three-Way Switch WAS Two Switches Neutrals Only, Switched Hots Not Used
1
Single light switch to programmable - 2nd hot line?
0
Bypass a three-way switch for the next single pole switch in the same circuit to work on a different light?
0
How do I wire my ceiling fan with two switches (one for lights the other for fan)?
0
how to wire two switches in one box with three wires , two of the go to different lights, which one is hot
1
Why are these 2 dimmer switches connected like this and how can I rewire them with 2 traditional switches?
3
Why is there voltage between the hot and traveler or other wires when all switches and fixtures are disconnected?