I bought a new home recently and found that the water in the bathroom tub/shower comes out of both the showerhead and tub spout (when the diverter is "off").

I removed the spout to see if there was anything clogged inside. As I was removing it, I noticed that there was some caulk/glue on the base of the spout where it met the wall tiles. Turns out the spout wasn't clogged, so I put it back on for now. To my dismay, water now sprays out of the now-unsealed spout base when the shower is on.

I have a few questions:

2) What is causing the initial problem of having water come out of both the showerhead and the spout? Will replacing the spout do the job? Is the short water pipe a concern?

3) Do I need to put some sort of sealant/caulk around the spout base like it had before? 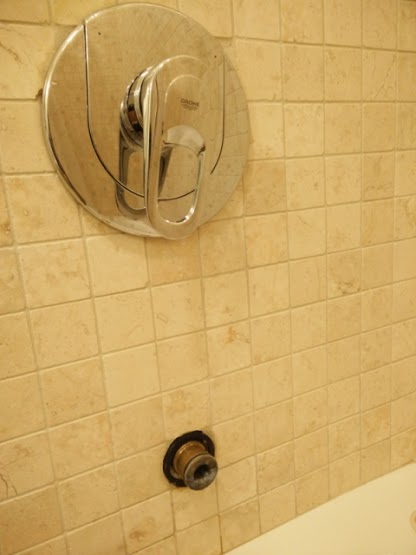 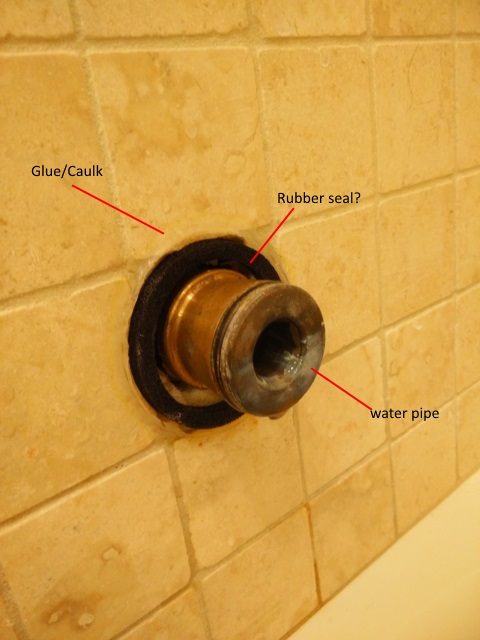 What you will have to do is remove the round piece that is shown in your photo. I believe it was an integral piece from the spout. The small thin O-ring that you see on the most forward section should be pressed into the tub spout for a pressure fit. Since that is what keeps it connected to the spout (as opposed to being mechanically secured) it most likely (and easily) loosened as you were repairing the spout. If you use a pipe wrench or a pair of channel lock wrenches (protect the pipe with a rag wrapped around it) it should unscrew counter clockwise. With some luck you will have removed only the spouts base and not the 1/2" pipe nipple inside the wall (you should be able to see the threads inside the wall). Re-connect the spouts base by pressing the two pieces together. Apply Teflon paste to the female threads on the bottom at tighten back in place. What is causing the water to leak is most likely: 1)the valve handle is not exactly in the off position , 2) the washers or valve cartridge needs replacing, 3) the water may not be a leak , but residual water that remains in the pipe after the valve is closed.

Not the answer you're looking for? Browse other questions tagged plumbing faucet bathtub or ask your own question.

6
Why does my shower head drip when the tub faucet is on?
2
What might cause water to leak under or behind a bathtub?
1
Shower periodically loses hot water, and then the bath faucet will be scalding
1
Why is hot water coming out of the faucet but the shower is ice cold? (Diverter not on spout)
1
New bathtub diverter spout drains back into wall
0
Can I extend a tub/shower diverter nipple?
1
Why has my tub spout diverter not dropping back down after use? (brand new installation)