How to diagnose a greywater system backup

In recent weeks I have noticed that the drain pipe from the washing machine has been overflowing into the laundry room. We stopped using the washer thinking that we needed a plumber to come to the house. I live in a rural area where it is difficult to get a plumber out. I was outside while my wife was using the dishwasher, and I noticed water bubbling up from the ground. I grabbed a shovel and dug down to the greywater piping. I noticed a hole had been cut into the piping because the hole in the pipe didn't look natural. It looked like it was made with a reciprocating saw. 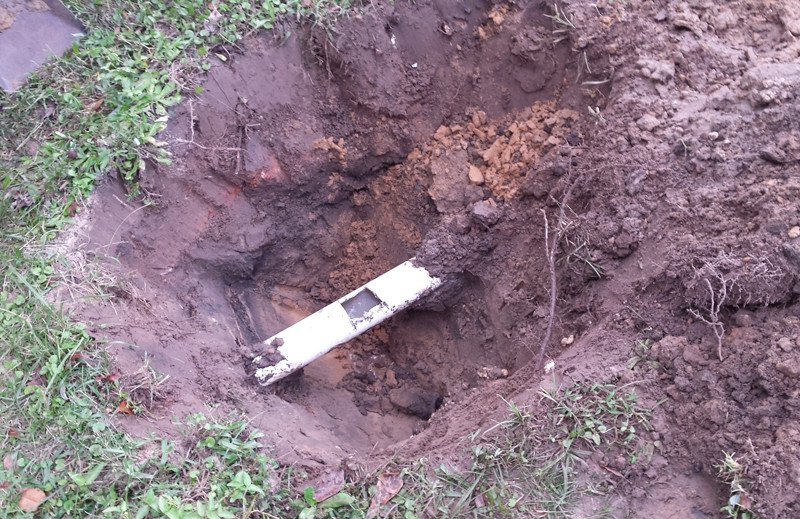 I am not sure why this hole would be there. Maybe as some type of makeshift release valve? I don't know if there was something covering the hole while it was underground, but I know for a fact that this is where the water was coming out. I covered the hole and the water started backing up into the house, so it seems like the system is clogged or full. The previous owners told me that the greywater system is pretty new, but they owned this house as their winter home and didn't spend much time testing the system.

Not far from this is a pipe sticking out of the ground with a cap on it that I can unscrew.

My question is how do I diagnose what the problem is? Or what are my options? I have called the plumber several times, and I am sure he will get out to me eventually, but it is at least $100 for him to make the trip, even if he cannot help me. I am hoping to accumulate as much knowledge about the situation as I can so I make the right decisions. I just don't have the money to throw at this problem until it goes away.

Edit for more information: The drain runs out to an area about 200ft from my house from what the previous owner told me. There is no above ground parts to the system except for the pipe with the cap on it near the house. I snaked the line for about 50 feet and could not find any blockage, but that doesn't mean much. I suppose that I need a longer snake to really test.

I would bet the pipe IS blocked and the previous owner or his handyman opened up the pipe to get it to drain into the yard. You need to have someone figure out where this line is going (maybe with an inspection camera) and clear it if the output is proper. Most likely it is clogged with roots and soil.

It should drain to daylight or a well constructed drain field. Apparently, it does neither, hence the blockage. Possibly, blocked from lint build-up from the washing machine or was poorly constructed in the first place.

Rent a longer snake insert it all the way to the blockage and try to clear it. If you can't clear it, use a metal detector to find the snake and locate your blockage so you can dig it up. (Unless the previous owner left you with some accurate drawings for the installation.) Apparently, it is not buried very deep.

Not the answer you're looking for? Browse other questions tagged plumbing water pipe drainage or ask your own question.

1
How can I stop this drain pipe from backing up?
2
Water seeping through my foundation in the garage - what is the source?
3
Hot water pipe sticking up in back yard?
1
Plumbing - Particles / Debris In Faucets and Toilets - Water Softener Going Bad?
0
Water Filter system - backwash from sewer?
1
Capped Water Heater Pressure Relief Extension Pipe
1
How to cap this water pipe so it is flushed with the concrete?
1
HVAC leaking from saturation
2
What is This White PVC Pipe in My Yard?