Can I connect copper wire to aluminum wire?

I'm installing additional light bulbs in my basement. I have an older house with aluminum wiring.

Can I do this:

Is it safe / does it comply to code ?

Ignoring expensive crimpers, Ideal Twister Al/Cu (purple) wirenuts are NEC compliant. (Your jurisdiction might vary.) They are not for use on aluminum to aluminum connections (which is a little baffling to me, but I digress). You can find some controversy on the net about the safety of these, so read up and decide if they're appropriate for you.

Another compliant option is the King AlumiConn, which can connect both aluminum to copper and aluminum to aluminum. These require a precise torquing of the screw connectors.

Depending on the wire going to your light, you might have to pigtail copper to aluminum in the above manner and then wirenut the new copper to the light.

I've heard people say that a squirt of no-alox in a standard wirenut is fine, but it is not code compliant in my neighborhood. (And probably nowhere.) And it should go without saying that a normal wirenut is absolutely not compliant anywhere.

Straight out of the National Electric Code 2014

I bought a house with aluminum wiring so I had to educate myself on what was so different. The only way considered safe to connect copper and aluminum is through a splice connector. Specifically, you have to connect the wires individually so they are not prone to corrosion.

The Ideal connectors (purple, for aluminum) are not considered a good fix because all they do is contain a paste that is supposed to help prevent corrosion. This can be deceptive that you've "fixed" the problem and lull you into a false sense of security

The effectiveness of “pigtailing” using twist-on connectors has been evaluated by CPSC staff. In CPSC-sponsored laboratory testing and life tests, substantial numbers of these connectors overheated severely.

What the pigtails fail to address is the other danger of aluminum/copper joining: thermal expansion. The problem here is that wires under load will heat up some. Because copper and aluminum expand at different rates, this allows your pigtails to move some. The wires can work themselves loose inside the nut, creating an arcing situation, and eventually become a fire hazard, as demonstrated by this picture (link defunct) 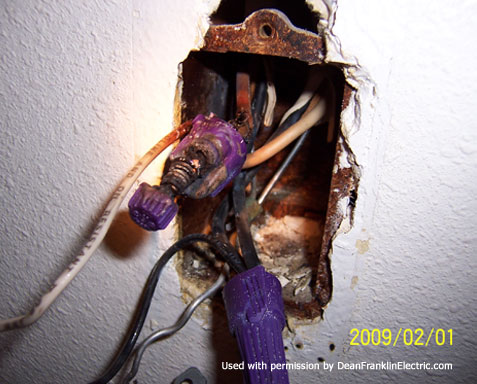 So why doesn't every copper-to-aluminum pigtail fail like this? Mostly it's because, at lower amps, the wires produce very little heat. As such, you can "whistle past the graveyard" and install these, hoping you never modify the circuit to where the wires can produce enough heat to work themselves loose into an arc fault.

Splicing is the only true safe solution, as it allows the wires to expand at different rates.

I went with the AlumiConn splicing product. (Copalum, the other splice for this situation, is for electricians only, as it requires special tools). They not only splice, they contain anti-oxidant jelly already added. It's relatively easy to find (a local big box and a local electrician store both carry them, although they're pricey) and can be installed as DIY as long as you get the lugs tightened to the torque specs (I bought a torque screwdriver since I had so many to replace). You can use a non-torque method if you want. Also, make sure the wires are actually connected by giving them a tug. I was able to replace several places where previous electricians (and even the previous owner) had simply used regular pigtails and crossed their fingers. So far, they have been very effective in letting me splice copper in.

You can find WAGO 273 with contact paste inside from factory, at least my nearby stores have them. Any WAGO have tinned coper core which can be safely connected to both aluminum and copper wires. Contact paste protects from moisture (which can connect wires and they will corrode) and also have some grain material to remove surface oxidation from wire.

Working with aluminum wire requires knowledge of it properties:

Be aware of that properties and you can safely get rid of handle aluminum wires.

The aluminum issue is an interesting one.

In part because you need to not only understand the problems that occur in aluminum connections, but also how code is handled.

The National Electric Code dictates that products are used in their listed capacity and only so. Further, if the product is "listed" that doesn't mean you may use it, as the "Authority Having Jurisdiction" will have the final say.

The Ideal purple wire-nuts are listed, and must be used according to the products instructions. Some of the failures arise from placing to many conductors in the unit. I'd say to hire an electrician to ensure proper installation and use, but I've seen some over-stuff these connectors, among other issues.

The alumiconn connector is the best middle-of-the road option. You would need a torque-screwdriver.

Finally, there is copalum which is by far the best process, but you have to be a licensed electrician, factory trained and have the crimp tool leased to you (They do this to prevent improper installations)

Hiring a professional: I'm seeing the aluminum wiring issue come up more and more during home-sales. Lenders and insurance companies are requiring the wire to be remediated by a Licensed Professional, and receiving a signed letter including the contractor's name, their license and other pertinent information.

I mention this because if you try to DIY this, you may get stuck hiring someone such as myself to come and verify that it's correct. If I were to receive such a request, I would have to inspect every device and it would take me nearly as long as doing the remediation.

I came across this while looking for something else. I know that it's an old discussion, but I wanted to leave this for anyone searching in the future.

When I moved back into my house in '05, fortunately little brother, a recent electrician journeyman, was about.

I had a couple of warm sockets.

I'd a '67 or '68 house with aluminum wiring, which was done for a couple of years here in the Las Vegas desert.

So it took almost 40 years for the reactions to be noticeable.

Noticiable, because at some point, the sockets were likely replaced (or was the code fool enough to allow copper sockets back then).

Anyway, we went through replacing sockets and using the purple nuts with the anti-oxidant goo.

Fast forward 10 years, and one stopped working. Pulling the plate, I had a melted purple nut, like the one above. And found that Lowes and Home Depot no longer carry them (banned?). I bought a couple of the even more expensive push-wire connectors and installed.

It was only then that I found that Lowes stocks alr/co sockets! About three and a half bucks each. Four times a regular cu socket, but less expensive than either of the purple mating solutions. (at Home Depot, it appears that they can be ordered. when searching, use "alr" not "aluminum" to find most.)

Also, they seem to either have print on the back saying that they can be used with either aluminum or copper, or be stamped with "alr/cu" on the lower right near the detachable tab.

The only real catch so far is that if someone already mated a copper pigtail with the two aluminum daisy chain connectors, you can't find aluminum wire for the daisy chain.

This is easily solved; just connect one Al wire to each screw, as was likely done in the first place. (they seem to unstable to put two on the same screw.

Do not, for Heaven's sake, try to put an Al and Cu on the same screw!

For two-gang boxes with two sockets, you could use a nut or whatever to join the two Al before attaching the pigtail to a screw (unless you can really get two onto the same screw), and then run a copper pigtail from the other. Or, more easily, Al to the first socket, Cu between them, and Al from the second to continue the daisy chain.

So I'm working my way back through the house, replacing the fifteen year old replacements.

Stuff like splicing connectors or push wire connectors are for that purpose. Both solve the problem of connecting two different metals which normally cannot be done directly. You need to apply special contact paste to aluminum wires before inserting them into connector. (Another source.) The two types somewhat differ in usage.

Splicing connectors are more expensive but can be easily used also with stranded wires or braided wires. Latter ones are cheaper and are suitable only for solid wires.

I know this is a very very old post, but I thought it was important to explain the reason behind the marrett failing in the picture so people that find this via google images dont jump to conclusions. This was installer error, as you can see there was no PRE-TWISTING of the wires to ensure a secure connection. The issue here was a loose connection, leading to arcing, which melted the marrett. I work for insurance companies and see this all the time.

THIS IS WHY YOU PRE-TWIST YOUR CONNECTIONS AND SQUARE OFF THE END.

Not the answer you're looking for? Browse other questions tagged electrical aluminum-wiring or ask your own question.

0
What is the safest way to pigtail aluminum wiring?
0
Alumium Wiring in Charlotte, NC
6
Should a water heater's anode be replaced?
0
Electrical: How do I connect copper ground wire to metal wire passing through switch box?

4
Can I transition from aluminum wiring to copper wiring at a CO/ALR receptacle?
5
Connecting 6 gauge aluminum wiring to 10 gauge copper with AlumiConn
2
10/3 Aluminum 20A with multiple electrical circuits? What is correct wiring?
2
Why would a new switch come with aluminum wires?
3
ALUMAFLEX Wire + Copper Wiring
1
Reuse aluminum wire for basement Sauna heater
3
High temperature aluminum to copper connection
4
Can I replace the aluminum cable of a single circuit with romex?
3
Can I use an existing range circuit for a new sub-panel?