light switch will not move

My kitchen light switch suddenly will not move up or down and I cannot turn the kitchen light on. Is there anything I can do to fix it (I'm a duct tape/WD40 kind of fixer) or do I need to call someone?

The switch sounds like it needs to be replaced. There are a few tools that everyone should have when they do electrical work.

These tools in no particular order are:

The first thing to do is locate the breaker panel and shut off the breaker to the light fixture. This may take time if the panel is not well marked. Once the circuit has been identified, turn off the breaker and place a piece of tape over it to remind anyone to not turn it back on. Blue painter's tape works well for this because it does not damage the sticker on the breaker when the tape is removed. Also take note of the amp rating on the breaker. It should either be 15 or 20 amps.

Once the power has been verified as off, check the amp rating on the switch. It should match or exceed the breaker amperage. The rating will be stamped somewhere on the switch. It is code to use a 20 amp switch on a 15 amp circuit, but not vice versa.

Count the number of wires on the switch. A normal 2-way switch will have two wires which are usually black, or a black wire and a white wire with the white wire wrapped with black electrical tape. It will also have a bare wire for the ground. A 3-way switch will have 3 conductors and a ground. From your original question, you said you can't turn the light on, which means you probably have a standard 2-way switch.

When you have determined that correct amperage, and type of switch, go to your local home or hardware store and purchase a switch with the same rating.

With the power still off, remove the retaining screws and gently pull the switch out of the box. Unscrew the terminals one at a time, and keep note of how the wires were connected. You can do this by bending the wires in a certain direction, or marking them with tape. If the end of the wires are chewed up, cut the tips off and strip them back. You only want to strip just enough so you have enough bare wire to wrap around the screw terminal. You don't want to strip in excess to that. The existing installation should be a good guide on how to strip the wire and bend it for the terminals. The direction that you bend the wire matters. You want it to bend in the same direction as the screw tightens which is clockwise. If the wire is on the right hand side, bend it up, and bend it down on the opposite side. If you do it the opposite way, then the wire will tend to pop out of the terminal as you tighten it. Some switches have push in terminals that allow you to push the wire in. It is much better to use the screw terminals. When you screw down the terminal, make sure that there isn't any insulation trapped under the screw.

After all of the electrical connections are done, wrap the terminals with a layer of electrical tape. You basically will wrap it all the way around the switch at least once so the tape won't peel. This is done to help prevent a short circuit in the box. The shorts are more common in metal boxes, but it could happen in any of them.

Assemble the switch by reversing the steps you took to disassemble it. Turn on the power, and test it.

If you are here on Stack Exchange asking if there is a way to fix a light switch, then I would guess you're handy enough to replace it. It truly is simple and should only require a screwdriver. Turn off the breaker, 2-screws on the cover, 2-screws on the switch, 1-screw for each wire (probably). Take a photo of it with your phone before disconnecting the wires so you'll remember where they go. You can purchase a standard switch at any hardware store (or even Walmart!) for pocket change.

If you come up with anything other than what is described here when you take it apart, post a photo and we'll help. 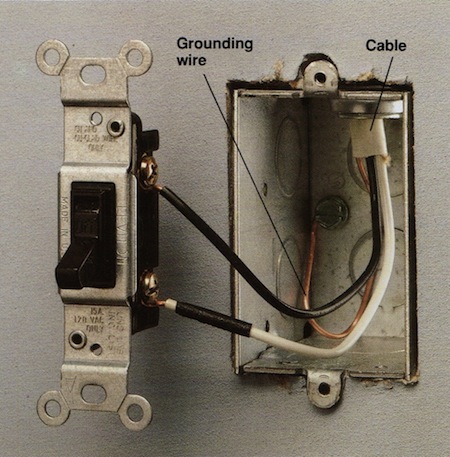 The light switch needs to be replaced. Even if it starts working by some trick, unreliable contact is a fairly large fire risk. Do not spray any chemical into electrical equipment, especially not without cutting the power first.

As to who does the replacement, that depends on where you live. If you rent, it should be the landlords responsibility. If you own the house, you'll probably want to call in an electrician. In some countries you are also allowed to replace it yourself - it is not a difficult job if you do a bit of research.

2
Ceiling Light with no switch to turn off
7
Why is my light switch leaking electricity?
4
Dimmer switch not turning on light until at 50%?
1
How to find a motion sensing light switch that turns lights on AND off when motion is detected?
1
Why is my kitchen ceiling light not turning on with the light switch?
1
How do I add an electrical switch for a closet light using an existing light switch?
0
How to wire two light switches, two lights, and one duct exhaust fan so lights work independently but fan works on either switch?
2
New light switch causing other switches to not work
4
Room Light Switch Malfunction
3
Circuit breaker trips when ANY light switch on the circuit is turned on