Do ceiling joists need to rest on cross beams?

I am having a new home built by a national builder. They are framing now I see that ceiling joists in one area are not resting on a beam that divides two open rooms.

See the photo. The beam that runs in from the left side separates two open rooms. The room to the left of the beam has an 18' span. The room on the right side of the beam, has a 16' span. As you can see, the bottom rail (?) of the joists are not resting on the beam. Is this a structural issue I need to worry about? 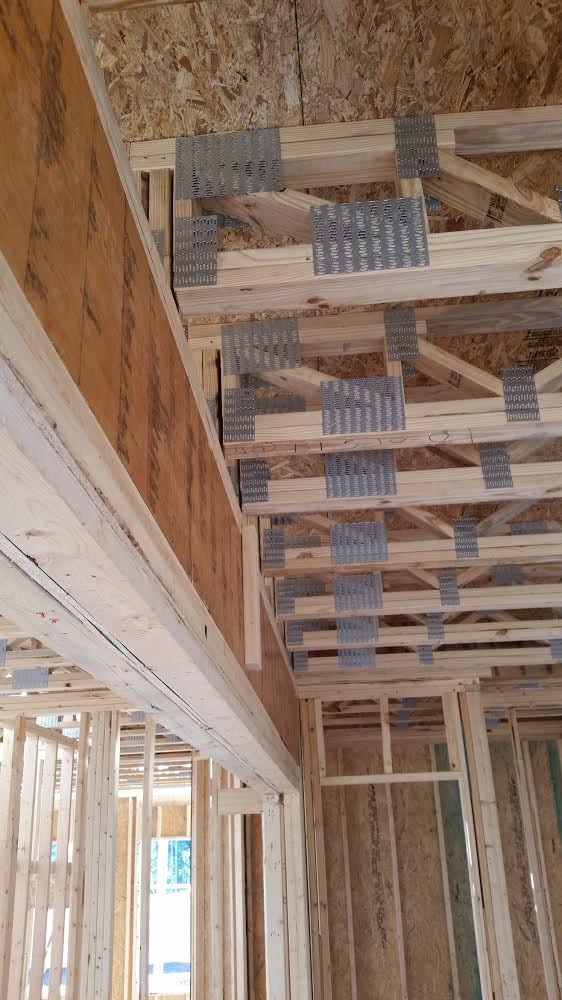 The top rail of the joist is indirectly supported since it runs longer but I am not sure if this is enough. The same model is being built down the street and the same joists do rest on the beam, but only by about an inch.

This is fine. It's a wooden open web truss system.

The weight is transferred to the column at the one top point. The lower bar and diagonal bracing are to prevent the top bar from sagging over a wide span. The lower bar extends all the way to the wall so there is something for the ceiling drywall to screw into, but isn't supposed to rest on the column.

These appear to be engineered as top chord bearing floor trusses. The installation appears to be consistent with typical installation requirements for such systems.

Not the answer you're looking for? Browse other questions tagged support new-home beam or ask your own question.

8
How can I safely remove and replace a wall?
1
Board on top of joists in attic. Is it structural?
0
Beam dimension determination
0
LVL Span Ratings and Beam Placement
2
Wood beams for pallet rack wire decking
1
What size LVL beam to replace 17 foot load bearing wall (marriage wall) on first floor of two story colonial modular home
0
Is it safe to build a long beam from shorter pieces of lumber?