Hoping someone can help me figure out whatever it was was they did. I recently rewired a three way switch be eliminating one switch altogether and using the other as a typical switch. Everything seems to work, no breakers have blown.

I'm simply curious to know what was going on.

At the first switch, there was a white, a black, and a black.

At the light, there were two blacks.(!) I know that sounds odd. One of the blacks was coming from the first switch and terminating at the light. The other black started at the other terminal of the light, spliced into the black of a nearby bedroom outlet, and then traveled on to the other switch, where it spliced yet again into a switch, and some black heading to the main panel.

The white of the outlet mentioned above was also spliced into, and that white headed away to the service panel.

The best way I can describe this is there was black coming from two directions. What made this set up really odd is when the second switch was switched "on", all of the lights on the circuit would dim/glow, sort of as if on half power. A plumber once mentioned he thought there was a "shared neutral", where as an electrician once mentioned there might be power going on a neutral.

Anyway, it's now gone. When was all of this wiring done? early 1900's. I'm just curious to know what was happening.

To add one more piece of information, someone added a second breaker to this circuit in the mid 1900's. Thus when the breaker was tripped at one end, it was never actually tripped througout the entire circuit until the second breaker was also tripped. Maybe this shed some light on the so called shared neutral thing.

Now that the second switch is completely gone, each breaker handles its own unique circuit, the two circuits have no communication any longer.

Regarding the original light that had two blacks, I cut the black that was not coming from the switch, I labeled it white, and I joined it to another white on that particular circuit. It now works as a single pole switch.

Sacrificed in all of this was the ability to have a three way switch, but I did not need one, it's not in a hallway, it controlled an exterior light that is rarely used.

This configuration switches each "side" of the lamp between hot and neutral, as depicted in the illustration below: 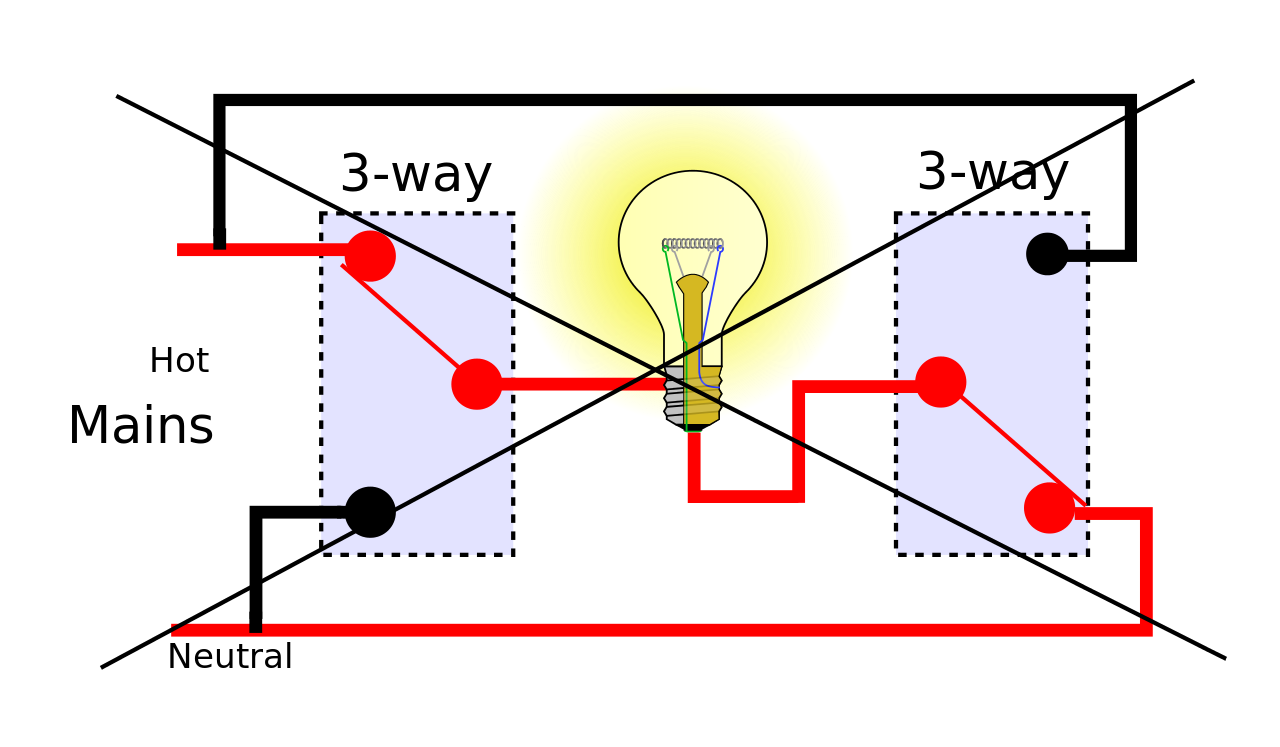 However, due to the switch in the neutral wire, it was possible for the shell of the lampholder to be hot even if it was switched off, leading to a shock hazard! As a result, this configuration was banned by the NEC and remains forbidden to this day. You were correct in removing the Carter 3-way from service.

The second circuit feeding the Carter 3-way was also a rather egregrious Code violation (300.3(B)/310.10 if nothing else), but your work has cured it as well. (While the current configuration isn't completely Code-conformant, you've gotten as close as you reasonably can without running new wire.)

Not the answer you're looking for? Browse other questions tagged switch multiway-switch or ask your own question.