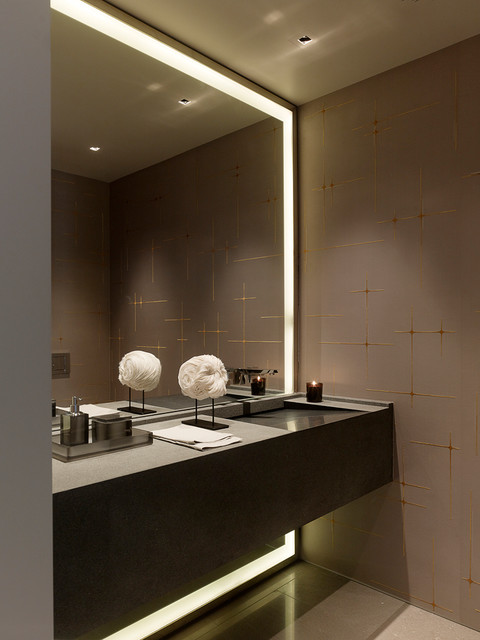 The source depends a lot on how the surface of the lighted mirror border is created. If the same sheet of glass forms the mirror and the lighted border area then this is certainly a specially made glass. Such glass would have the mirror finish applied across the back with the border edges chemically etched to create a frosted glass behind which the back light is placed. Seems to me that producing such thing would be prohibitively expensive even to the extent that I doubt that you would find a manufacturer producing a product configured like that.

The back light looks to me like it is multiple strips of white LEDs affixed to the wall behind the border material.

So I would conclude that it would be an entirely possible DIY project to produce such a structure by installing the LED strips, and wiring to power them, then install a wooden frame on the wall that was a bit smaller in dimensions than the mirror glass. Next the border strips would be mounted from the wall/ceiling/floor edges over the LED strips and affixed to the wooden frame. Plastic border material would be far more practical as it could be mounted with flat head screws into the wooden frame. Finally the mirror would be placed in front of the wooden frame to hide it and cover the mount points of the border material.

One would hope that the LED strips have a long life as it would be quite the undertaking to disassemble the whole thing to replace them.

Another note. Although it is built to look like the mirror and back lighted borders are fully extending behind the vanity it seems highly unlikely to be the case. Repair would be like a full bathroom remodel if the vanity had to be removed to get behind the mirror.

Not the answer you're looking for? Browse other questions tagged lighting bathroom light-fixture mirror vanity or ask your own question.

1
Backlight moving mirror in bathroom
6
How can I determine if a mirror is tempered glass or not?
0
How to make a wall mirror out of mirror tiles?
0
Exterior mirror to bring more light to a window
1
Mount Nissedal mirror away from the wall
15
Safely hang a mirror that does not have hooks
0
Making a Smart Mirror
1
Mounting a small mirror on frosted glass?
1
How to dispose of a large full length mirror?