Something burrowing into cedar planks

I am no landscaper or entomologist, but I pulled apart an old garage (1920s-1930s) and discovered parasites had burrowed into the cedar planks of the garage, as well as the regular pine wood planks which were totally chewed up. The city declared I must take the garage down, which is why I was pulling it apart in the first place.

The parasites are no where to be found, but the boards have cavities much like carpenter ants in nature running along the grain of the wood.

I disposed of all the boards, but one small example for examination, to be safe.

The property was in Michigan.

I don't believe it was chemically treated in anyway. I have a sample of the wood.

A house down the street appeared to be in the process of being fumigated, and I was told as such.

I didn't see any mud tubes, but that doesn't mean they weren't there among the destruction.

There are three here and as you can see they hid from the open sides of the wood and burrowed on dark-sides hidden under nailed beams and the siding. 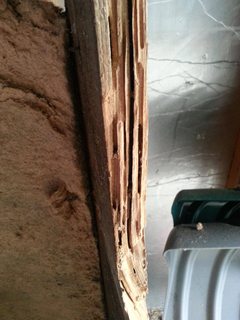 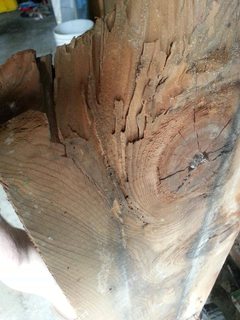 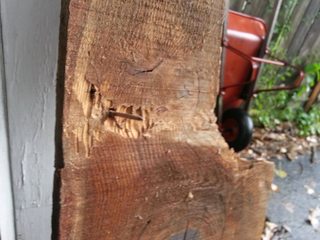 Any ideas what it could be?

Where do you live? Sounds a bit like Formosan Termites to me. Were there mud tubes in the wood? Probably been chemically treated by the last owner, so they're all dead now, but the damage has already been done.

Not the answer you're looking for? Browse other questions tagged pest insect or ask your own question.

2
What is/was tunneling into this 2x4?
0
How to prevent cockroaches climbing onto something?