Why are all towel bars 24 inch? With studs being 16 inches apart - how do people mount them?

I want to install a towel bar in my bathrooms - and I went to Home Depot to get one - but all of their towel bars were 24 inch...
This to me is weird. Do all people just mount their towel bars to a drywall using drywall anchors? That just seems so hackish and unreliable.

Guys - could someone confirm what's the right way of installing a towel bar?

You will find many many installations of towel bars that are simply the crappy drywall anchors on each end. These will work as long as the towel bar is treated with kid gloves. Anything more and eventually the towel bar will end up loose at the wall mounts.

If there is not a framed in set of backing behind the towel bar location then your next best bet is to try to mount the towel bar with one end attached to a stud and the other end secured into the drywall. There is the unfortunate situation however that the stud locations may be sub-optimal for the aesthetic and usable placement of the towel bar.

Many towel bars are the bar itself that then fits into the end brackets. It is often practical to cut off the bar thus shortening it to the stud spacing at hand. This would permit both ends of the towel bar to be secure at the inconvenience of hanging towels on a nonstandard width bar.

I have had 100% success with drywall anchors but I am very careful about all aspects of the mounting hardware. You have to design and execute your plan carefully to have success, otherwise they'll be vulnerable to pulling out as Michael Karas points out. If you mess up any aspect of what I set out below, your anchors will probably pull out. If, on the other hand, you get it right, the anchors will be stronger than the sheetrock.

Select a towel bar where the mounting plate at each end has the following attributes:

This is an example of a good mounting plate (installation guide): 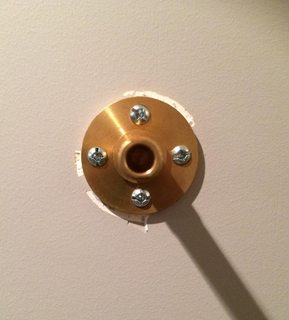 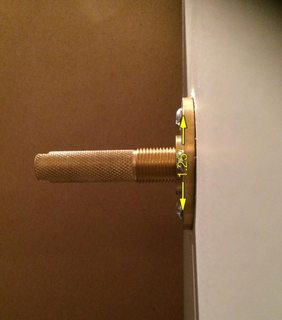 Select Studs or Pristine Areas of Sheetrock for Mount Points

Areas of sheetrock that are in any way damaged (from installation or otherwise) will reduce the pullout strength of the anchors dramatically. I use a power drill with a 1/16" drill bit to test how sound an area of sheetrock is. With a little practice you should be able to detect the difference between seams, drywall mud, studs, and pristine sheet rock. In general you want to avoid the following areas for mount points:

Forget about toggle anchors: The toggles are so bulky and the bolt patterns so crowded that the toggles will usually interfere with one another and whatever happens to be behind the drywall. 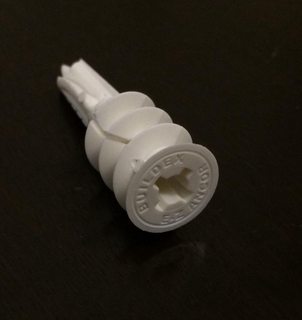 Note how the anchor's threads achieve a large contact area with the gypsum and have deep threads. Note also how the head and barrel of the anchor seal against the paper to keep the gypsum in.

When these anchors are installed correctly they do two critical things to preserve the integrity of the sheetrock:

If your method of installing the anchors doesn't achieve these critical things, you need to re-think your approach because the anchors won't hold.

For reference, here is the data on the anchors I use (I got them from Home Depot): 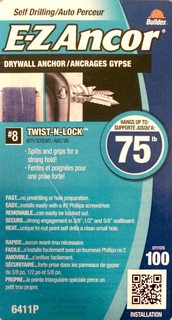 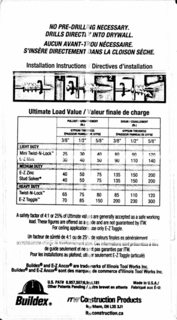 Note the table of shear and pullout strengths -- these are quality engineered anchors. Installed correctly, they have real usable anchor strength.

You have to get your layout perfect, the first time.

You need to get your layout perfect the first time. You cannot undo a hole, or move an anchor 1/4" to the right or left. Once you put an anchor in the drywall you must leave it in there if there are other anchors anywhere nearby. Otherwise the sheetrock in that area will be forever weakened and your other anchors' pullout strength will be severely weakened. You can easily sink an anchor into the paper and float mud and paint over it. You can't however move the location of an anchor once you have drilled for it. Here is my advice for layout:

Pilot Drill at 75% the Barrel Diameter

Forget what it says on the box of anchors about self-drilling. You must pilot drill every anchor hole. No exceptions. Without a pilot hole, the anchor tips will do two things that are terrible:

The pilot drill should be sized at about 75% the barrel diameter. This will result in the right amount of gypsum displacement and will stretch the paper around the barrel for a tight fit without tearing it.

Do not use an impact driver.

The reasons I use a drill are as follows:

Start twisting the anchor into the pilot hole with the drill. Make sure you keep the axis of the drill completely still. If the clutch is slipping, increase the torque setting just enough that the anchor advances into the wall. Stop as soon as the head of the anchor makes contact with the paper. The clutch should slip just as the anchor this occurs. You might have to adjust the clutch to get this right. The head and paper should be snug when you are done. Do not overtighten. Do not back out. Doing either will almost certainly result in tearing the paper or losing some gypsum which will cause your anchor to fail.

Use the screws that came with the anchors.

The anchors and screws that go into the anchors are engineered to work together. Don't try to substitute. Their length and thread profile must be correct for the anchors to work correctly.

Assemble the towel bar to the mounting plates.

Once the mounting plates are installed in the correct position, the rest is just a matter of following the manufacturer's directions to assemble the towel bar.

Here is what one of my installations look like: 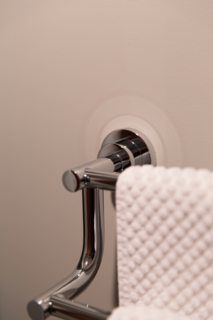 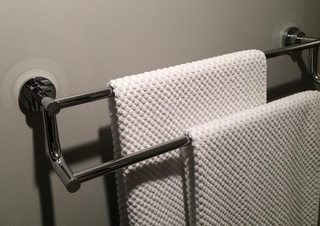 Note that even though the towel bar is overhung about 6", the mounting is plenty strong enough. People knock their elbows on it and grab it to steady themselves without a problem. This works because the load is distributed across 8 correctly-installed anchors for a combined pull-out strength of about 640 lbs and a shear strength of about 960 lbs. At that strength, the weakness is the sheetrock itself, not the anchors. In other words, to break this mounting you'd have to apply enough force to tear a whole section of sheetrock off the wall.

The simplest high-strength solution, if there isn't blocking behind the plaster to support it, is to mount the towel rack on an attractive piece of well-varnished wood (or a piece painted to match the room's trim) and mount that to two studs.

Pre-existing blocking is the best. Studs are ideal, but the (usually) supplied drywall anchors are adequate for the intended purpose.

If someone uses the towel bar as a grab bar, you can upgrade to toggle bolts in the future.

There is a product called SwiftStall Bathroom Accessories that solves the problems identified above. The design and installation method are different and patented.

Here are the features: 1) The accessories rarely come loose or wobble when tightened securely. 2) They can be installed practically anywhere -regardless of stud location. 3) It has far fewer parts that conventional accessories: no set screws or Allen wrenches, no metal plates, no plastic anchors that work loose and no templates are needed. Actual installation process takes about three minutes per accessory, or less.

For single post accessories, a 2-1/2 inch screw and a 2 1/2 inch wing bolt are supplied. The screw and bolt are stainless steel to resist rusting.

First, pick a desired location avoiding electric lines, water pipes, etc that can be behind the drywall.

Drill a 1/8 pilot hole in the wall. If the screw hits a stud, continue drilling deeper and this will be the pilot hole for the screw. If a hollow area is behind the drywall, switch the drill bit to a 5/8 bit to accommodate the width of a compressed wing on the supplied bolt. Towel bars are supplied with two screws and two wing bolts in order to be mounted on dry walls with or without studs present. Be sure to use a level when installing towel bars.

www.swiftstall.com - for photos, information and to order.

3
What screw/fitting to use on this wall?

3
Mounting Full Motion Mount on a Single Stud
3
What's the strongest anchor for something heavy in double drywall?
2
Adding more floor joists in a crawlspace. Originals are 5' OC and need more support
1
Hanging Shelf With 79lb Drywall Anchor
3
No studs for glass shower door - Can I hollow wall anchor?
2
What kind of wall do I have, and do I need anchors?
12
Expedient repair for water damaged drywall behind tile
2
Can a chin-up bar be supported by just two of the four intended mounting points?
0
Recommendation for wiring path for bathroom bidet outlet
0
Is my analysis of a closet system (rails hanging from a top track) correct? (e.g. Elfa, IKEA Algot, or floating shelf on L brackets)