We recently acquired an antique dresser with a couple of broken hinges. We're hoping to be able to replace them, but can't figure out what they're called. We haven't been able to turn it up on google, and the guys at the local hardware store didn't know either.

The hinges allow a mirror to tilt forward and back between mounts on the two sides. There's not room for anything that sticks out very far, as in the examples here. A couple pictures of the busted hinges are below, plus our illustration of where they go on the dresser.

Looks like a mirror swivel movement or hinge but you have an inset one and not an outset one like this: 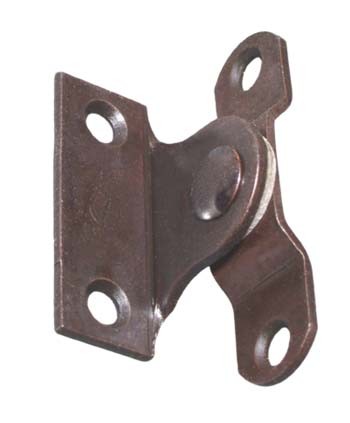 You might try sending a picture to these people and see if they can match it. http://www.blainewindow.com/index.php

This is a mirror pivot/Tilt Hinge.

Not the answer you're looking for? Browse other questions tagged hinges or ask your own question.

2
Need the name of a small pin used as a cheap door hinge
3
A hinge door stopper that won't break easily
1
How can I remove a MEPLA cabinet door hinge that has no exposed screws?
1
Bent Door Hinge & Partially Broken Frame
8
Is it true that one hinge bears most of the load on a typical 3-hinge door?
0
Is using a 4 inch - 5/8 hinge where a 4 inch 1/4 hinge used to go... doable?
1
What is the name of the hinge that pops out a few inches, then swings open
2
Cabinet hinge fastener