I'm not what you'd call a handy guy, and now wife wants me to put up curtains. This task is reduced primarily to getting a bit of metal stuck to the ceiling.

I bought screws and anchors. The anchors are a bit shorter than the screws. The clerk in the store told me that's normal. After some soul searching, I managed to drill the holes as deep as the screws. At first, I was worried that the holes were too big, since I can put the plastic anchors in with my finger.

When I try screwing in the screw, I'm physically unable to turn the screwdriver about halfway in (at this point I'm unable to yank it out of the hole either, so I'm assuming that the plastic bit expands on the inside). I don't have one of those screw-driving thingies, but I attached a screwdriver instead of the drillbit on the drill I used to make the hole, and it just "jumps out" every time I press the trigger.

I'm confused. The only possibilities that I can see are as follows:

Well, here are the culprits: 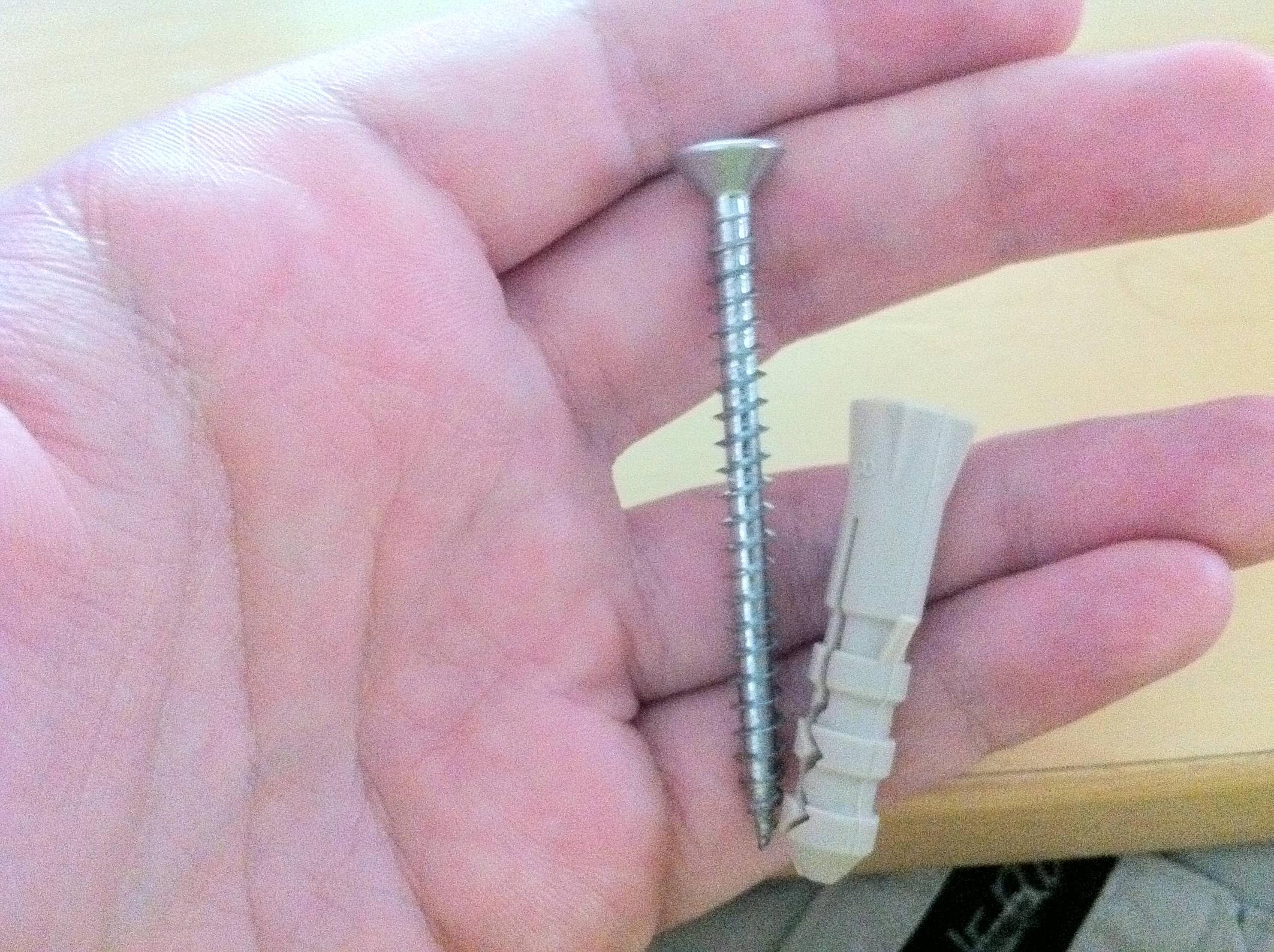 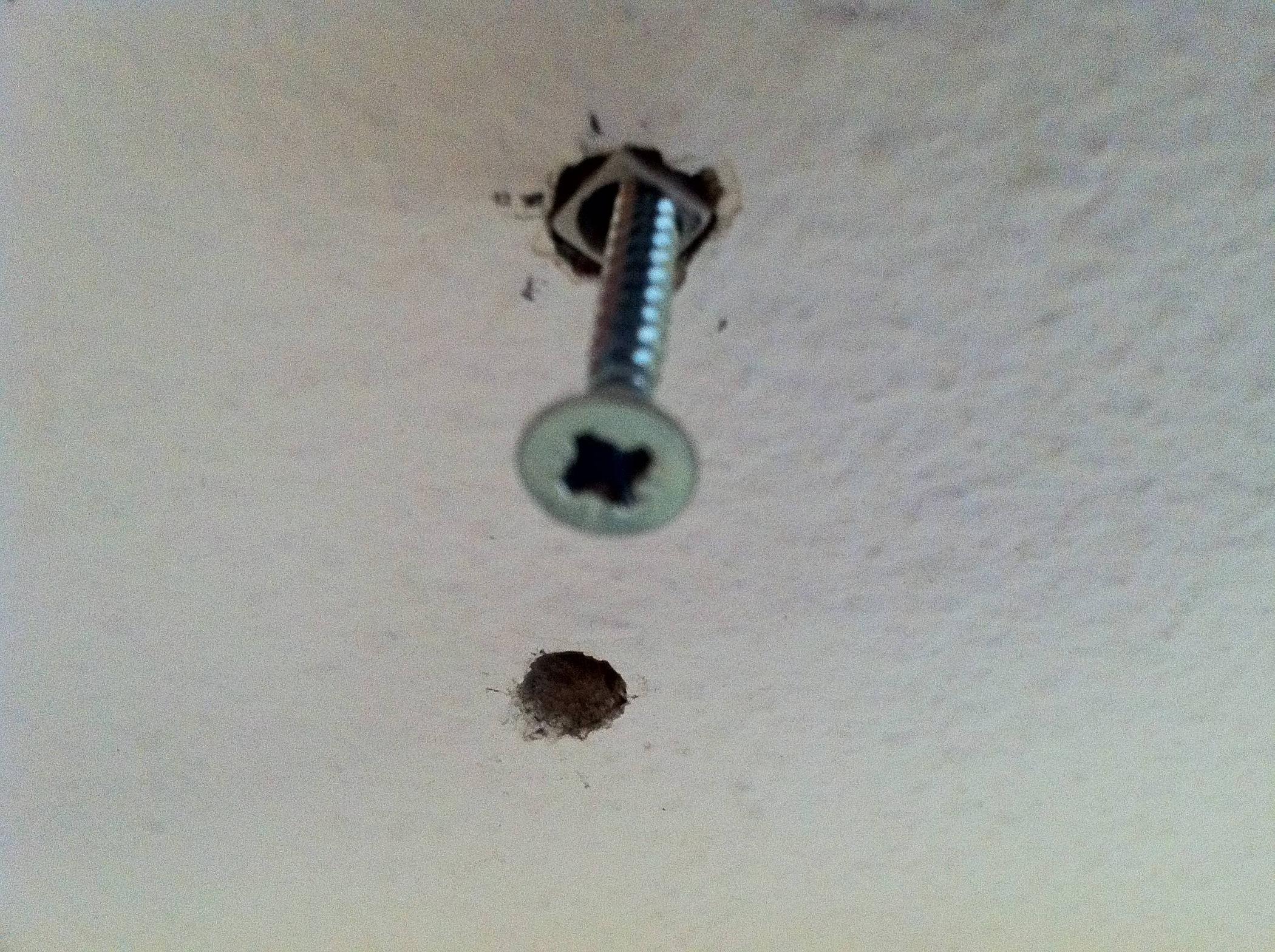 Oh, don't worry about the hole in the background. That one hit something shiny, so I abandoned it. Anyway, that's about as far as I can screw it the screw without losing my cool. Oh, it's my ceiling btw.

No, this isn't normal. Your anchors don't fit to your screws. What is happening is that the tip of the screw reached the concrete, and, of course, you can't force a screw into concrete - not even with a drill or a electric screwdriver, and certainly not by hand. 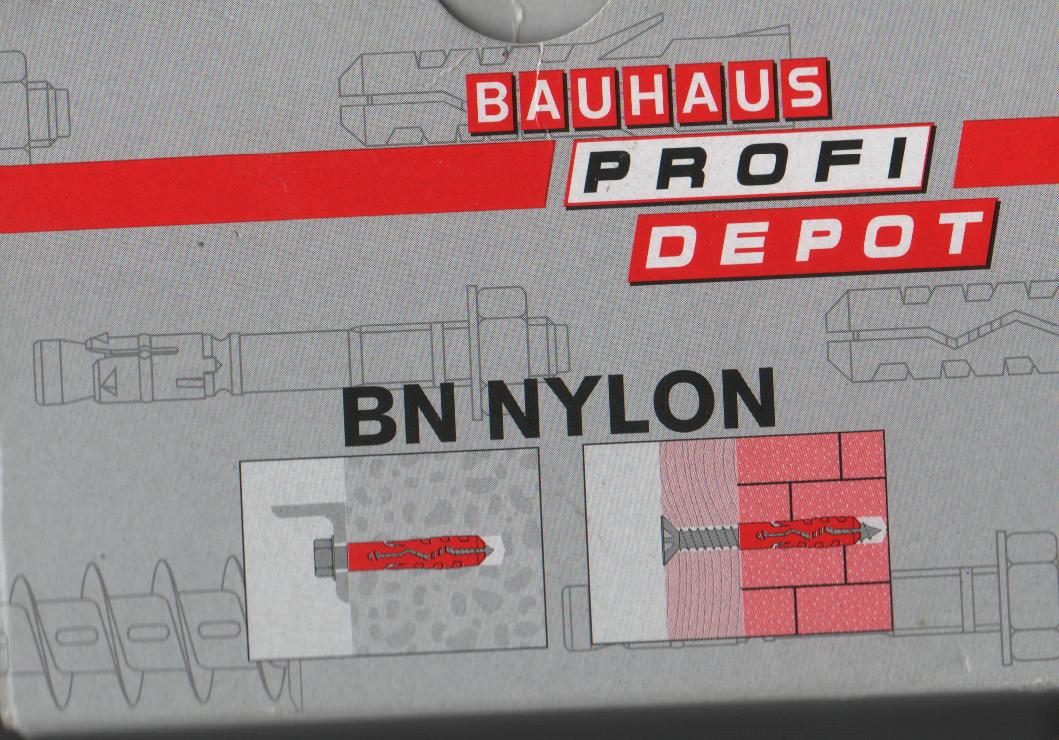 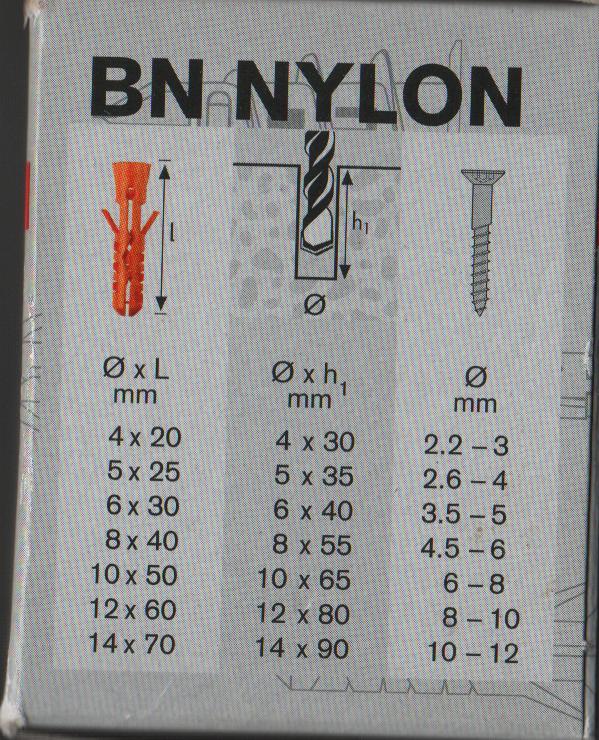 The table shows how to determine the correct hole depth. It also tells you what diameter of anchor and drill to choose for a given screw. As for the length of the screw, it is determined by the weight it will have to carry. Vertical screws are more problematic than screws in walls, because gravity is pulling in the direction of the hole, not at 90° to it. Light curtains will be OK with your size screw, but don't put any molton on them.

Answer is simple: the screw is too thick (and/or hole is too shallow), just get a 1/2mm thinner screw and all will go in (quite) well, You don't have to replace the plastic anchors. Also check the hole is at least as deep as the screw (if the screw has to be almost all inside the wall).

My suggestion is also to get a drill 'screw-driver' tip. It'll cost about 5€ in an average hardware store.

for larger holes there are options:

(1) use a small (long) drill and drill MANY holes in a circle and knock out with sledge when done. divide and conquer.

(3) use a less expensive pneumatic hammer (select cutter bit not hammer bit) or rent an (electric) jack hammer. these are slower than hole saws and difficult for larger diameters.

(4) examine hole saws. they have a castle top (like castle in chess). you can take a large deep socket and slot the top with a die grinder. drills don't have enough power but impact wrenches DO. drawback: limited socket radius and depth

Not the answer you're looking for? Browse other questions tagged concrete drill anchor or ask your own question.

4
I drilled holes in my brick too big for my anchors. How can I fix this?
9
Why can't I drive this Tapcon into concrete?
0
Holes in drywall slightly too wide for screws
6
Drilling 1/4" steel plate and concrete?
0
What are the best practice in drilling anchor screw holes in right locations?
0
Drilling into foundation form ties
1
How to keep plastic concrete screw anchors from spinning?
0
Anchors for concrete - what to use on a concrete ceiling?