can you glue tile to plywood?

I have a contractor who covered my bathroom with marble tile. Now tiles are cracking, grout is breaking and water leaking...

See image of a few he picked up that were making noise.

Also note he found water on the wood so now its drying.

My gut tells me this is all wrong. Can any pros weigh in on this? 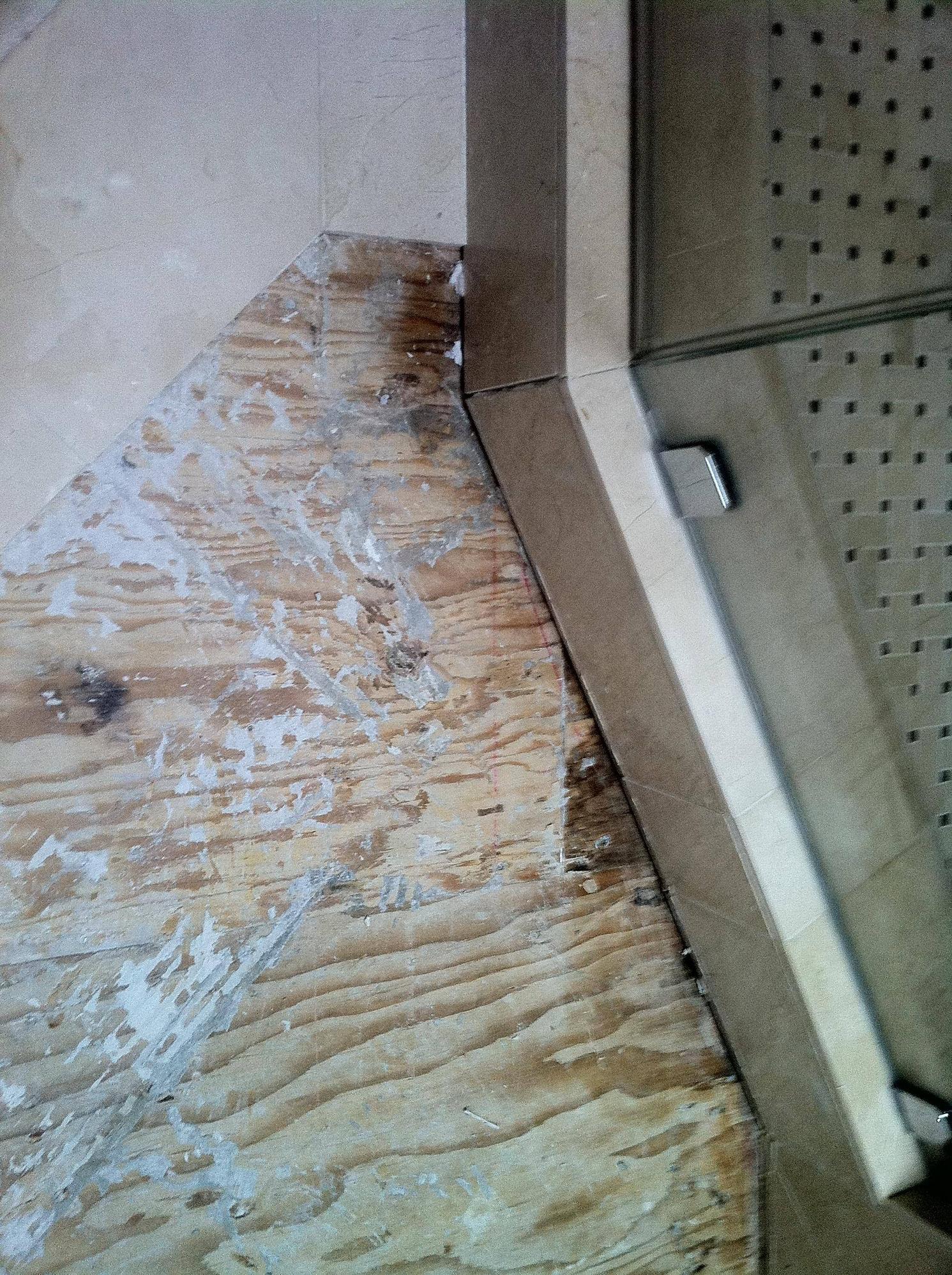 You CAN bond tile directly to a plywood subfloor and expect it to last. HOWEVER, the floor must be properly reinforced to minimize flexing; the joists, if they're 2x8 (newer code) and not 2x10 (older code), must be braced every four feet with cross-braces, which minimizes independent flexing of each joist and the subfloor above. Then, in either case the subfloor should probably be about an inch thick (at least 3/4"), and if that's accomplished with more than one layer of plywood/OSB, the subfloor should be glued and screwed together such that they're as close to one piece of material as possible. If you have the vertical space for a floating underlayment like Ditra, that will further reduce grout and tile cracking by allowing the two dissimilar materials (wood and tile) to swell and shrink at their own differing rates with temperature and humidity.

I would not "glue" stone or ceramic tiles in any case; the tiles will likely not be properly supported under their entire area and WILL crack and lift. Use thinset, and since this is a bathroom I would use a waterproof membrane laid down over a first layer of thinset to protect the subfloor, as neither thinset nor grout are waterproof. A waterproof underlayment is flat-out required on the floor and up the walls in shower stalls and anywhere else you expect to have water sprayed or standing on a regular basis; the water will wick into the thinset by the gallon, and eventually contact the drywall, where it will eventually degrade and mold even water-resistant "green board".

You would normally install backer board over the plywood before installing the tile. Backer board provides a firm non-flexing surface for the adhesive and tile.

Even before backer board was popular you would still not install tile directly on plywood. You'd typically put down a thick layer of mortar (a bed) to make a stable surface for the tile.

The Importance of Installing Cement Backer Board on a Wood Subfloor

Not the answer you're looking for? Browse other questions tagged tile tiling or ask your own question.

1
What type of tile should I install in a bath/shower surround?
4
Is there a way to remove the mildew smell from under tile without damaging the tile?
6
Should I redo my bathroom shower or try to waterproof it?
1
How to repair leak mould under bathroom floor tile?
7
What should be used between a concrete tub and wall tile?
1
Tile making clicking noise when stepped on and grout flaking away
0
Cracked subway tile on shower cub after remodel: what's my next steps
0
How to adhere edge of bullnose tile to drywall as trim for shower/tub surround
0
Rigidity (and height) of drywall around outlet hole