How can I vent a bathtub trap when the drain is routed under the tub?

I am … very slowly … thinking about replacing the probably circa 1950's galvanized steel drain pipes in my basement with PVC. In particular, I would like to replace the drain line under the bathtub since there is a drip there.

What I am not sure about is how to route things to correctly vent the new trap when I replace the current setup. I believe my easiest (and thus "best") option is to run a vent pipe straight up through the floor to an air admittance valve (AAV) placed (a lot) more than 6" above flood level for the tub. The most natural place to run this vent pipe would be the area just in front of the tub. The plumbing access for the tub is in this area. It is at the back of a closet and still mostly unfinished and thus accessible.

However, the fellow who self-built this house ran the existing tub drain in the exact opposite direction, directly under the back of the tub since this is the shortest path to the outlet to the septic.

From the look of things, venting was never a priority for him. I am guessing he assumed the tub trap was "close enough" to the vented septic outlet that a vent wasn't needed for the tub's trap. I am less trusting in the benevolence of Murphy.

My understanding is that the vent should be placed "behind" the trap and at least 2 drain pipe diameters distant. The vent access to get above the tub's flood level is in front of the tub, the opposite direction of where it seems the trap should go. I have attached the pics below to better illustrate what I'm talking about.

It's a mystery to me. 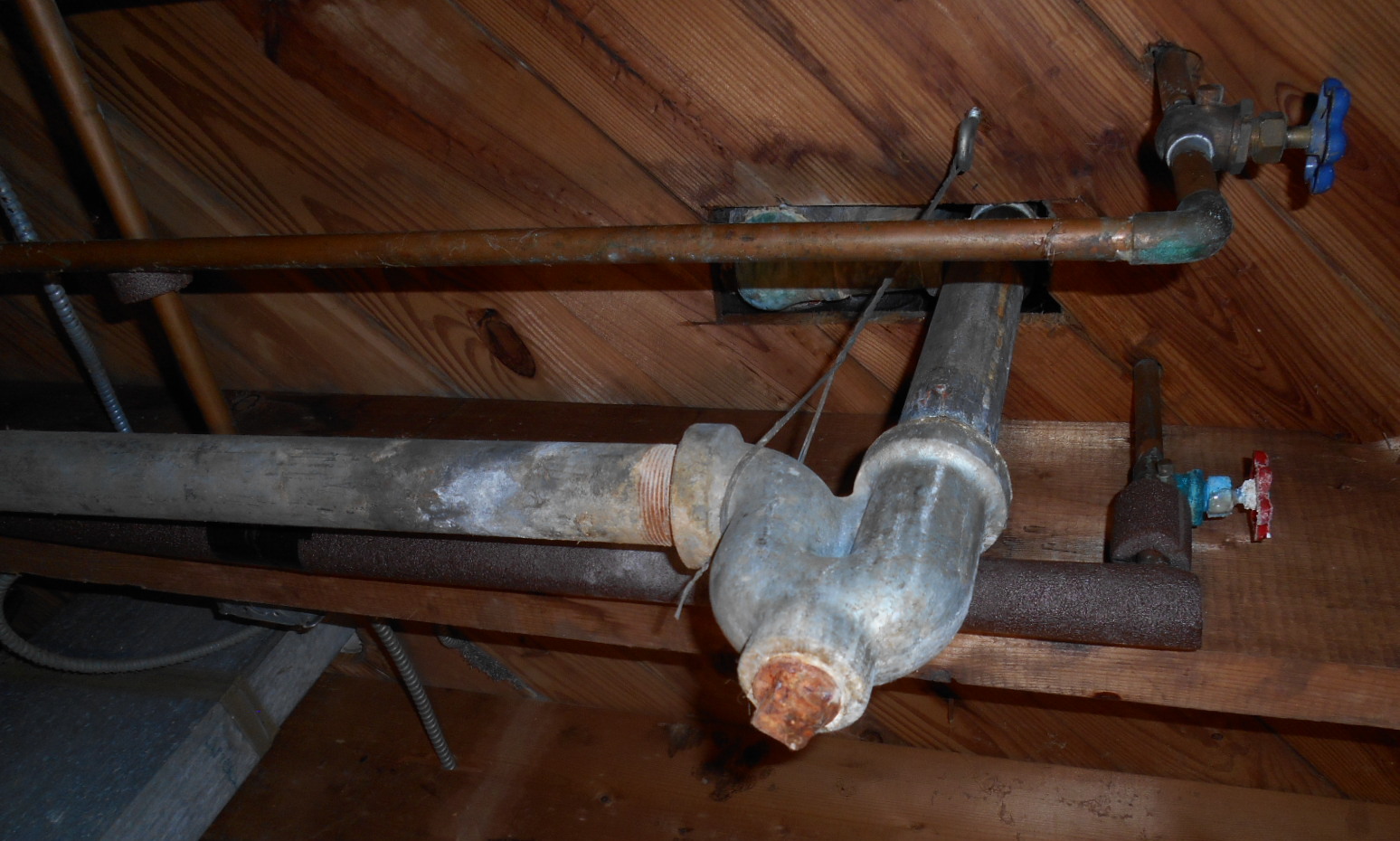 Just for the heck of it …

While the picture below doesn't directly apply to my question, I added it just for context. This pic shows the main outlet to the septic. Directly above it is the WC. The PVC angling up is the 2" vent stack through the roof. The combined bathtub and kitchen drains enter on the opposite side (behind in the pic) of the cast iron. The pipe with the black tape coming from the right is for the bathroom sink drain. The guy who put this together certainly did love him some right angles. <sigh /> 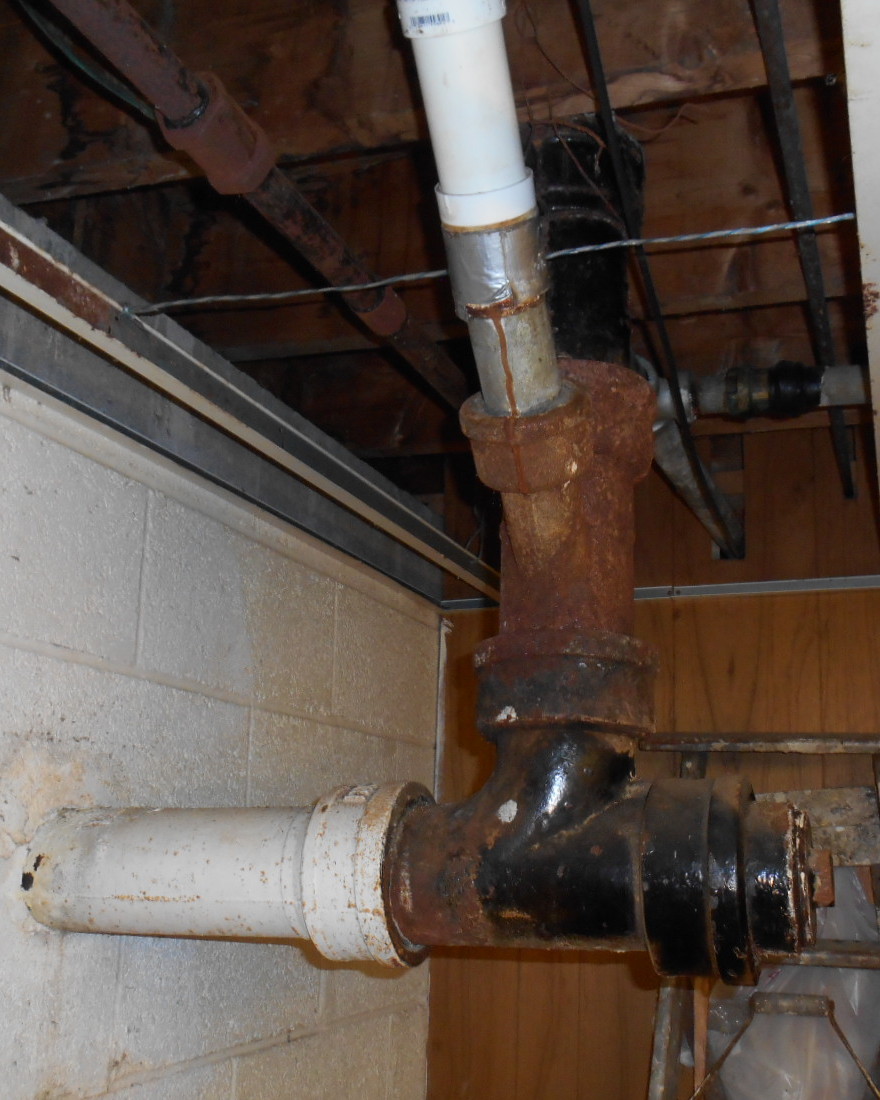 Why do you think the bathtub is not currently vented?

Not all traps need to be individually vented so you're not always going to see a vent if you don't know what to look for. It's a little hard to tell from your photos, but I think your bathtub is wet vented through the kitchen sink: 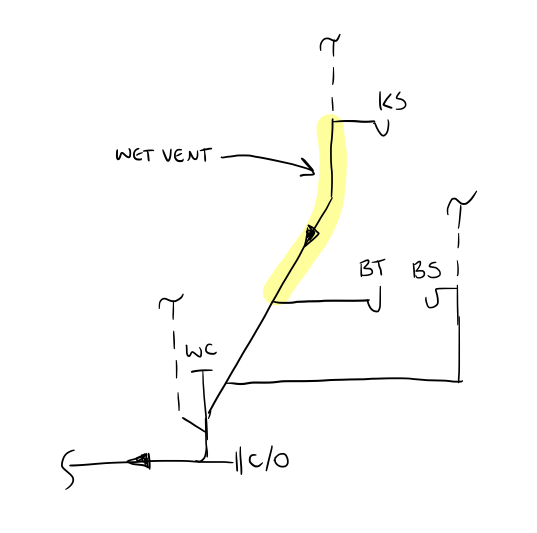 Please correct me if I've got the arraignment of your pipes wrong.

Is there no overflow on the tub? This picture shows the drain to p-trap plumbing but if there is an overflow then there is likely more pipe under the tub that you can't see and possibly this pipe is vented.

One way to tell might to take a look at the roof over your bathroom. If there is a vent penetration inline with the wall behind the shower drain then you can be pretty sure it is dry vented out that roof vent.

Both of your suggestions work however I think I would just run a T on the PVC coming down to the P trap and run my vent there it would work just fine. Believe me I'm not a plumbing guru but I do service calls for a living as a handyman and it run across a lot of plumbing experience now in situations like that you just have to do the best you can.

I learned the hard way, by repairing previous work here, that you can't have too many vents. Where to put them though? Your drop from the tub to the P doesn't have a lot of space. I can also appreciate not running horizontal below the "flood level." So, I'd look into what a vent is actually going to do. It's not going to help matters having it above the P (apologies if I'm misunderstanding where you wanted to put it) if the P gets clogged - if anything, water backing up will clog the vent and keep it from doing its job. I'd put the vent somewhere between the P and the main sewer drop, that would give me more flexibility to positioning, and adding whatever bends I need to route around the framing on its way up to the roof. And the T needn't be a horizontal exit - angle it up, that's what I'd do (if possible.)

I learned about the importance of venting when trying to figure out why the toilet in the previous owner's "new" master bedroom toilet would burp and gurgle whenever we ran the vanity sink in the hall bathroom. Apparently they never did. And that vanity sink? The reason I couldn't find where it emptied into the septic drain line, so I could add a vent pipe? is because they T'd it into the vent between the hall toilet and master bedroom toilet. (saving even worse horror stories for other questions.)

Not the answer you're looking for? Browse other questions tagged plumbing bathroom drain bathtub drain-waste-vent or ask your own question.

10
Can a plumbing vent go up and then back down to the connection with the vent stack?
3
Proper size drain and venting behind new bathtub
3
How to drain a free standing bathtub
3
Can I tie a vanity sink drain into the bathtub drain?
1
Should my bathroom's plumbing vent be downstream of the toilet connection?
3
Can (must) P-trap be directly underneath the drain in stand-up shower stall?
0
Can Air Admittance Valve under bathroom sink fix bathtub drain overflow?