I have two roof drains, can I seal one of them?

My house has a flat roof and leaks, mostly directly underneath the drains.

I've had problems with leaking around the drains since I've owned the house, mostly dripping, but over time it's turned into gallons of water.

Last year I installed a foam membrane which is basically indestructible and totally leak-proof, but I'm still leaking. (the new roof stopped an unrelated leak in a different part of the house).

I think I've narrowed the leak down to the drain in the upper left of the picture. I think the leak is below the roof membrane, but above the roof decking (it's very hard to tell). The drain has a small bit of chicken wire rolled up in it to keep out debris. 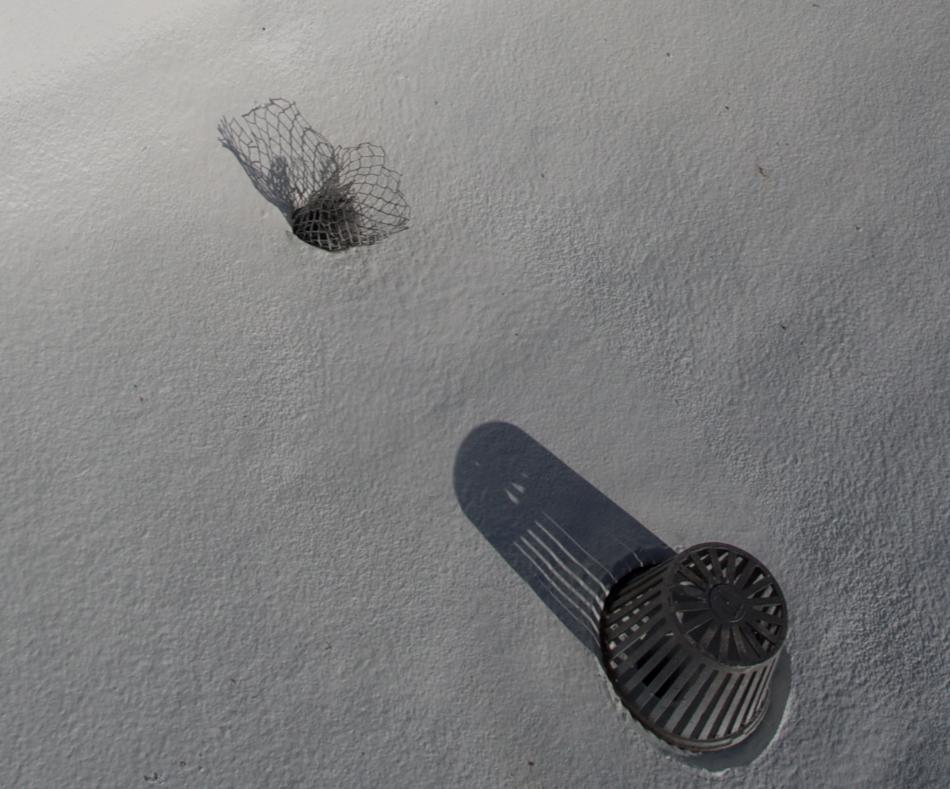 My question is, why do I have two drains so close to each other (they're about 18 inches apart), and is there a reason that I couldn't just seal off the one that I think is leaking? Both drains appear to drain into different pipes, one of which (upper left) has a toilet pipe connected to it in the basement.

The house was built in 1928. Based on the technology level of the drain on the lower-right, I presume it was installed sometime after the house was built (?), or at least someone upgraded it, without upgrading the other one.

You have a redundant roof drain. If one of them were to fail (clog) the other would (hopefully) continue to allow water to drain from the roof. If you were to cap one of them And the only drain were to become clogged water would accumulate on your roof to possibly it failed (or found a new route to the inside).

as for it leaking: it would be easiest to open an access to the drain piping inside the roof. Start were you said the water is wetting the ceiling and cut out a opening (14x14) to allow you to inspect and/or repair the pipe. The pipe, if it is original from the 1930's (geez, hmm) I believe would be 2-4" threaded galvanized? Maybe 2" cast? It may even be large diameter copper pipe. What ever the pipe material replace any rotted or rusted sections with ABS of comparable diameter. Join the new to old with rubber repair sleeves that tighten with hose clamps.

Not the answer you're looking for? Browse other questions tagged leak roof or ask your own question.

4
What's a good way to seal a flat concrete roof?
6
How do I find the source of the water leaking through the ceiling?
1
How can I find the source of a leak?
2
How to stop a leak of water through a concrete floor
2
How do I set up drains for a flat roof?
0
Concerns about cutting into roof for attic access?
0
How can I temporarily remedy the rotten, leaky roof on a mobile home?
3
Is sealing a leak from the inside of my roof a bad idea?
0
Can I use mylar sheets to keep my roof cool?
0
Possible water in wall from a roof leak