How to make water move in a square bed

Say I have something similar to the image below: 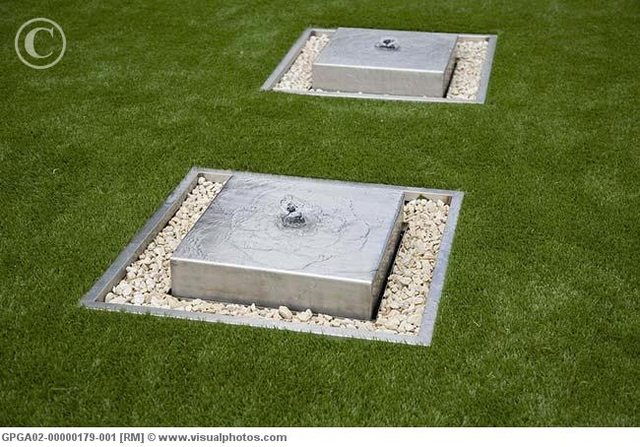 Now, where you see the rocks, I want to put water that goes a little higher than the rocks, and I want the water to move in one direction all around the square. Rather than being made from steel, it will be made out of wood sides and it will be raised off the ground a little. So, how would I make the water move? Some kind of pump? Can I keep each side level or do I have to angle some sides so that water can flow?

This is an interesting question. Actually, you can have a squared waterfall with the top trim being all the same height, however, the bottom has to be an incline leading to a sump pit where you can install a small water feature submerged pump. I'm not much at drawing pics, maybe one of my fellow SE buddies can help me out here. Let me try to explain the theory. Even though you want the shape to be square, think of it as a straight sluice. You will have a pump at the lowest point, and recycle the water to the highest, starting point. So if you build a square canal, there must be a start and an end. The barrier between the "start" and "end" could be very thin, maybe a piece of plexiglass. The difference in height between the start and end does not have to be much, but practically speaking would depend on the dimension of the overall square. So if the start of the flume was 6 inches deep(for example). then the end of the flume/ pump location, could be 12 inches. Since water is going to seek it's own level, the volume of water in the feature has to be a bit less than is required to fill the entire feature to the top. So let's see how it works: Water from the lowest point/pit or reservoir is pumped up over a barrier to a shallower starting point, raising the surface level at the "starting point. Gravity and the flow created from the pump, sends the water downhill along the sluice. As the water seeks a level state, it flows back to the pit/reservoir where the pump lifts it to continue the cycle.

With some modifications to the requirements, I'd do something like this: 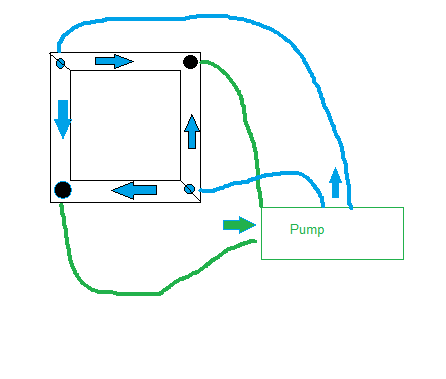 The blue circles are the water supply, and the Black/Green are the drains. The diagonal black lines could be clear plastic, and nearly invisible.

A relatively simple option is to put a pump inside the wooden square, then dig a small intake tube into one side of the square (coming in from underneath, at an angle towards the ground) and an outtake in the opposite direction. I will add a sketch if it will not prove too difficult to make...

Not the answer you're looking for? Browse other questions tagged water or ask your own question.

0
How would I start to repair this Shurflo 2901-0213 water pump?
2
What pumps necessary for this proposed well water plan?
0
Automatic turn off of water pump as water tank overflows (Manual turn on is needed)
2
Water radiator system has single loop instead of flow & return pipes — does this make sense?
0
Where to install a water conditioner?
1
Will replacing my jet pump with one that has a higher shut-off pressure increase the discharge pressure?
1
Do nice water pump pressure switches exist?
0
Does a new water tank need to be installed at the same height as an existing one for the floats to work properly?