Can a fig tree be damaging the foundations of a neighboring building?

We have several fig trees growing very close to a number of small buildings.

Recently it came to light that one of those trees' roots has entered a massive underground cistern that we use to store rainwater: there are dozens of tiny roots growing inside the tank along a seam (not a crack) in the concrete, apparently that was the weakness they used to get through.

We've been advised to fell the fig tree to prevent further damage to the tank, and possibly even all the others to prevent damage to buildings. We're not keen on doing that at all - we treasure the trees, which are all more than thirty years old. 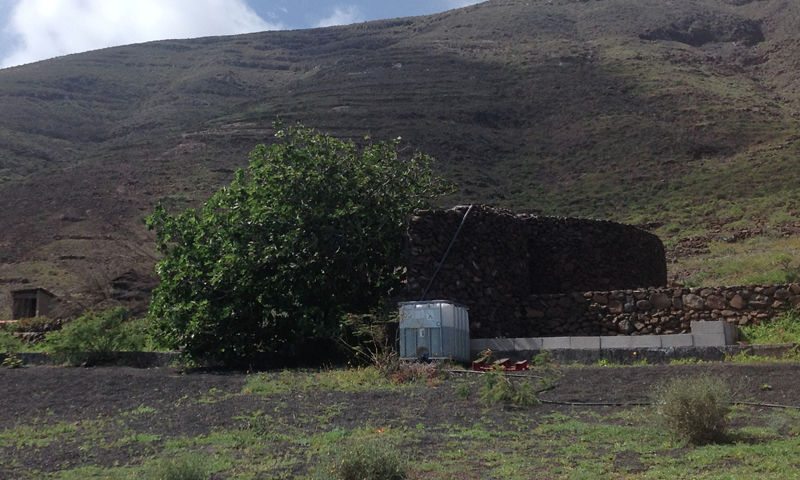 We can risk the water tank's wellbeing, it is used only for garden irrigation.

What we can't afford, however, is structural damage to the buildings. There's a number of mysterious cracks in walls that could just be the earth moving (we're on the foot of a mountain) but we're of course worried now that it's the trees' roots causing the damage.

If this could be the case - is there anything that can be done about it, short of felling the tree?

It is probably worth noting we live in an arid desert area with little natural irrigation.

In my experience tree roots have damaged foundations. The roots penetrate the smallest cracks and if they don't open it up wider, it still allows more water to enter than what the foundation should be designed to keep out.

When roots grow, and they will the displace dirt, and the dirt will go somewhere. At times it is the wall that give under the pressure.

You could root prune the tree by digging a trench, if there is room, cut back the roots, water proof the wall and fill the trench again.

I have never heard of the fig roots damaging a structure. But if the roots are coming inside then it may be case that termites come in through roots or other side effects from having roots under the house.

Not the answer you're looking for? Browse other questions tagged water foundation or ask your own question.