How to repair leak mould under bathroom floor tile?

The attached picture is a bathroom floor. The tile worked loose and on lifting it I found extensive black mould under it (killed and cleaned off it before the picture was taken with a mould killer product). The surface under the tiles looks like a thin layer of plywood. The very dark coloured patches in the picture have completely disintegrated to a rotten mush and have clearly been wet for a significant period of time.

To the right of the picture is a shower cubicle which previously leaked (small sealant failure AND a small grout crack) - these leaks have both been fixed. It is likely the source of new moisture has now been stopped.

I believe what has happened is the shower leaked under the tiles, and over time the boarding has rotted in some small places, which has allowed tile movement that has then led to grout failure and a loose tile. It's only at that point I found the mould.

As I see it I have three options:

The room is on the upper floor of a house (1st floor to us Brits, 2nd floor to my American friends). The floor construction is wooden timbers (likely immediately under the sheet boarding that has rotten) which are left-to-right in the picture, so would probably support movement of water to the affected location. The bathroom is fairly well ventilated with a constantly running humidity sensing fan.

What would you do? 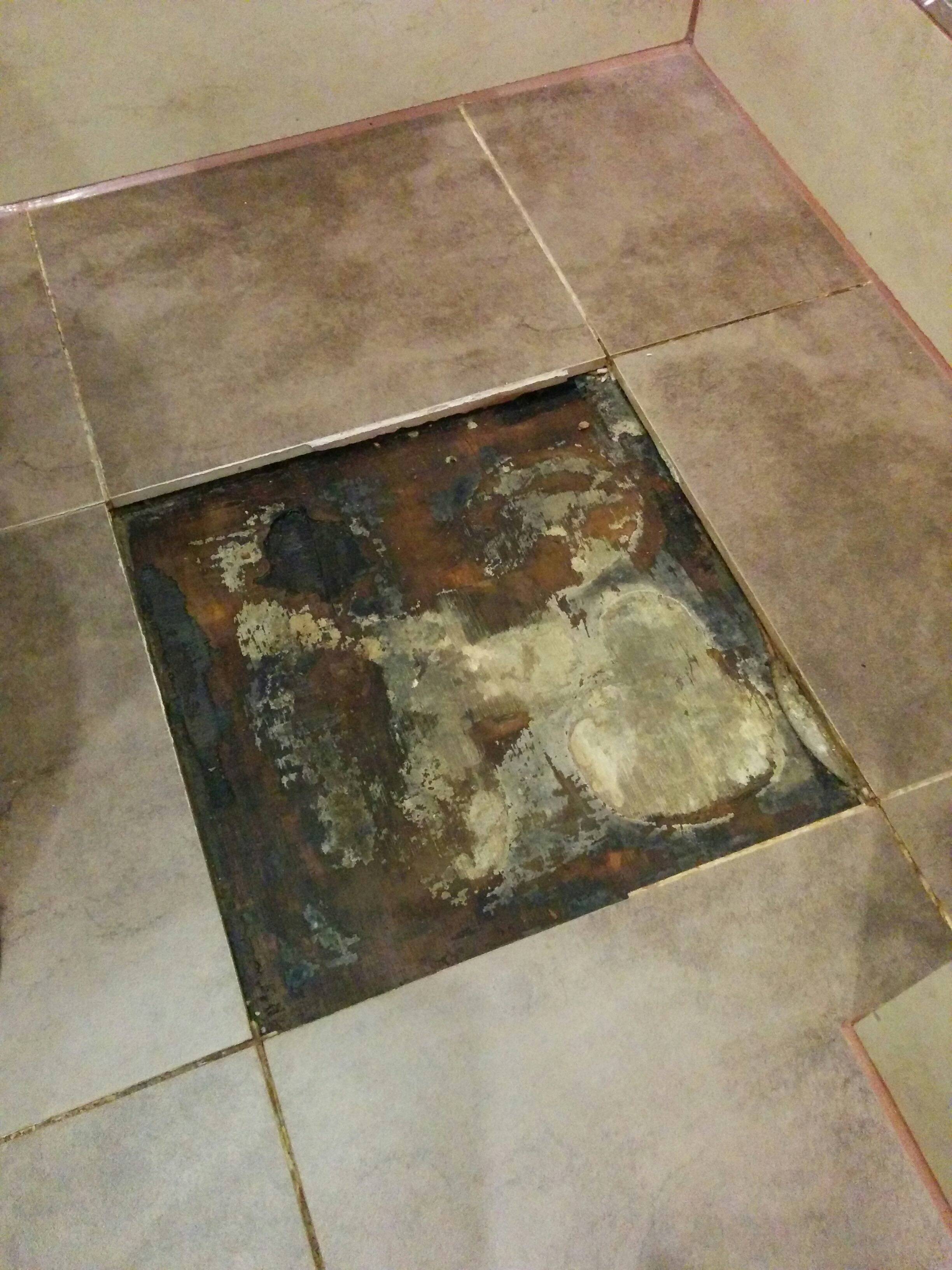 Sorry to say this, but number 3 really is your only option. First the reasons why:

A few things to keep in mind: You cannot with 100% certainty identify what type of mould it is just by looking at it. It might be worth your time to have a sample tested. The mitigation methods for certain types of mould are much more stringent. However, you could just assume it's the worst case and mitigate it that way. In any case, you're going to want to have your house tested once all mould is removed and BEFORE putting new coverings or sub-floor back in. That's just one of the steps. Do some research on how to mitigate. It's not a simple process and it's not to be taken lightly.

Potential health problems from mould exposure can be much worse than many other things including asbestos. You'll want to do some research on how to mitigate this. Things like respirators are an absolute must regardless of the type of mould and full hazmat gear may be required recommended. You'll likely need to seal off the location and provide negative air flow to the outside. You'll likely need some air-scrubbing filters.

Sorry for the bad news, but mould is bad business. It's very likely already causing health issues that you may / may not be aware of as yet especially now that you've tried to surface-clean your sub-floor and stir up the spores. Regardless of whatever product you're using advertises, they don't always work. Do your research with this one, don't just buy a product / clean it and hope it's good to go.

3
Gap in sealant round edge of bath, mould underneath, what to replace with
5
Will this floor tile break?
5
What should be done about water under bathroom floor tiles?
3
How can I fix my leaking shower?
2
Would retiling a shower with larger tiles mitigate mould growth on the grout?
1
Messy tile/wood floor transition (PICTURES)
1
Tile basement bathroom over cracks without Ditra
4
Sanded Grout in Stone Tile Floor Keeps Disintegrating
0
Floating floor tile (Snapstone). Can unlevel be fixed?
2
Should I tile under bathroom door?