Why am I not getting enough gas pressure for a BBQ and generator?

The house we bought in Nov 2014 was plumbed in for LP gas. There is a 500 gal tank outside with a regulator connected to a 1" supply to the house. Once at the house there looks like what would be another regulator the in-ground pipe connects to, just before it enters the house. In the crawlspace the piping is done with the Corrugated Stainless Steel Tubing (CSST) The 1" line in the crawlspace is branched off with 3/4" lines that feed to a fireplace on the first floor, but is capped off. It feeds the Rinnai Tankless heater on another 3/4" branch. Another two 3/4" branches feed the oven and a gas fireplace on the second floor. The last one, also 3/4" is brought up into the outside wall and turned out to supply, at the time, a future BBQ grill, or so I presumed.

Any ways, I set out to complete the hook up. There is the typical red handled valve on the end of the line on the outside of the wall. It is fitted with 1/2" IPS threads to fit it to the CSST in the wall with the proper adaptors I also presume. It was capped with a plug which I removed, brushed out the dried pipe dope and fastened a Flame King connector with Teflon tape on the treads. 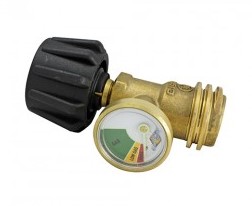 Before I did the install, I removed the connector with the black hand nut and set it aside for use on the generator. That left the remaining part, after it was installed on the line, for the part that goes to the LP tank on the BBQ to hook right up to the in-house propane, which I did.

When I turned on the red handled valve that charged the line to the newly installed connector to the BBQ, I did not see the indicator gauge move a speck. I did hear the regulator on the BBQ make the soft click when the line is pressurized, so I turned on a burner, which did fire up. Turning on the other 3 burners reduced the flame on the first one as each one turned on. Just as a mention, the one burner, while it was the only one on, did not seem all that spectacular, even less so with the other burners working. The needle on the gauge has still not budged, still below the empty mark.

So I moved onto the generator I wanted to adapt to this too. I took off the old school connector and installed the new part with the black nut with the Teflon tape. The install was a snap. Brought the generator over to the outside connector that I just tried the BBQ on and tightened the connector. I did test ALL connections/threads with soapy water in a spray bottle. No leaks anywhere. I attempted to start the generator, a Honda 6500 watt twin cylinder 17 hp motor converted to run on LP gas, that ran great on the little tank I had. It would only fire intermittently when I had the choke out. As a note the BBQ and generator, also have regulators too.

I know I am not getting enough propane to the engine, and perhaps the BBQ when it is hooked up. With everything else working fine in the house, what is the issue with the 2 items I am trying to hook up? Are all the regulators choking the flow? I figure the gauge would show something after it had a chance to build up, but there is nothing. Still showing below empty. I am going to guess the gauge only shows pressure on the non regulated side, so it is moot to even have it, but I could not find one without it, oh well. To reaffirm the question, why am I not getting enough pressure through? My gas oven, or at least ones I helped install on jobsites have there own regulators too, but the ovens and cooktops worked fine.....

Here is what I found out after going after a number of potential answers and still not enough propane being delivered to the generator or the BBQ for that matter. What the trouble was is the house propane is already regulated down to the standard 11" WC. I was trying to run the generator with the house pressure and yet still another regulator that allowed 11" WC too. These regulators are the ones which came with the generator and BBQ. One was more or less working against the other, constricting what either the generator or BBQ needed to run on.

I visited the propane dealer to confirm what I found online, the tech confirmed all my findings. I also bought 2-12' hoses with quick connects included. I was able to take off the short hoses, add the new ones and since I only needed 1 quick connect for the house to hook up either of the lines from the BBQ or generator, that left me with a spare connector to add to the old short line so I could still use a small portable propane tank if I needed to.

Make sure the output on your regulator is set correctly -- probably about 10" WC.

7
How do I pressure test a natural gas line and what do the valve pressure ratings mean?
2
Do I need to 'burn out' the LP in the gas lines prior to swapping out an appliance?
3
How can I be sure there are no gas leaks around Gas Oven/Range Combo?
2
Is it safe to run a propane appliance from a portable propane cylinder?
1
BBQ: Add Propane Connection with Y Connector
0
Hot water heater and gas-stove not working at the same time
1
Two Stage Propane Regulator with Splitter
1
How do I add a level gauge for 100 lb propane tank?