Is it possible to notch framing studs for installing conduit w/out structure collapsing?

I have a garage which is a simple structure - 4 walls, garage door, and a normal door. The structure is framed as one would expect, studs 16 inches apart. I want to put some extra wood paneling as an inside wall in order to make it look nicer, however I see that on one wall, I have a long electrical conduit (EMT) running half the length of the wall that I would have to move. The conduit is attached on the outside of the studs (interior to the garage space itself).

My question is, since these studs all together bear the weight of the roof, is it okay to cut a half inch notch to run conduit? I don't have much experience with this and I just want to make sure I won't weaken the structure so that it collapses. I live in Chicago so I have strong winds.

Also, you cannot notch the side of the studs that structural sheathing/plywood is affixed to (see shear walls).

R602.6 Drilling and notching - studs. Any stud in an exterior wall or bearing partition may be cut or notched to a depth not exceeding 25 percent of its width. Studs in nonbearing partitions may be notched to a depth not to exceed 40 percent of a single stud width. Any stud may be bored or drilled, provided that the diameter of the resulting hole is no greater than 40 percent of the stud width, the edge of the hole is no closer than 5/8 inch (15.9 mm) to the edge of the stud, and the hole is not located in the same section as a cut or notch. See Figures R602.6(1) and R602.6(2).

Exception: When the entire side of the wall with the notch or cut is covered by wood structural panel sheathing

Is this EMT (metal conduit)? I would consider putting protective metal nail plates over the notches, as well. If it isn't metal conduit, I'm pretty sure you have to use those plates. 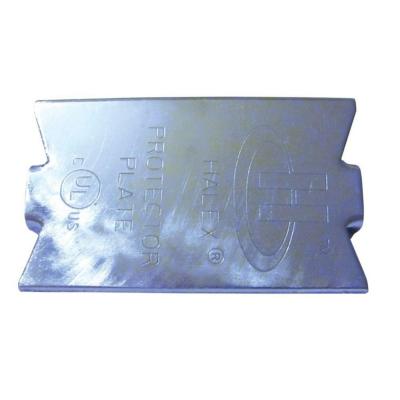 11
Is there a limit to the number of holes bored in a joist?
1
Running LV conduit through attic - what do I need to know?

3
Are cripple studs necessary for framing a door in a "decorative wall"
6
How much temporary bracing do you need when cutting a new exterior door opening in an existing house?
3
I can't notch king studs to fit an electrical box, right?
1
Can I drill or notch a 2x2 bottom plate in a flat-stud wall?
2
Going from conduit to NM in new framed wall (commercial)
4
Can I replace a window in a garage gable wall without adding a modern header?
3
Can PVC conduit be run through garage/house firewall?
1
16" on center framing spacing corner - optimize for butt- vs by- wall, interior vs exterior panels?
1
Reason for two studs next to each other inside wall? Safe to drill through?