Remounting an undermount sink in a manufactured stone benchtop

The undermount sink in our recently purchased house has started to pull down from the benchtop, so there is a ~5mm gap and the seal has broken. It's only pulled away from one side but I don't think it will last much longer. It is a manufactured stone benchtop so I'm not sure of the best way to repair it. It seems to have been originally fixed with some kind of thick creamy brown glue that feels soft with some give. Judging by the way the glue has dried with drips running down it was mounted with the bench already in place.

What is the best way to remount the sink? Preferably without removing the entire benchtop first :-)!

Under back of sink: 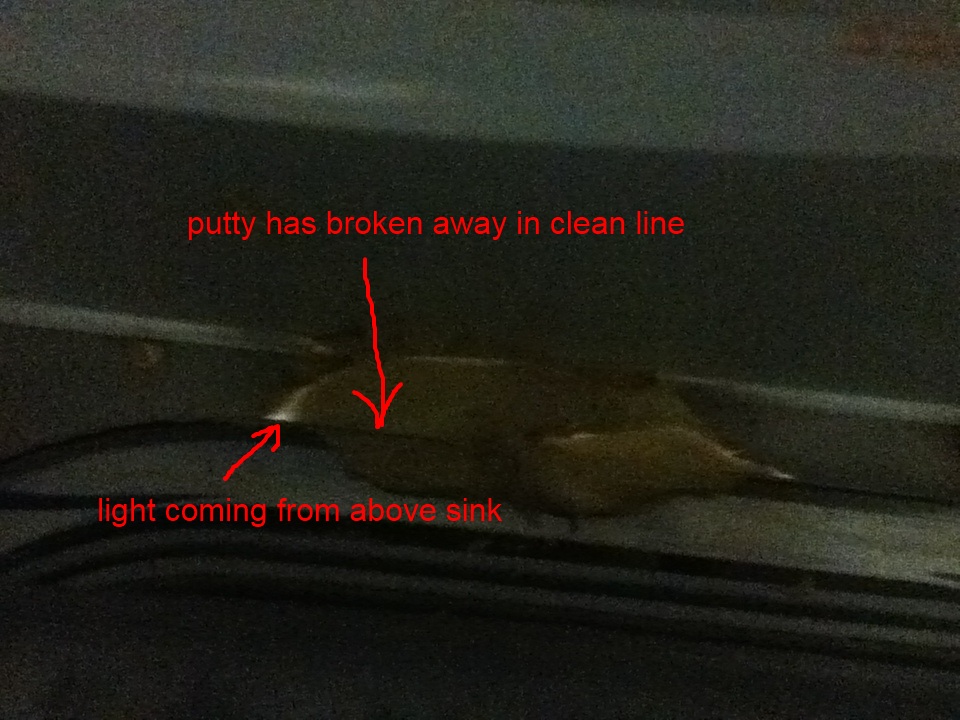 Under front. It hasn't pulled away from here:

Back of sink again. This blob didn't even seem to get put on the sink:

An undermount sink needs to be mechanically supported from below, with brackets or some kind of structure that can physically support the weight of sink. Between the water, dishes, maybe even someone leaning on the sink, and the sink itself, we are talking about a load on the order of 100 pounds or more. So definitely far in excess of what an adhesive can support in this layout. In the absence of proper support, the weight of the sink may be resting on your drain pipes, which they are not designed to support. You need to get and install a mechanical support, either brackets (the sink's manufacturer probably makes or recommends some) or a custom-built wood structure to carry its weight. While you're at it, make sure to reseal the edges using a consistent layer of putty or silicone caulk.

Not the answer you're looking for? Browse other questions tagged repair kitchens sink or ask your own question.

11
What is a good way to cat-proof (or child-proof) kitchen cabinets?
8
How do we convert our drop-in sink to an undermount one?
5
Should second trap under kitchen sink S-trap be there?
1
Can we use an under mount sink as a drop in?
4
How can I stop kitchen sink caulking from peeling off after a few weeks?
3
How do you access under a front loading washing machine drum to remove a trapped coin?
3
Why am I failing to connect this simple kitchen sink pipe?
0
Repair the overflow drain under a Corian sink where the tube and box has come unglued
0
How to cut away ceramic from a sink that doesn't fit
0
How to fix kitchen sink faucet?