How to fix a threaded toilet shutoff valve?

This valve is leaking from the area shown.

I tried unscrewing the valve but it wouldn't budge. The pipe it's connected to is 60 years old, so I need to be gentle. What's the safest way to take it off?

Option B is to change the stem. Most valves I've seen have a single nut that holds the stem in, but this one has two. Tightening the second nut shown by the arrow eliminated the leak but then the handle won't turn at all.

Which stem do I need to replace the one I have? 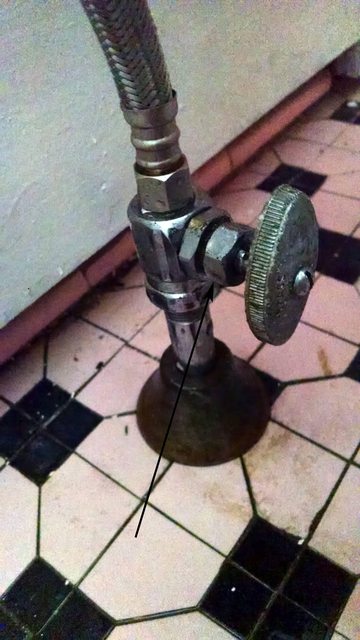 Looks like it says "BRASS" on it, I'd guess American Brass. Identify your stem, here.

It may not leak anymore if you have tightened it, but now you need to loosen it a little to let it operate. I appreciate your need to be gentile, but I'd swap the entire valve out. One thing though, is that nipple NPT? It kinda looks like machine thread.

Safest way to take it off is to 'back-it-up' by using a pipe wrench on the nipple and an adjustable wrench on the valve. If you collapse the nipple with a pipe wench, it was about time to swap it all out anyway.

Backing it up, keeps the tension between the nipple and the valve, and doesn't let the rest of the piping spin.

Don't care, just want it to work and not leak: lock it down in the 'on' position.

Small leaks plug themselves. Relieve some of the tension on the packing nut, put a pan under it and see if it stops in a few days.

Not the answer you're looking for? Browse other questions tagged plumbing toilet valve or ask your own question.