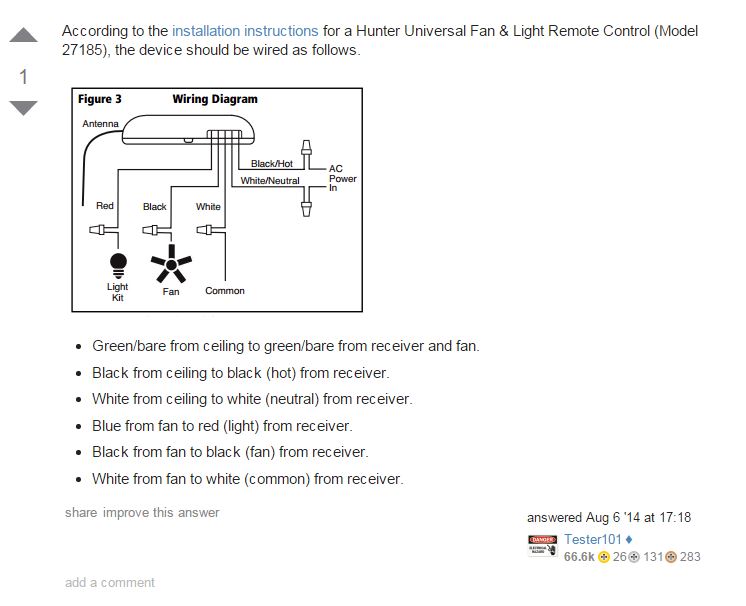 It sounds like you are converting from a fan that did not have a remote control to one that does.

In many older fan/light setups, power came to the wall switch with just two wires, hot (black) and neutral (white). There usually was also a ground wire, most commonly bare, but sometimes green. In many cases the incoming hot line was connected to two switches, one to control the fan and one to control the lights. The cable from the switches to the ceiling usually had three wires (plus a ground). The neutral wire was for both the fan and light, but the hot lines were separate. They are most often black and red. There is no firm rule as to which goes to which.

In modern fans with remote controls, the whole fan/light assembly is often set up with no wall switch. In those cases, you follow the diagram in your question using just a black (hot) and a white (neutral), plus a ground going to the remote controller in the fan unit itself. On, off, and level control for the fan and light are all controlled from the remote. If you want this setup, you can remove the switches, and in the box that held the switches, connect the black wire bringing power to the switch directly to the black wire going to the ceiling fan unit. Leave the red wire that was attached to the second switch unconnected, cap it with a wire nut, and put a blank cover over the old switch box.

You can also leave a wall switch in the mix. In that case, the wall switch is a master - when it is off, everything is off. When it is on, you then can control the various features with the remote, even turning everything off. But you only need one switch. Either remove the second switch and use a cover plate that has one side blank, or leave the second switch unconnected but in there filling the hole.

If you plan to use the remote, you can skip the red wire in the ceiling, just cap it off with a wire nut. If you want direct control of the light and fan from the wall switches, you can usually skip the controller unit in the fan unit, but you lose control of speed and light level.

1
How do I install a ceiling fan remote?