Can I demo plaster walls but somehow keep the window casing?

My house was built in 1915. It has cracked (original?) plaster over lathe, poor insulation, leaded paint, and knob and tube wiring. To fix all of these things, I'm demo'ing the upstairs down to studs. The ceilings too. (I'm leaving the exterior siding and existing roof) After updating the wiring and insulation I'll put in new drywall.

This is the first time I've taken out lathe and plaster. The plaster doesn't have asbestos but the paint does contain lead. I'm doing the full abatement: respirator, taped plastic barriers, hepa filters, etc. I'm doing it myself, and it sure is messy :)

As part of this project I'll replace the old windows. They're double-hung, single-pane, painted shut, weights removed, with some cracked glass. 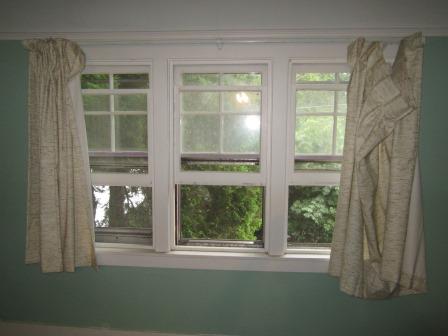 I want to keep the existing look of the windows. It was recommended that I use window inserts instead of new construction flanged windows, although I've never done this. I'd paint over the existing leaded paint on the window trim.

However, all of the trim is put over the top of the plaster. The lathe and plaster add up to around 1/2", but it's very irregular. It seems to vary +/- 3/16". So if I dig the plaster out from behind the trim, I'm left with this varying gap between the trim and the framing.

Finally to my question. How is this done? I have a few ideas, but I'm hoping you can suggest better ones! Or tell me I'm on the right track. Or, tell me to suck up and simply replace the whole thing...

Any suggestions? Thanks for any advice.

One of the main purposes of moldings, such as the trim around doors and windows (called casings), is to act as a barrier and seal to wind and water intrusion. Moldings on wall between vertical boards, called battens served a similar purpose. The decorative element was an extra benefit (unless you are an extreme modernist/minimalist who wants totally flat featureless transitions).

Since the days of rough hewn houses, our water and wind protection has improved overall. However casing still are a significant protector, especially against air leaks in cold climates.

Casings provide the protection in two ways - they create a convoluted path for any air to get through by overlapping both the door frame (jamb) and the wall material (plaster, wallboard, paneling, etc); and they they fit tightly and are generally sealed to the other two parts with paint and often with caulk.

Your first approach will compromise both of those features. Your are effectively creating a butt joint with no overlap. The path for air is directly perpendicular to the wall and the casing. The joint will likely crack at some point, even if you mud or caulk. Those seals work well when they are used in a corner that meets at a right angle, with one member going behind the other, not a butt joint. If you add an additional molding, you still have a butt joint along the edge of the original casing that might crack, and you are complicating your profile.

The second approach solves that problem, but getting the old plaster and lath out, and getting a tight fit pushing forward against the in-place casing will be hard.

The third approach seems much harder, but actually may be easier and less time consuming than the first or the second. Once the casings are off, removing the plaster remnants will be much easier. If you carefully score the joints around the casings and where they meet at the top with a utility knife, pry them off using a small catspaw type prybar, pull the nails through the back of the casing, lightly sand the chipped paint off the edges before reattaching, it should be quite manageable. It sounds harder than it is.

Even if you were to crack a molding or two in the process, they can be glued back together, and once painted, will seem whole.

P.S. My house was built in 1869, renovated in 1905, and renovated again in 1999. In the last reno, the above process is exactly what was done, leaving great early 20th century details, smooth walls and tight seams.

We are doing mostly option 3 right now in our house, but in our case, we are pulling the trim down to strip the paint on the trim, and clean up the walls. (100 years of paint, varnish and some neglect). It's not terrible to pull the trim, and I think it will make the rest of the job so much easier. Just be cautious with the window apron (underneath the ledge [stool]) they are the easiest to break and hard to fix.

I'm Mike by the way, relax... it's going to be an improvement whatever steps you decide to take. I'm sure after reviewing all the opinions on how one might combat a situated vintage home, you'll make the right choice. I've done a lot of reconstruction/remodeling of historic houses in the nation's oldest city "St.Augustine" and first thing we look for are things to preserve. Windows, doors, cabinets, trim, and the molding are always first on the list of things to protect, the uniqueness, and rarity is it's art, and is valued by all who look upon these relics of History. It wouldnt hurt to score,"with a calm precision hand" the window trim. Try not to break off to much of the old caulking as it could damage the trim wood. They can all fit right back in place after the drywall is hung, and with little caulking to fill the cuts. Be sure to take care when prying the window moulding from the pane,not damaging the window or trimming. Flat bars and chisels tend to do this. What I like to use, is a hacksaw blade - not using the handle - and sliding the blade behind the trim to cut the fasteners. And then "number" the backs of the trim from left to right - top to bottem, to where all fit right back, reversing the process. I'm sure your project is going to look fantastic. I'm just glad see there's someone else, such as yourself, willing to preserve history. Goodluck with your project - oh, by the way, the reason I went with number three; you might want to weatherize that window while the trim is off. Stuff some insulation in gaps to make it air clad - and with the little extra money you save, Treat yourself to a nice bottle of fine wine, after a job well done.

Not the answer you're looking for? Browse other questions tagged drywall windows remodeling or ask your own question.

5
Why does the plaster crack beneath the window sill?
1
How do I keep the plastic window insulators sealed when the window has a sill?
2
How can I attach plywood window covers without damaging the trim or shingles?
1
What's the best way/tool to cut a strip of drywall out of my window boxes?
0
Can I use metal J-channel and drip caps intended for roofing as my window casing beads?
0
How can I manage a drop ceiling potentially overlapping the top of a window?
1
How to restore/replace an old wood window without losing daylight opening
0
wrong coloured lead used on replacement window