How do I tell if my house is brick or brick veneer?

I live in a brick house, and am interested in understanding whether it is brick or brick veneer, as a way to understand what kind of risks it (and we) may face during an earthquake.

I hear that brick veneer is essentially a wood frame house with a brick facade and fares better in earthquakes than a pure brick home.

Our house is in the Pacific Northwest of USA, was built in the early 1930s, and is a 1½ story home. Any advice on how I would know one way or the other?

The foundation is bracketed to the wood framing that sits on top of. I assume this means it's a veneer, but would love to confirm. 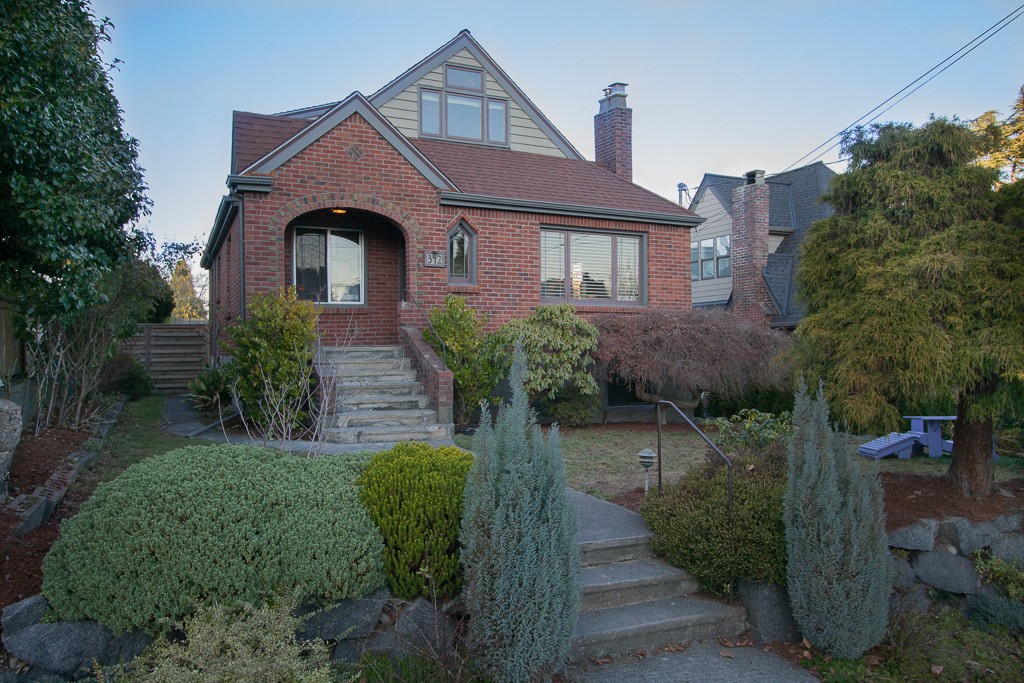 One way is by looking at the bond of the bricks. Your bricks are arranged in a running bond or stretcher bond, which is always one brick thick:

To be a structural brick wall it would have to be more than one brick thick, or have multiple wythes, and you would see headers, like this:

It's likely your walls are wood-framed with single-wythe brick veneer on the outside. But to really know what was on the inside, you would have to see inside them. The easiest way is to remove some outlet covers and look behind the electrical box. If you see an open void, it's a wood-framed wall. If the area around the box is completely solid, you might have concrete blocks making up the structure of the wall.

Beautiful house, by the way.

The frame is of wood. The brick is a cladding on the outside. It is not a veneer. A veneer is fake layer of thin brick-like parquets that are secured with a cement or glue to a backing of some kind. In other words a stone or brick veneer does not have full-sized bricks. Your house does have full-size bricks, but they are not used for structural purposes. It is just a layer or cladding on the outside used as decorative brick and weatherproof surface.

Brick is rarely used for structure in small buildings made in the last 150 years unless they are very small (one room structures). If your house used brick as the structure, it would be obvious because you would have thick 16" to 24" square brick pillars or columns going up through the center of the house upwards from the foundation and the walls would be solid brick. Like you drill through the plaster to hang a picture and there is brick there. Brick buildings do not require interior walls so they were mostly used for factories and warehouses where big open space is useful.

In a brick house there is no framing or sill. There are just big cross beams that sit tenoned right in the brick and the joists hang across them. The walls are all solid brick.

It is hard to know how well a given house will withstand an earth-quake, unless you are a structural engineer. In earthquakes sometimes one house will fall down and another next door stays up. Both quality of construction and design have a factor.

The type of house you have is called a "stockbroker Tudor."

Open a window and measure from the face of the brick to the inside wall. If it's 14 plus inches, that's at least two courses of brick. It will be obvious if it is; questionable if it's any less thick than that.

You'd need to know if it's furring strips or a stud wall (one-by, 2x4's or 2x6's?). 1930's construction, I'd have to assume furring strips, but do as Dirt suggests and look behind an outlet.

A measurement of ~10" could either be a single course with 2x6's, two courses with furring or just a giant gap. You need to find the distance from the face of the wall, to the inner brick and subtract that from your original measurement. Round to the nearest multiple of four, divide by four and there it is.

This method isn't foolproof (for example you might have a structural brick wall where somebody has put up battens before fixing plasterboard), but it's a good indication.

As the answers so far have shown, there are so many combinations of frame and masonry construction that most external signs can be deceptive in one way or another. In fact, with a little ingenuity, one could disguise almost any type of construction as something else. My house is brick & block, but it's dry-lined, so the the exterior walls seem hollow on the inside and the lintels are the same angle-iron one would find on an anchored-brick-veneer wood-framed structure. Even the condo-docs are written up on the assumption that the buildings are wood-framed, since residential block construction is rare in the N.E. U.S.A. . There are even developments nearby with the same floor plans that were built wood-framed, with aluminum siding. My favorite method of determining if a structure is wood-framed would be to look between the floor joists in the basement or crawl space where they go into an exterior wall; if you see a rim joist, it's almost certainly wood-framed from that point, upward. If you see bricks or blocks separating the joists, the walls above are probably structural masonry, though they may well change to wood-framing further up; it's very common to have a ground story in masonry and a wood-framed story above that. The more work you do to the house, the more of its inner secrets will be revealed.

Not the answer you're looking for? Browse other questions tagged brick masonry earthquake or ask your own question.