Trying to understand why a light would be wired this way?

Just moved in to an older home with fiancé and WAS planning to change out a light fixture with a new ceiling fan. However after turning off light switch and breaker and proceeding to remove light fixture I ran into something I felt was strange and later confirmed was very strange to a novice such as myself.

When I removed the fixture to expose the wires I discovered it was connected to two white wires. Not the single black / white I expected and that was at the switch.

Both black wires were taped up together and not used.

I also got nervous over the fact that despite the switch being off apparently it was still live when I used my tester. (I am going to re-affirm this however as I noticed after the fact that my tester lights up and is audible just by waving it in the air near there. Appears something in the attic is causing it to light up, more to come on that)

Either way things weren't as they should be to a novice and thus I promptly shut the project down. I don't play around. I do however find it odd and would love to hear thoughts on how it works this way and why would it possibly have been wired this way? I thought black was hot and white was neutral so if nothing else it would be the black ones used? 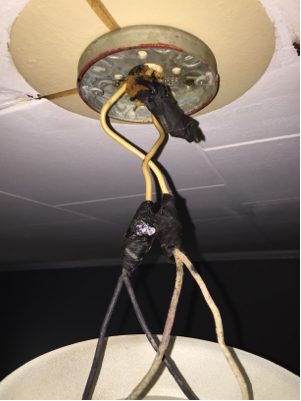 So, the box in the ceiling has two pair coming into it. Two black white pair. One comes from the power source. Think of that one as Line and Neutral. The other one runs to the light switch wherever that is. ( If you open the switch, you should find a black and white on the two screws. )

Double check the box is secure enough to the house to hold the weight of the new fixture.

Doesn't seem that strange at all. I'm not there, and can't probe the wiring to confirm, but this is a common wiring method when power comes to the fixture outlet first.

The meter is likely going off, because there's always power on the black wires.

Again, I'm not there, and so can't probe the wiring to confirm my suspicions. I'm basing this answer on experience, and common practice.

You are correct the Black or Color wire should be the hot/power and the white is the neutral, but as long as the wire is marked with black tape is was okay. Now you stated that you turned off the switch and you still had power at the fixture, that is because whom every wired this fixture may have switched the neutral and not the hot/power, which is no longer code. The easiest way to check is to use your tester and see if you get the same light in the fixtures socket.

1
How should I connect this new ceiling light?
5
Why won't my new exhaust fan wired between switch and light fixture work?
1
How is this 3-way switch circuit wired?
0
Why doesn't my 3-way light circuit work in some configurations?
3
Light Fixture Stopped Working After Replacing Its Three-Way Switch
2
Ceiling electrical box wires -trying to install a light fixture
2
How can I get this light fixture to light up?
0
Old kitchen light fixture was wired backwards, should I reverse it with the new one?
1
3-Way Light Switch Replacement Question