How do I find out the correct pre-charge air pressure for my captive air water tank?

I have a Sears captive air water tank (model No. 390.29171) that stores water pumped from the well. When we took possession of the house, there was no water in the tank or lines, the water pressure gauge was stuck at 95 psi (on at tank with a maximum working pressure of 75 psi), and the air pressure in the tank measures less than 10 psi.

According to the information on the tank label, the pre-charge air pressure should be the same as the cut-in pressure setting of the pump pressure switch.

My question is, how do I find the cut-in pressure setting of the pump pressure switch? If I remove the covers from the two pressure switch boxes, is there something that will tell me what the setting is? 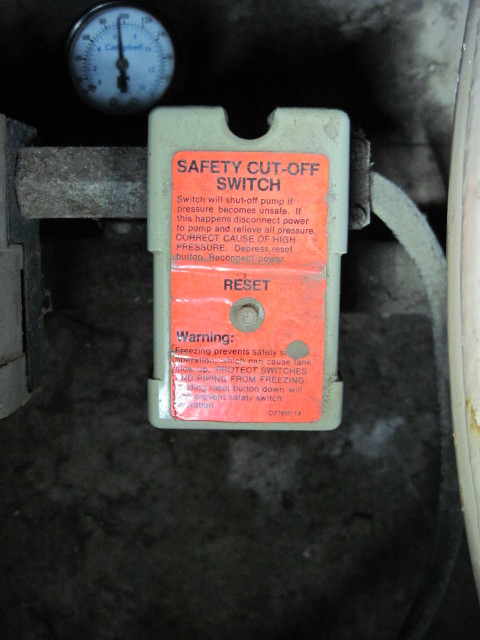 Thanks in advance for any help.

I've never seen a "safety cut-off" on a pressure system before, but typically the switching is done by a single box (known as a "pressure switch"). Pretty much all of them (at least from the last ~20 years) look something like this:

The large nut is used to control the pressure (both cut-in, and cut-out) and the small one controls the range between the two.

Finding on and off pressure

First of all, you need a working pressure gauge to be able to do anything, so replace that.

To find the current setpoints:

Btw, 95psi is really high. Most homes run 40/60 or 50/70. International Residental Code maximum is 80psi (IRC P2903.3.1). Beyond that, you'll potentially start having issues with leaking toilet valves in particular, but other failures are possible as well.

Normally the pre-charge should be set to 2psi below the on pressure, but if your tank recommends setting it the same it shouldn't make a huge difference.

Not the answer you're looking for? Browse other questions tagged plumbing switch water-pressure or ask your own question.

6
How does one know if a well pump is “Short Cycling” or pressure tank is water logged?
1
Water tank will not charge
1
How high can I adjust water pressure in my well tank?
0
PVC piping for low-pressure air line?
1
What is the Correct Hot Water Expansion Tank Pressure
0
Replacing pressure gauge on water holding tank
0
Can I place a Booster Pump after Pressure Tank and before my water softener
0
Depressurized pressure tank - how to pressurize again
0
How to Increase Pressure from Water Tank?
1
Can I just add air to an air-over-water pressure tank?