DIY Tetherball Pole. Screw in or sink it into the ground

I am going to make an outdoor tether ball Pole. It has to be removable as its for a small city backyard. I have two choices.

I like the idea of the threaded pipe. The only negative that comes to mind is that it could be a tripping hazard or a hazard if somebody falls on it.

But what if you attach the coupler to the short pipe and set it in concrete so that the threads are in the ground (the top of the coupler is level with the concrete). Fill the coupler with something before pouring the concrete so you keep the threads clean. I'd probably pack some kind of heavy grease into the threads, as well, to protect them from corrosion and to make it easier to get the big pipe in and out (that could be really difficult to do if the threads rust together while the pipe is installed).

Then when you remove the pipe for storage you can pack a little more protective grease in there and cover the hole with a mat, or put some kind of stopper in it to protect it, and you have usable outdoor space without a pipe sticking out of the ground.

EDIT: @Tester101 has a good point of caution about the potential for the threads to wear and/or deform over time, especially as the pipe is removed and put back over and over, and probably has plenty of stories to tell about things that fell apart. On the other hand, this sort of thing isn't totally unprecedented. You can certainly use components like the galvanized flange pictured just below and get pretty good structural strength.

There's also the old standby portable concrete-filled-tire tetherball pole which works okay and can be moved. So two things come to mind about that. One is that it's a third option. The other is that if it actually works without falling over or making the game no fun (and I'm pretty sure it does), then the forces transmitted from the swinging tether ball may not be severe enough to damage a threaded connection like we're discussing. 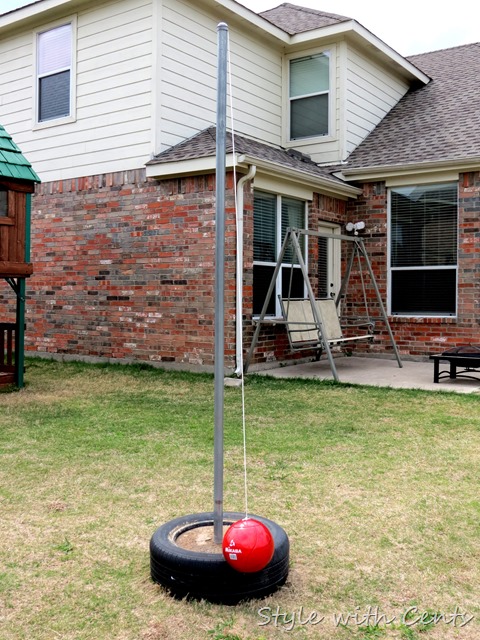 On the other hand, don't underestimate the ability of a dedicated rough-houser to break things. And if the threaded solution did get broken, then you'd have to dig it up and re-do it.

Finally, you definitely can get at least 2" galvanized pipe from one of your local box stores without getting a second mortgage (not that it's cheap): http://www.homedepot.com/p/Unbranded-2-in-x-10-ft-Galvanized-Steel-Pipe-568-1200HC/100565809

You might also check local hardware and plumbing supply stores and other sources online to see if you can get the bigger pipe.

Not the answer you're looking for? Browse other questions tagged plumbing steel or ask your own question.

7
How do I install a washing machine when the drain is 7.5 feet high?
1
Can I sink a hot water copper pipe into the ground and keep the heating functionality
0
Bathroom sink occassionally backs up into tub
2
Kitchen sink draining into catch basin
1
Dishwasher drain backing up into sink
5
Use screw into steel tube without using nut?
0
DIY Corner bathroom sink vanity installation
0
Kitchen sink stopped up and draining into diswasher
3
How to extend brass pipe/conduit that is buried?